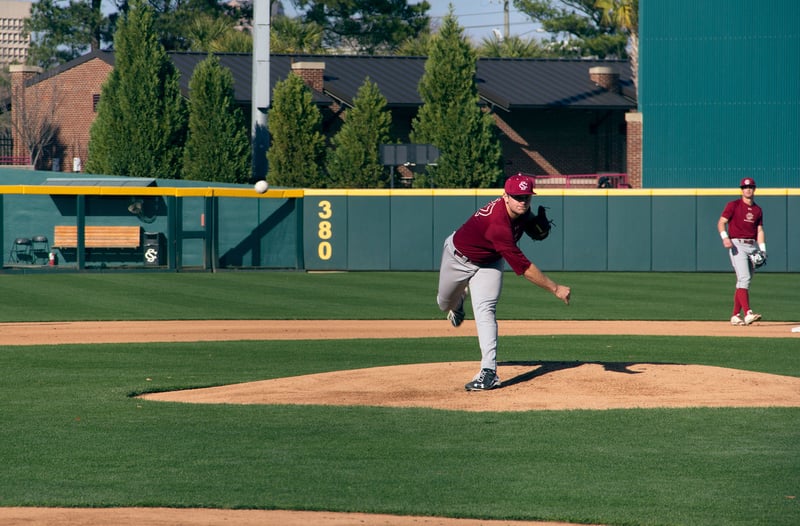 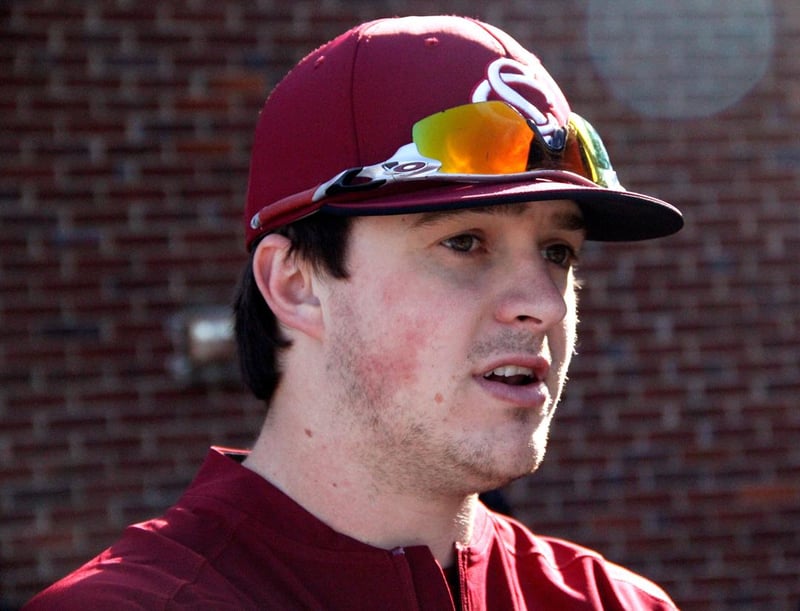 Reed Scott speaks to the media before Friday's scrimmage. The senior pitched in 29 games last season.

The Cowboys swept the Gamecocks last year in the Super Regionals, stopping the Gamecocks two wins short of the College World Series, the pinnacle of college baseball. Williams, an infielder, watched from the dugout as the Cowboys celebrated on the Gamecocks’ home field, and the disappointment has stayed with him almost seven months later.

“I think about it every day. I think about it all the time,” he said. “We wanted it so bad for our seniors, for our older guys who had been here a while. We had a tough couple of years after the World Series [in 2012] and I feel like the chip is there and the guys are getting after it in the weight room.”

A few days after the season-ending loss, a few pitchers were in the weight room at 6 a.m. getting ready for the 2017 season. One of those pitchers, Tyler Johnson, said it was all self-motivated. The goal, he said, was to make it to the College World Series in Omaha, Nebraska.

The Gamecocks, who missed the postseason entirely in 2015, advanced to the Super Regionals after winning four straight elimination games in the first round of the tournament. It was the first trip to the Supers since 2013 when the Gamecocks lost two of three to North Carolina.

Johnson, along with a few other pitchers, said he thought a lot about the early exit from the NCAA Tournament last year and still hasn’t fully gotten over the loss.

“Man, it was tough. Coming off a regional where we had a lot of momentum winning that regional,” pitcher Reed Scott said. “We really expected to win that and go to Omaha. And losing that was tough. Like I said, it leaves a sour taste in our mouths and it’ll be motivation for us this year.”

The Gamecocks started preseason practices Friday, gearing up for the season starting on Feb. 17. The goal for the team is the same as Johnson’s: College World Series or bust.

“That’s what’s on all of our minds. We want to fly out to Omaha in June,” outfielder Alex Destino said. “That’s our biggest goal right now. And I think if we play up to our full potential then we’ll be there.”

Omaha has been elusive for head coach Chad Holbrook and his team the past five years. The Gamecocks, who have been to the College World Series 11 total times, haven’t made the trip west since 2012.

This is the first time since the 2009 season where no player on the team has played in the College World Series.

Morale is high, though, since most of last year’s team is returning. Two of the three starting pitchers are returning and former All-American Wil Crowe, who sat out last season with a elbow injury, is coming back for his junior season. The Gamecocks also return seven players who had more than 100 at-bats last season.

“Anytime you play at South Carolina, that’s the goal of the team. You want to finish the season in Omaha and have a chance to win a national championship,” Holbrook said. “Sure, there’s some disappointment in how the season ended last year coming so close, but there was also some pride shown from our guys.”

The season starts Feb. 17 with a series against UNC Greensboro. Williams, along with catcher John Jones know it’s a long season and think if the team plays up to its full potential, the Gamecocks could be one of the last teams standing in Omaha.

“You fanaticize about it,” catcher John Jones said. “We have the stuff to do it. Now we just have to do it. Hopefully at the end of the year all of us will have been to Omaha.”