All in a day’s work (service dog edition) - DatelineCarolina 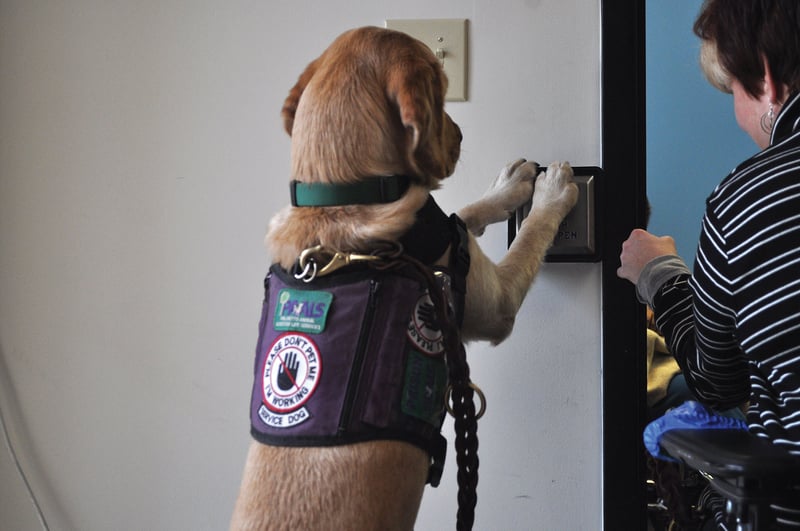 All in a day’s work (service dog edition) 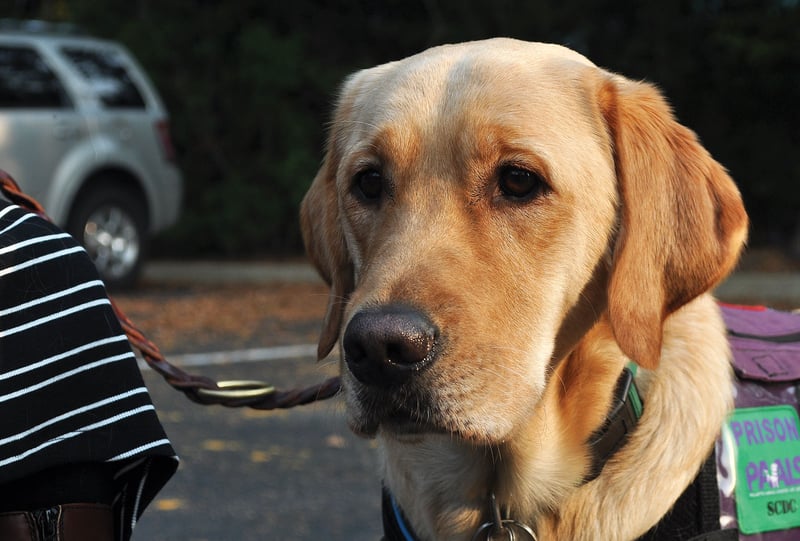 Shack is a 2-year-old Labrador and Golden Retriever mix who is currently in advanced training to officially be released to future handler Dori Tempio. 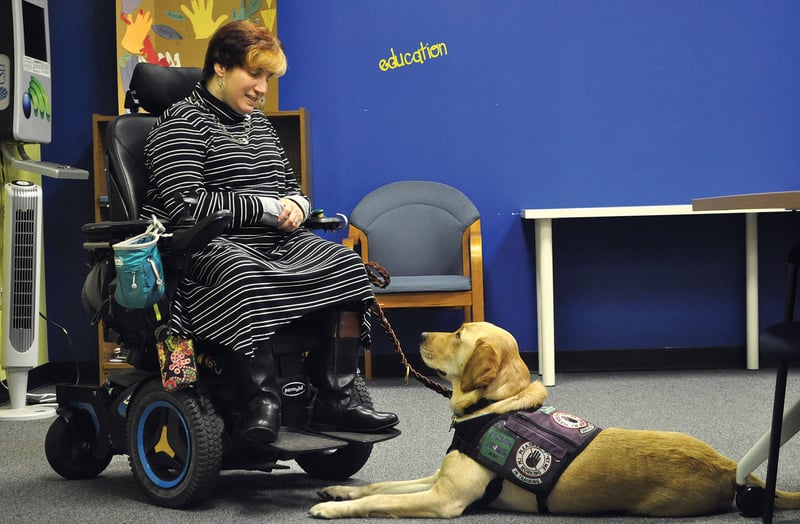 Dori Tempio is the community outreach and consumer rights coordinator for Able South Carolina, an organization dedicated to providing independent living services to people of all ages with all disabilties. “[He's] wonderful,” Tempio said. 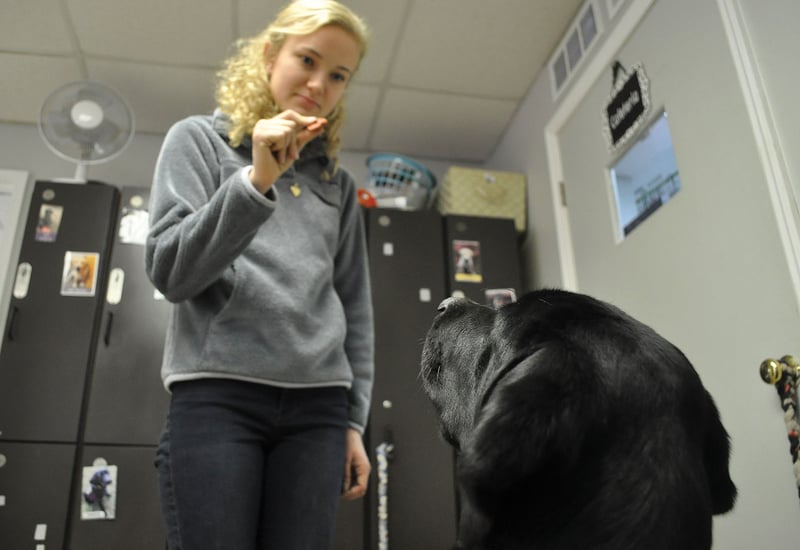 Labrador and Golden Retrievers are successful service dog breeds because of their energy levels and temperments. “It’s really cool to see the person’s demeanor changing as they see how the dog is going to help them,” said intern Rachael McGahee. 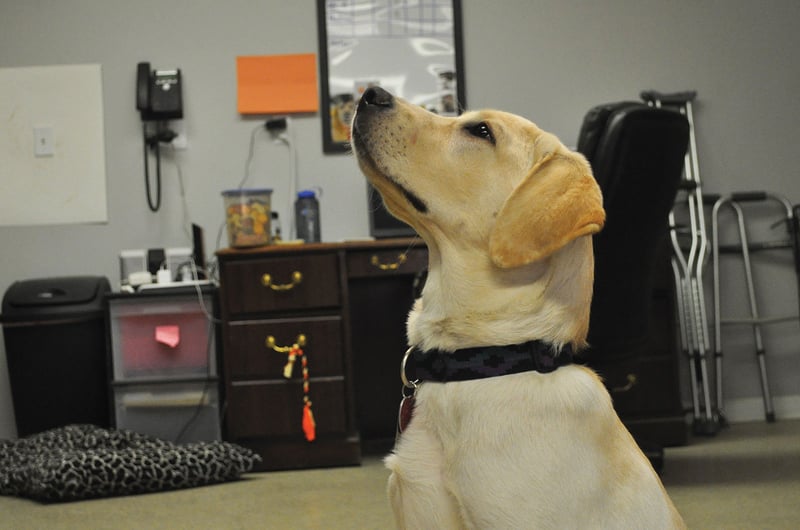 Bonnie, at 5-months-old, is one of PAALS youngest dogs. Soon she’ll enter the Prison Program, where she’ll spend weekdays at the prison getting trained by inmates. “[The program] is a win-win for everyone,” said intern Rachael McGahee. 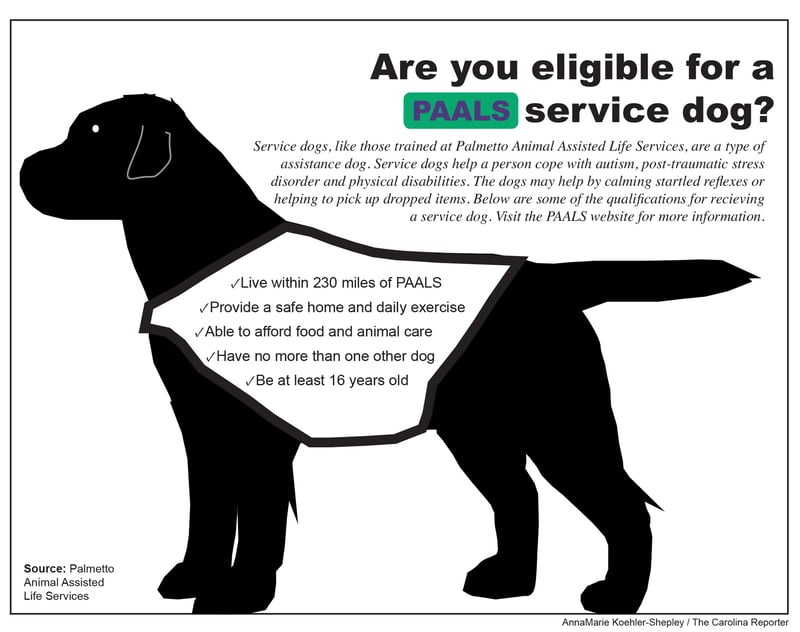 Bustling shoppers, flashing lights, and festive music -- not to mention Santa's North Pole set up right in the middle of pedestrian paths—all signal a shopping mall during its peak holiday season.

But two-year-old Shack is cool under pressure. Despite the cheerful chaos, the service-dog-in-training waits patiently for cues to walk, to stay focused, and to not get distracted by all the sights and sounds of Columbiana Centre mall.

Shack, a Golden Retriever Labrador mix, is training for his certification test so that he can officially be released to his future handler. The test, already impressive in length and content, has the added difficulty element of taking place at the mall.

"The mall is kind of like New York City," said Shack's Palmetto Animal Assisted Life Services instructor Maureen Leary. "If you can make it here, you can make it anywhere."

At the mall, Shack practices disregarding French fries on the floor of the food court, walking past stuffed-animal displays—his favorite toys—without blinking an eye, and keeping his eyes on his handler, even when the most friendly children walk up ready to shower him with attention.

Shack is in advanced training: He completed his basic training but is now putting in extra hours so that he can be comfortable and prepared to assist his future handler Dori Tempio, whose wheelchair adds a new dimension to Shack’s job. Leary said that Shack is adjusting to walking at the right pace by Tempio’s side.

All dogs and clients go through an in-depth matching process where a committee reviews clients’ needs and dogs’ abilities. But Leary said that Shack and Tempio had a feeling about each other from the very beginning.

“The first time Dori met Shack, he went right to her and kissed her right in the face,” Leary said.

Leary said that dogs are very visual learners and even though they have practiced with wheelchairs in training, Tempio’s chair is a little bit different.

“Some dogs aren’t as comfortable with the chairs,” Leary said. “But Shack had no troubles.”

Their relationship is plain to see as Shack rests his head peacefully on Tempio’s lap.

PAALS Board of Directors’ Vice President Sheri Jordan says that it’s easy to tell if a dog is comfortable if you’re familiar with dog behavior. Shack’s relaxed, swinging tail and wide, alert eyes trainers know that he is comfortable and focused on his work.

“We’ll never put a dog in a job that the dog doesn’t like,” Jordan said.

Tempio, community outreach and consumer rights coordinator for Able South Carolina, has had service animals in the past and knows the drill when it comes to the certification test. Tempio's office walls at Able S.C., an organization dedicated to providing independent living assistance to people of all ages with any disability, are lined with photos of her and her husband and of course, her service dogs through the years.

"I've taken the test every year for the last - you don't even want to know - how many years," said Tempio. "Still I get nervous. There’s a lot of external factors that can have nothing to do with you that can cause you not to pass."

Shack, who is a teenager in dog years, is working on focus and tempering his natural enthusiasm before the test.

“Life is very exciting, and Shack loves life,” Leary said. “There’s a lot of things that are very normal things for dogs to do but that he can’t.”

Things like greeting everyone he meets and sniffing out food on the ground are against the rules for service dogs.

Compared to normal dogs, though, the list of things that Shack can do is exhaustive—helping Tempio get dressed in the morning, retrieving lunch from the refrigerator and opening handicap doors are only a few of Shack’s impressive skills.

Shack, along with Tempio's previous service dog Casper, are two of more than 40 dogs that have been specially trained and placed by PAALS. Dogs come from all over the country, and once they get to be about six months old, they begin their extensive training, which lasts about two years.

PAALS rigorous program can be likened to college for service dogs. And just as colleges face routine accreditation, PAALS also goes through a strict accreditation process every five years with Assistance Dogs International, an umbrella organization for service dog training groups. Just as graduates prepare a final thesis before graduation, dogs are certified before finally starting their career.

The PAALS building is even set up as a school, with a main office, a cafeteria and a playground, where the dogs have recess.

But it’s not all treats and playground time for these dogs.

Training includes hundreds of hours of instructional time with trainers and a two-week boot camp with their future handlers, which Jordan calls “exhausting for everyone concerned.” Training also includes things like the PAALS Prison Program, where dogs spend time at the prison during the week and get trained by inmates, and the PAALS Foster Program, where dogs spend the weekend with a volunteer in his or her home.

Rachael McGahee, an intern at PAALS, says that the Foster Program allows the dogs exposure to normal aspects of life that they might not necessarily get at the PAALS Grampian Hills Road location.

“Little things like vacuuming help,” McGahee said. “So that when [the dog] does get placed one day, he’s not like, ‘What in the world is a vacuum?’”

This extensive training doesn’t come cheap: From start to finish, training a dog can cost between $25,000 and $40,000. As an ADI accredited service dog organization, PAALS doesn’t directly charge clients for their dog. Most of the cost is met through fundraising, with clients, excluding veterans and first responders, contributing around $5,000 in tuition for the boot camp training.

McGahee says that spending time with puppies at work is great, but that her favorite part is seeing the direct impact the dogs have on people.

“I met a veteran who had PTSD and he was paired with one of our dogs named Cookie,” McGahee said. “You could tell that his whole life was changing just by seeing how this dog was going to help him. Seeing him work with this dog and seeing it happen was really cool.”

Service dogs help with post-traumatic stress disorder by easing the individual’s fear or anxiety and acting as a buffer between the individual and the world. PAALS also trains dogs to assist individuals with autism or physical disabilities, such as with Tempio, or to work in educational or healthcare facilities.

As a component of PTSD, Jordan said that some PAALS clients have experienced traumatic brain injuries, which can make remembering all of the training cues difficult.

“They can be struggling so much and then they get this dog that can help them so much, but it’s a whole new struggle,” Jordan said. “The dogs really help them, though, once they get through that.”

Jordan and Leary both stress the importance of the team effort between the dog and the handler, an aspect Tempio and Shack seem to have figured out.