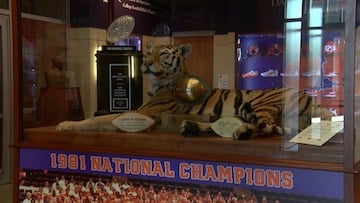 Clemson leads the all-time football series against USC 67-42, with four ties. This year, the Tigers are trying for three straight wins over the Gamecocks. 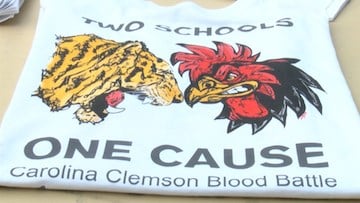 USC has won the blood drive competition against Clemson each of the last eight years.

Sarah Roof has reason to be cocky. She is a senior at the University of South Carolina and a third-generation Gamecock.

"Carolina is my home and my family legacy. It's molded me into the person I am today," Roof said.

Clemson University senior Myles Nelson, meanwhile, grew up in Maryland, but when he first visited Clemson, it seemed he had been born to be a Tiger.

"[Clemson] picked me, honestly. People say there's something in these hills; it's very true," Nelson said.

Both Roof and Nelson take great pride in their colleges. But they respond a little differently to mentions of each other's school.

"The cells in my body kind of reject it," Roof joked about the word "Clemson" and the school's tiger paw logo.

Their thoughts reflect the long-entrenched rivalry between USC and Clemson. It can be said to have begun in the 1880s, when dissatisfaction with the agricultural education offered at USC (South Carolina College at the time), voiced mainly by Upstate farmers and future governor Benjamin Tillman, paved the way for Clemson's founding.

But football has certainly brought it the most notoriety. USC and Clemson first met on the gridiron in 1896, and they have played each other every year since 1909. This makes their annual showdown the second-longest continuously played rivalry game at the higher level of Division I college football.

The intensity of the rivalry has spanned decades. Sam Blackman is Clemson's athletic communications director and athletic department historian. He says one of his favorite stories about the rivalry involves the 1946 Carolina-Clemson game, when many counterfeit duplicate tickets were discovered.

"They weren't going to let people in, so people crashed the gates. There was nowhere for them to go; they ended up going out on the field. [Clemson] Coach [Frank] Howard told me that this big woman with a big hat on stood in front of him the entire game, and he had to ask her what was going on out at the field," Blackman said.

One of the enduring recent images was the brawl between the Gamecocks and Tigers near the end of the 2004 game.

University administrators say the drive to be better than their rival has made both institutions better as a whole.

"It enhances you, if you have a rival. Competition is what made this country great," Blackman said.

"As far as what we can produce in our students, the opportunities and the programs we can offer, and the level of excellence we can provide, I think that spurs on Clemson. And I think when they do the same in the academic arena, it spurs us on," said Jerry Brewer, USC associate vice president for student affairs.

Blackman and Brewer also appreciate the community service the rivalry has helped motivate. For the last 32 years, the USC and Clemson communities have competed to donate more blood to organizations such as the American Red Cross the week before the football game.

This is also the second year the schools have tried to earn a point in the Palmetto Series, a yearlong multidisciplinary competition between them, by donating more food to food banks.

"They're great education points for us to use athletics to educate people about service and get their participation," Brewer said.

So no matter what happens this Saturday at Clemson's Memorial Stadium when the Gamecocks and Tigers play for the 114th time, the students and people of the Palmetto State may be the real winners.

But that doesn't mean fans like Nelson and Roof will stop seeking bragging rights anytime soon.

"You always hear the small things. Someone will make a joke just about Carolina, in general, just in class," Nelson said.

"I have a lot of respect for Clemson University, every day except the last weekend in November," Roof said.