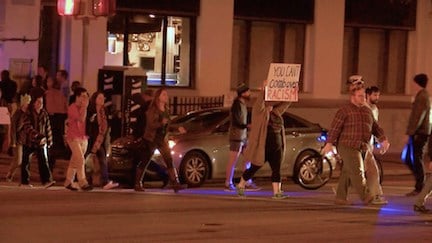 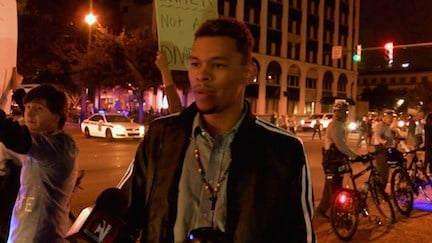 Lawrence Nathaniel took to Main Street with protesters angry over the elections outcome. Nathaniel feels that his rights as a citizen may be lost with Trump as President. 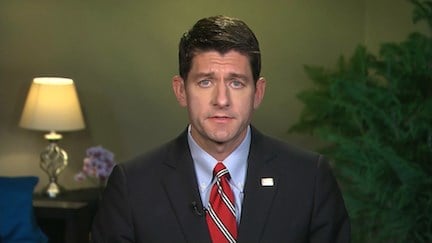 House Speaker Paul Ryan addressed the protests across the country, telling people that under the Trump administraion, America will be an inclusive country.

Many people across the country have been protesting the outcome of the presidential vote.  Those protests reached Columbia Friday.

Hundreds of protesters came to the State House, waving signs and chanting "Dump Trump," "No Trump, no KKK, no racist USA," and "Stop the hate".

The protests have hit over 50 cities across the country, and in some cases, like in Portland, Oregon, have seen them turn violent. Columbia protesters were aware that the world would be watching, and urged on their Facebook page, which was shared with over 1000 people, to make their protest peaceful.

Lawrence Nathaniel was a leader of the protest, that moved up and down Main Street. He also spoke to the crowd in front of the State House, talking about the problem America is facing.

"This election we may have lost our enthusiasm, but we're gonna come out stronger than before," says Nathaniel. "The only way we can have our voices heard."

Nathaniel sees the goal of the protest as a purpose for those who feel belittled by the Trump administration.

"I believe in change for our Muslim communities, where they don't have to feel unsafe. Change in police reform, and change in prison reform. We have more prisons than we have schools, and we have more inmates than we have students," said Nathaniel.  "That's not how America is supposed to be."

"America is a pluralistic, inclusive country. It is, it has been, and it will continue to be, so I really think that people should put their minds at ease," says Ryan. "We're going to get to work on solving the big country's problems."

Another protest is scheduled for this Friday, and Nathaniel hopes to keep it as peaceful as last week's.