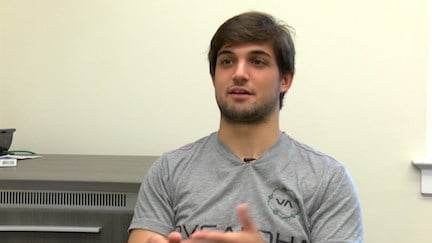 Mike Senatore says because of his viral sensation, people will go up to him and video tape him for no reason.

Mike Senatore was just a regular high school kid before his school talent show, where he showcased his "talent" to his high school, and the world.

"I wanted to be in the talent show but I didn't really have a talent, but I could flip a water bottle. I figured, why not that?" says Senatore, a freshman at USC.

Video of his water bottle flip, tossing a bottle so it lands upright,  went viral on the Internet, and with it, came the calls from major TV stations.

"I've been on Stephen Colbert's show, the Harry Connick Jr. show..." says Senatore, as he goes on to list the many TV shows he's been on.

The water bottle flip may look easy, but the pressure of the shot, which had to land perfectly with the background music he chose, was no small task, but Senatore makes it look easy.

"It's all about the flick, you just want to flick it down with your finger," explains Senatore.

The talent may have been just another viral fad, but Senatore knows that those moments are ones you hang on too.

"I mean there's so many possibilities in life. You just never know, like the bottle, you never know what stupid thing you do will lead to another experience in your life," Senatore said.

A possibility that came with action. Soon after his viral video swept across America, Senatore started #FlipforaCure, a way to raise money and awareness for the American Cancer Society. Senatore lost his dad to cancer when he was 13, and wanted to see his brief fame go to something worth while.

"It impacts you just like my father's impacted me. It made me wanna make a difference. I think it opens peoples eyes to the real big picture," Senatore says.