Hurricane Matthew flooding could wipe Nichols off the map - DatelineCarolina 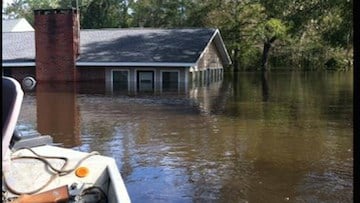 Hurricane Matthew flooding could wipe Nichols off the map 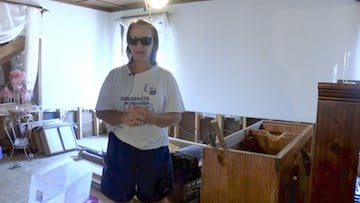 Kathy Turner hopes she and her family can do all of the repairs to their house themselves. 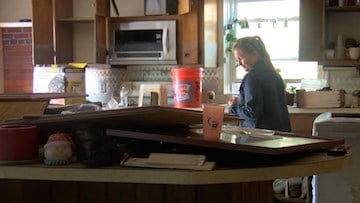 Cindy Rouse tried to salvage as much of her stuff as possible by stacking it on counter tops.

It's been nearly a month since Hurricane Matthew hit South Carolina, but the town of Nichols is struggling to recover.  The small town only had 22 businesses before the storm, and every single one of them flooded.  Several of these businesses do not plan to reopen, including First Citizens Bank.

Mayor Lawson Battle says most of the town's 400 residents are retired or disabled and do not plan to return to their homes because they cannot afford to repair them.

Kathy Turner and Cindy Rouse are exceptions.  They live in Nichols, and their families were victims of the hurricane's flooding, but they plan to rebuild.

Turner's home is miles from the nearest river, but that did not keep her safe from the flooding that consumed the entire town.

She does not live in an area that is considered a flood zone, so the Turner family did not have flood insurance before the hurricane.  She said she is definitely getting flood insurance now since her home was flooded.

The Turner household had six inches of water in the downstairs kitchen and bedrooms, and a foot of water in the living room.  She said when the flooding started, she and her family tried to save all they could.

"We had a small boat... and we anchored it to the front porch.  We began picking things up that we could and taking them upstairs," said Turner.

Rouse and her family don't live as far from a river.  The Little Pee Dee River runs only a few yards from her door steps.  Rouse said flooding is to be expected when living so close to a river, but she didn't expect anything like the flooding Hurricane Matthew brought.

"I thought if it got in the house, it'd be a couple of inches.  Maybe a foot at the max, and we were prepared for that," said Rouse.

What they were not prepared for was the over five feet of water that flooded the home.

The family tried to stack as much of their stuff on counter tops as they could, but the flood waters destroyed nearly all of their belongings.

Turner and Rouse have positive attitudes about the future, and both plan to rebuild and repair their homes.  They are hopeful they will receive federal assistance from FEMA, but both homes are still in the inspection process to determine their eligibility.