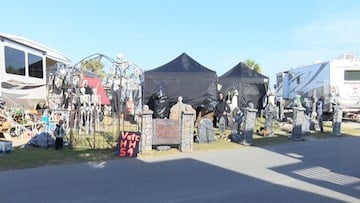 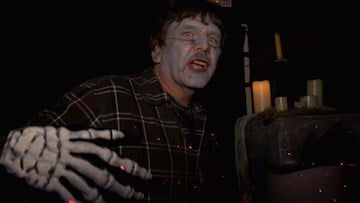 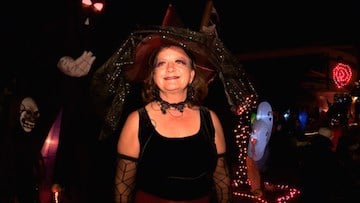 Janet Clayton stands at the exit and gets a good laugh from all of the grown ups who scream and run out.

Some families carve pumpkins, some trick or treat together but the Clayton and Robertson families create the scare that people look for at Ocean Lakes family Campground on Saturday night before Halloween.

These families spend their family vacation preparing for Saturday night of Halloweekend at Ocean Lakes Family Campground in Myrtle Beach. This is their fifth consecutive year decorating their campsite. The other campers walk around the campground and visit attractions like this, free of charge.

Eddie Clayton is one of the masterminds behind the decorating. He creates all of the electronics and lighting. He also makes all of the animatronics out of wire, PVC pipes and Halloween costumes.

The Robertson's made some of the other props at the campsite like the tombstones and the cemetery gates. Those are carved out of pink foam board and hand painted to look like stone. Over half of all of their decorations are hand made so the preparation for this spooky attraction takes all year.

When asked why they do what they do, the answer was simple.

"The kids faces. There is nothing any better than to see that smile on a kids face," said Eddie.

The memories they make every year make all of the preparing that much more enjoyable.

"There was one little guy, bless his heart, last year when we were down here he would come through the tent he wouldn't look at anything, he wouldn't do anything. He would bolt straight through and he would go right back around and get in line. We counted him at least ten times," said Eddie.

Eddie and the others enjoy a good scare but Eddie's wife Janet prefers to stand at the exit instead of being part of the show.

Janet is very much a part in the planning, she says she tells her husband Eddie what to build and he builds it.

All of the hard work paid off for both families. Their campsite, HH54, won first place in the Creepy Site Crawl campsite decoration contest which was judged by other campers.

"I didn't go in, I saw someone waiting inside and I decided it was a little too scary for me," said Blackmon.

The Clayton and Robertson families will hit the clearance section after today to rack up on decorations to make their campsite bigger and better in the years to come.