DaSean Daniels: A student-coach who has cheated death twice - DatelineCarolina 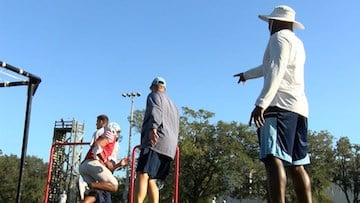 DaSean Daniels: A student-coach who has cheated death twice 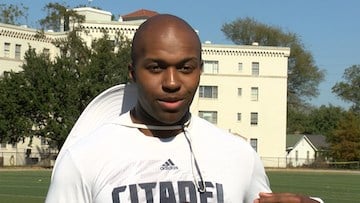 DaSean says the Bulldogs are just taking one week at a time, keep focus on the next opponent not really worried about the record 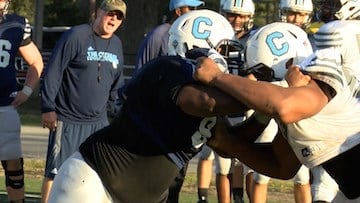 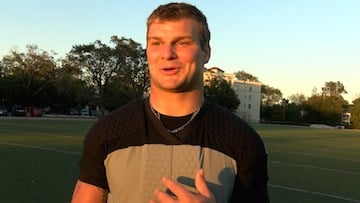 One student at the Citadel in Charleston has defied the odds and cheated death not just once but twice.

DaSean Daniels is a student coach for the Citadel football team, and with an undefeated season, the Bulldogs are working hard the closer it gets to game day. DaSean loves that his team has gone so far, but part of him wishes he could be suited up for game day.

He was 19-years old when he was diagnosed with a cancer called Ewing Sarcoma. It's a cancer that forms in bone or soft tissue, and is most common in young adults. He was having pain in his ribs, but when he went to the doctor for examination they told him it was nothing more than rib inflammation and would soon go away.

"Soon" however, turned into seven months and the severe pain forced him to spend Christmas in the hospital.

"They found what was a tumor in my ribs and then I had to do a biopsy and some other things to figure out if it was malignant or not and sure enough it was", said DaSean.

When he heard the news the one thing he was really worried about was his ability to play football again.

"They were talking about having surgeries that basically they were going to pull out the ribs that were near the tumor and it would physically impair me for the rest of my life", said DaSean.

Instead DaSean decided to take his chances with chemotherapy and radiation treatments, and a year-and-a-half later the cancer was officially gone.

Not long after he beat cancer, DaSean would be tested once again.

"I can remember the beginning of the practice. We were doing 1 on 1 drills, and I hit someone and I told one of my teammates I was dizzy and that was the last thing I can remember. Apparently I got through most of the practice [...] and we lined up in the backfield and I just kind of collapsed", said DaSean.

A brain hemorrhage caused him to pass out.

"It was a dark day, it was rough I mean everyone was really worried. He just fell over and no one really knew what was going on," said Citadel football player Tyler Renew.

Roper Hospital is less than a 10-minute drive from the Citadel and the doctors were able to save DaSean life. It was a close call, doctors say if he arrived 15-minutes later he would have died.

"They basically had to cut open my head to relieve the pressure and when I woke up I was walking around for a few days with part of my skull gone. They were able to put it back in and that was the end of my football career," said DaSean.

He was forced to cut his football career short, but he continues as a student coach, and inspiring his team through all he has overcome.

"He was a phenomenal player and he's a phenomenal coach now. To have him out here with us and to see him every day and know the things that he's been through in his life and that he still conquers it and comes out here with a smile on his face [...] is very uplifting. If you really think about DaSean and everything he's been through your worse day is never that bad," said Renew.

DaSean has a positive attitude and a smile on his face and he says this all happened for a reason.

"My faith [in God] goes up and down, but I'm steadily working on it. In my opinion that's the reason why all of this happened to me, and I'm grateful it's all working out," he said.

The Citadel Bulldogs are 8-0 this year... and DaSean says he is honored he still able to make his mark in school history.

The Bulldogs host Samford in their homecoming game this Saturday at 2:00pm.