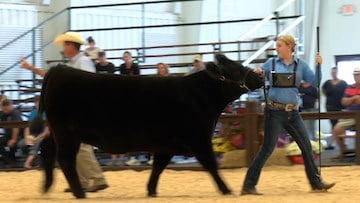 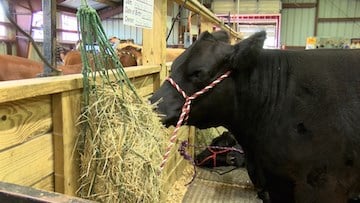 Sable spends time in the cattle barn while she waits for her show. 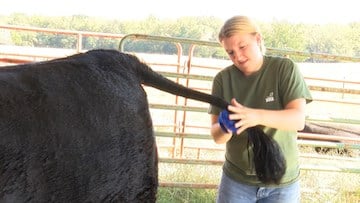 Showing cattle is one of the oldest State Fair competitions, dating back to the fair's start in 1840 when the fair was held on Elmwood Avenue.

Brooke Shealy is a cattle showman. She spends her weekends competing at cow shows. This week she's competing at the South Carolina State Fair with her cow, Sable. When she's not competing Sable lounges in the cattle barn at the fairgrounds. Brooke says Sable loves the attention she gets while on display at the fair.

Brooke and Sable are apart of Spartanburg County 4-H Beef Club. Brooke has been showing cows for four years. She began showing cows when she was a senior in high school and competed in her first cow show for her senior project. Students were encouraged to try something new and Brooke liked showing cows so much she's been doing it ever since. Now she's a college student at Lander University. This is Sable's second year competing at the State Fair.

"She gets her little attitude where it's her way or no way. But for the most part she's real laid back. She's real content with letting people pet her and that sort of thing." Brooke said.

A lot of work goes into getting Sable ready for competition. She gets groomed at least once a day and, on show days, more than once. Her grooming starts with getting all the loose hay and dirt blown out of her hair with a blow dryer. Then she's bathed with special shampoo and conditioner. And last, she has her hair combed and blow dried.

Sable is judged on the size of her body. She is

This process seems to work for Brooke and Sable. They took home Third Place in the open breed beef show on Thursday, October 20. Sable is also seven months pregnant and weighs over 1400 pounds.

"This is my last year showing the cow but I'll still be around the barn. Hopefully my cow will calve a calf that is able to be shown by some of the younger members of my 4-H club." Brooke said.

Some cows are sold for beef when their show career ends. But Sable isn't going anywhere. She's going to stay around the farm and have calves that Brooke hopes will one day be show cows as well.