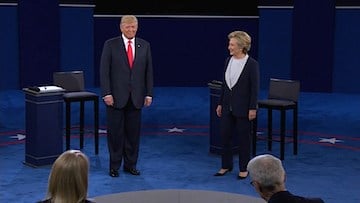 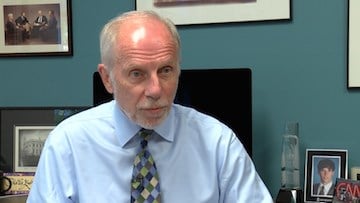 Former CNN Senior Washington Correspondent Charles Bierbauer says Trump's past is impacting how voters gauge his character in the present and future. 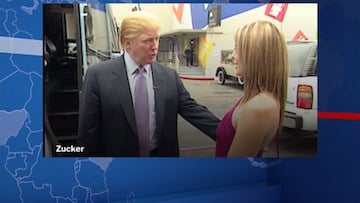 Donald Trump embraces "Days of Our Lives" actress Arianne Zucker after his lewd remarks were caught on tape in this 2005 video published by the Washington Post on Friday.

The candidates took to the stage for the verbal sparring much without so much as a handshake after a 2005 tape of Trump making degrading remarks towards women surfaced last week.

"As a woman, I'm not going out there to greet him. I'm not going to get within arm's length of Donald Trump because of the things he says he does with his arms and his hands," said Charles Bierbauer, former CNN senior Washington correspondent and current Dean of USC's College of Information and Communications.

"He has said that the video doesn't represent who he is, but I think it's clear to anyone who's heard it that it represents exactly who he is," Clinton said.

"If you look at Bill Clinton... far worse. Mine were words, his were actions," said Trump.

But Bierbauer says Trump's attack on Bill Clinton is irrelevant.

The release of the controversial tape plays a huge role on how potential voters view Trump, according to Bierbauer.

"A month before election day, Donald Trump is dealing with something that happened 11 years ago, but it is still a factor in how people are gauging his character," he said.

Trump could struggle to look towards the future if his past continues haunt him.

The Commission on Presidential Debates listed date and format information for the third presidential debate on their website.

Remember, you can also verify claims made by each of the presidential candidates by fact checking.