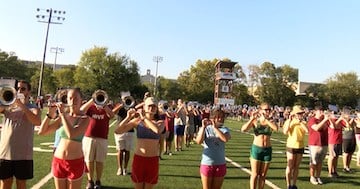 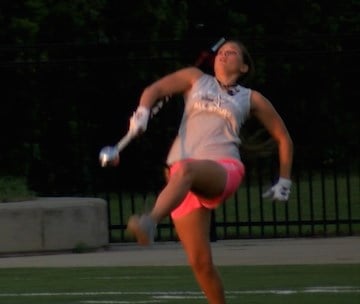 Bogdan practices running out onto the field to start the pregame show. The drum majors will then turn and cue the band to play its first piece, the Gridiron Fanfare. 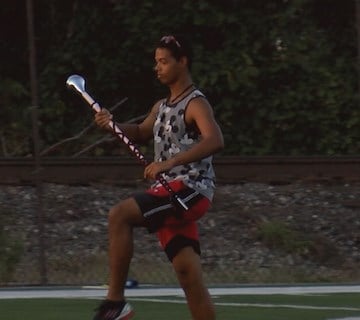 Davis high-steps while carrying the mace. He says he begins every gameday by listening to his CD of Carolina Band songs.

When fans at Williams-Brice Stadium hear the Mighty Sound of the Southeast, they hear the results of dedication.

The University of South Carolina marching band prepares for Saturday football games with 90-minute rehearsals Tuesday through Friday evenings. Its members also gather six hours before kickoff on game day, rehearse for another 90 minutes, and then begin performing at pep rallies and tailgates.

Claire Bogdan is one of three drum majors in the Carolina Band. She says the rehearsals are challenging.

"We have so much to do during the hour and a half, so you have to constantly be mentally engaged and physically engaged," Bogdan said.

"The hardest part is just keeping a positive and happy face while my shins feel like they're going to split in half," Davis said.

Still, Bogdan and Davis thrive in pregame. Both say it is their favorite part of game day.

Bogdan especially enjoys executing the toss and catch of the mace the drum majors carry.

"Everyone is behind you and everyone's watching you, and once you finally go down on the ground and catch it, it's just an amazing feeling," Bogdan said.

The Gamecock football team will be practicing hard before hosting Georgia Saturday night, and the Carolina Band will also be working to give fans something to cheer about.