Lost Traditions: One man makes his way to Columbia to showcase h - DatelineCarolina 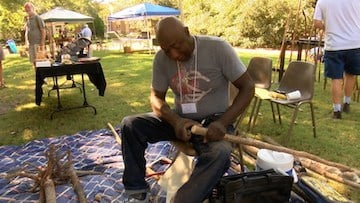 Lost Traditions: One man makes his way to Columbia to showcase his passion for woodcarving 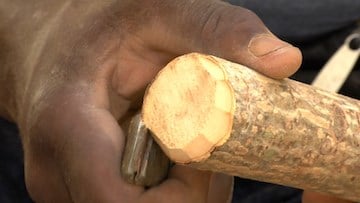 Williams says wood carving has been in his family for generations. 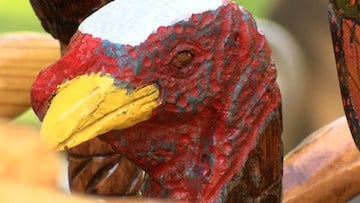 Williams says the wood tells him whether to carve a duck's head, or even a gamecock's

USC's McKissick Museum is celebrating the art of woodcarving with an exhibit that spotlights some of South Carolina's artisans. The event is called Folk Fabulous Festival and was showcased this weekend on the USC Horseshoe.

One of the artisans displaying his skills was, Thomas Williams, who has been carving for 30 years. He says members of his family have been wood carvers four generations.

Williams has what he calls a gift for a good eye.

"When I look at a stick... you say it's just a stick, but I already see a design in that stick. So whatever the stick speaks to me, that's what I carve," said Williams.

His materials come from the woods around McClellanville, and he uses just a knife to create his beautiful masterpieces.

What could start off at first as cypress, dogwood, or oak branch is transformed into a cane. He also enjoys carving tables and lamps. He says if you give him a picture... he can make it.

This event is in collaboration with the Columbia Arts Commission, and coordinators for the McKissick Museum say they like to point the spotlight on South Carolina traditions.

"We do something called field work, which means we go out in the field, and it's our job and our training to find people to know where to look for them, to know how to approach them," said Laura Marcus Green, the Director of Folk life and Traditional Arts Program.

Green found Williams, who says his passion for wood carving is his gift and living legacy, to highlight the display's grand opening.

"It's hard to believe that this was done in my generation, and they did this from slave plantation to now, 2016, and it's still going," said Williams.

He continues that legacy by making one cut at a time.