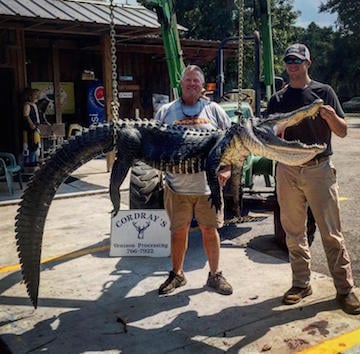 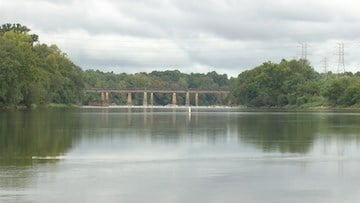 You won't find many gators here on the Congaree River, but the rivers and lakes of the eastern Midlands and middle coastal regions have far more. 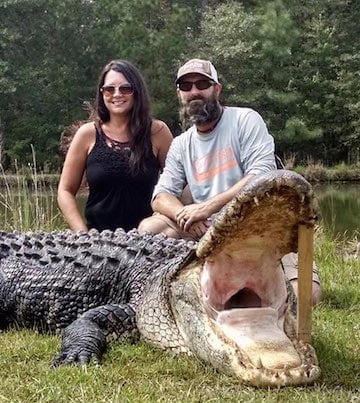 Melissa Davis and Jonathan Smith hauled in a 12-foot-10-inch, 809-pound gator on Lake Marion on the first day of gator hunting season.

Patrick Walters was in for a fight.

A day after spending 11 hours unsuccessfully trying to catch an alligator on bodies of water around Santee, S.C., he and his father set out on the Cooper River and found their target.

"I look over on the bank, and all of a sudden, here comes this gator walking down the bank," Walters said. "I'm just like, 'You've got to be kidding me! What are the odds of this?'"

South Carolina state law requires hunters to capture a gator and bring it to the side of their boat before killing it. After a two-hour battle, Walters finally came face to face with the 10-foot-half-inch reptile.

"By the time I get this cartridge out of my pocket," Walters said, "the gator opens his mouth, and he's starting to bite at the boat, and I'm freaking out."

Eventually it was his—one of several massive catches already recorded during this year's public alligator hunting season in South Carolina. Three gators about 13 feet long were caught in the first nine days of the season, which began Sept. 10 and continues through Oct. 8.

About 4,400 people applied for a tag to hunt alligators this season, according to Jay Butfiloski, fur bearer and alligator program coordinator for the South Carolina Natural Resources Department. One thousand tags were issued, and in previous years with this allotment, between 300 and 350 gators have been caught.

All this adds up to important benefits to the state. First, gator hunting can help make sure the animals and humans keep a safe distance apart.

Some of the alligators caught "were a little bit too familiar with people," Butfiloski said. He continued, "They hung around boat docks and other places where they were sort of a nuisance."

"We have a number of processors in the state; we have a number of guides in the state," Butfiloski said. "And we also have some of the traditional, fishing-resort-type areas where people would come and spend a few days fishing on the lake or something, but now those same people go and they stay in hotel rooms [or] some of these campgrounds during alligator hunting season."

For the hunting community, it's an experience worth getting excited about. Walters and his father garnered interest of their own as they reeled in their big catch.

"There was like five people watching us by that time," Walters said, "because we're in the middle of a canal, and everybody's hollering and screaming about this thing."