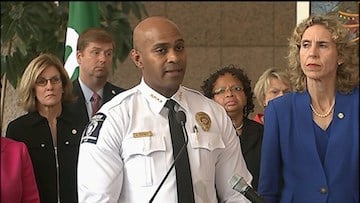 Charlotte Police Chief Kurr Putney told reporters they found a gun and no book at the shooting.

Violence erupted in Charlotte on Tuesday with the news of a shooting by a police officer on a black man.

Keith Lamont Scott, 43, was shot just after 4 p.m. Tuesday by police. Law enforcement were searching for a suspect when they say they saw Scott come out of his car with a gun. Reports say Scott went back in his car and exited the car, again with the gun in hand. That’s when Officer Brentley Vinson opened fire and fatally shot Scott.

Charlotte Police Chief Kerr Putney said they recovered the firearm Scott had. Scott’s daughter, who was live-streaming the incident on Facebook, claimed Scott had nothing more than a book in his hand, and he was waiting for the school bus to drop his son off.

The different claims about the shooting brought on protests throughout Tuesday night.

“I can tell you a weapon was seized -- a handgun.  I can also tell you we did not find a book that has been made reference to," said Putney Wednesday.

Protesters held signs and chanted, “No justice, no peace,” and “Hands up, don’t shoot.” As the night went on, the protests turned more chaotic. Protesters started throwing bottles and rocks at police, stores and tractor trailers were looted, and several vehicles were damaged.

Sixteen police officers on Tuesday were injured in the protests, as they used tear gas and riot gear to break up the crowd.

Activists and leaders in the African American community called for major change around Charlotte, and around the world.

“Let everyone feel the pain economically of what we're feeling physically when you kill us. That's what we're calling for, we're calling for economic boycott in the city of Charlotte. Don't spend no money for white folks that don't respect us.” said B.J. Murphy, an activist from Charlotte.