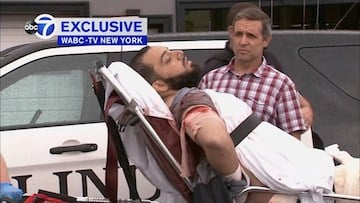 Rahami's fingerprints were found on this pressure cooker bomb. 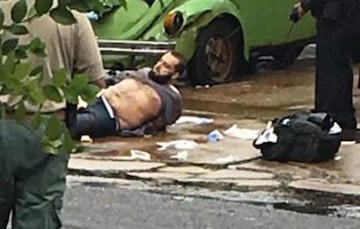 Rahami was injured in a shootout with police.

Authorities have apprehended a man wanted in connection with Saturday night's terror attacks in New York and New Jersey.

Ahmad Khan Rahami, 28, has been charged with five counts of attempted murder of a police officer, after a shootout with police during his arrest. Two police officers were shot during the gunfire exchange, but their injuries are not life threatening.

Authorities identified Rahami as a suspect through finger prints on a pressure cooker bomb that never exploded in Manhattan. Rahami was then found sleeping in the doorway of a bar in Linden, New Jersey.

Police think Rahami is connected with three bombs found in New York and New Jersey over the weekend. One exploded in the Chelsea neighborhood of Manhattan and injured 29. The bomb found in New Jersey detonated as police tried to defuse the bomb. The third bomb was found in Manhattan but never exploded.

Authorities say police presence has increased in the city, as New Yorkers try to return to their normal lives.