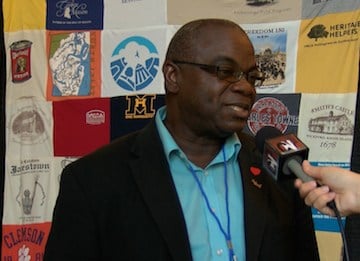 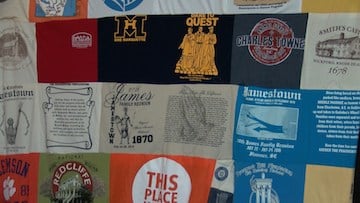 Quilt of locations Joseph has stayed in.

Joseph McGill has spent the last six years sleeping in slave dwellings. What started as a one-year adventure has turned in to something much more for him as he has spent the night in over 100 historic slave dwellings in over 17 states, all in the name of his project, The Slave Dwelling Project.

Over half of the dwellings Joseph has stayed in have been in South Carolina, and he says there are still many more to go. He is working with the University of South Carolina to get permission to stay in the slave dwelling behind the President's House on the Historic Horseshoe.

"Hopefully I will have access to it, you know, spend the night in there with some students and we could, you know, further explore the slavery associated with institutions of higher learning," Joseph said.

The South Carolina native has deep interest in the slave dwellings of his state and is spending time in Columbia for the third-annual conference honoring his project. History lovers around the country gather at the Columbia Metropolitan Convention Center for three days to learn about his experiences in slave dwellings. Attendees will also hear from a panel of people who have had some part in slave history and from historians who have spent their time researching and learning about the enslaved people of the United States.

"Because South Carolina is such, and has such a rich slave history, this is fertile ground for this project to be nurtured," Joseph said.

Joseph won't slow down any time soon. He plans to continue traveling, sleeping in slave dwellings and shining light on the enslaved people of this country whose voices have been lost in time and history.