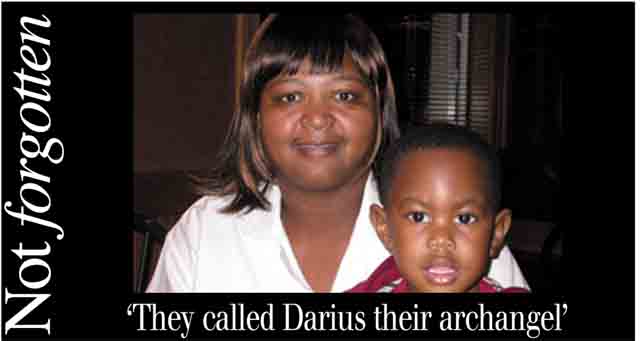 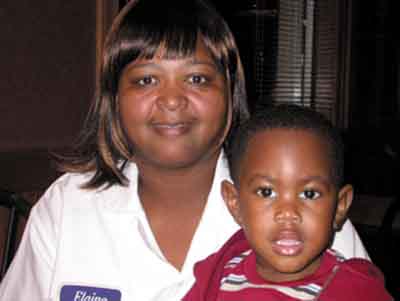 Elaine Johnson holds her two-year-old godson, Alshaun, in her lap. He came to live with Elaine shortly after her son Darius was sent to Iraq.

ORANGEBURG, SC-   Elaine Johnson turns to look at her godson.  Two year-old Alshaun clutches a crayon while she talks about someone he’ll probably hear a lot about over the course of growing up in Elaine and John Johnson’s home.

“He reminds me a lot of Darius,” she says.  “Darius was always a well-dressed young man, even when he was a little one.”  Alshaun is wearing a matching red sport suit and baseball cap, very toddler chic.  He uses his free hand to tip over the salt shaker, surveys the assemblage at the table, and squeals with delight.  “He came to live with me in March of 2003, just after they sent Darius off.”

Twenty-two year-old Darius Jennings, Elaine’s son, died six months after being deployed from Fort Carson in Colorado.  He was one of 13 soldiers killed on November 2, 2003, when a shoulder-launched missile brought down the Chinook helicopter carrying him and around 30 others from the hotspot of Fallujah to a week of “R and R” in Baghdad.

It was one of the bloodiest days of the war in Iraq.

Speaking that day from a Pentagon pressroom in Washington, Secretary of Defense Donald Rumsfeld said, “In a long, hard war, we’re going to have tragic days.  But they’re necessary.  They’re a part of a war that’s difficult and complicated.”

Sitting at a table tucked in the back corner of the Orangeburg Shoneys, Elaine Johnson says,  “I don’t like wars.  I’m not a violent person.  I just don’t like violence.”

Most difficult for her is that insurgents celebrated in the streets of Fallujah after shooting down the helicopter.  “Why did those Iraqis have to dance and cheer about shooting my son?” she asks.

Johnson, 41, is something of an anomaly among families of South Carolina’s fallen soldiers in that she has been openly critical of Operation Iraqi Freedom and President Bush.  She was featured on a CNN segment shortly after her son’s death, and has continued to speak at anti-war rallies in places including Charleston, Columbia, and Fayetteville, NC.

She criticized the fact that President Bush did not call or visit her to offer condolences while visiting South Carolina for a fundraising event shortly after her son’s death.  When the president met with grieving parents at Fort Carson later that November, he recognized Elaine.  “He said, ‘I believe I know who you are,’ ” Johnson recounts.

Speaking to Darius’s sister, Latrese Jennings, one senses that Darius had inherited his mother’s fiesty personality.  Latrese, now a junior at Allen University in Columbia, says she and her brother often fought over the chores assigned to them by their mom.

“Yeah, we used to get into it a lot when we were kids.  We would fight over who would wash the dishes or vacuum the carpet,” she says.

The largest source of conflict among Elaine Johnson’s kids involved the phone line.  “When boys started to call the house and ask for me, Darius would get on the line and try to embarrass me.”  After listening to every word of her conversations, Latrese remembers, Darius would tease her unrelentingly.

The last time Latrese Johnson spoke with her brother was on October 29, 2003.  He called home to wish his sister a happy birthday.  “He seemed really tired,” she remembers.  “He wished me a happy birthday, and then he wanted to speak to his mother.”

Darius Jennings was a momma’s boy.  Elaine Johnson likes to talk about how he used to give her flowers often, even as a little boy.  “He’d go out in the yard and get a handful of dandelions and things, you know, weeds, and he’d bring them in to me.”

She likes to talk about cooking for her son and the friends he had made on the base at Fort Carson.  Sometimes Darius and his friends would get together enough money to pay for her plane ticket just so she would go out to Colorado to cook for them.  “His friends there would call me ‘Momma J,’ “ Elaine Johnson remembers with a smile.  Two of those friends came to South Carolina for Darius’s memorial service.

According to Elaine Johnson, the soldiers who served with Darius came to see him as a good luck charm.  She tells about the time Darius instructed the driver of the humvee he was in to turn to the right, for no apparent reason.

“The driver asked him, ‘why do you want to turn right?’ and Darius said, ‘just turn,’” Johnson recounts.  “So he turned, and the car behind them went straignt and hit a mine.  They told me Darius could just sense danger.”

Another time, Darius and his unit were patrolling the streets of Fallujah when they were approached by two children.  According to Johnson, it was not uncommon for children to approach soldiers in search of the crayons or candy that were distributed occasionally.  But something about these kids triggered Darius’s intuition.  Johnson says, “He yelled at those kids to back away and then he made them roll on the ground.”

One of the children was blown to pieces in front of the soldiers as the bomb he was carrying beneath his clothing went off.  “They called Darius their archangel,” she says.

Walking out to her car with Alshaun in her arms, Elaine points to the Winn-Dixie supermarket across the street.  “That was the last job he had before he joined the army,” she says.  She tells us that his co-workers were surprised that he had enlisted, since Darius was such a “ladies’ man” and a “momma’s boy.”

Elaine goes to her car and places her godson in his booster seat.  She returns holding the framed picture of her son that she carries with her everywhere.

“He is my angel,” she says.  Back in the car, Alshaun has somehow managed to climb out of his booster seat.  Noticing this, Elaine says she needs to get going.  It’s dark, and the baby needs to eat and get ready for bed.