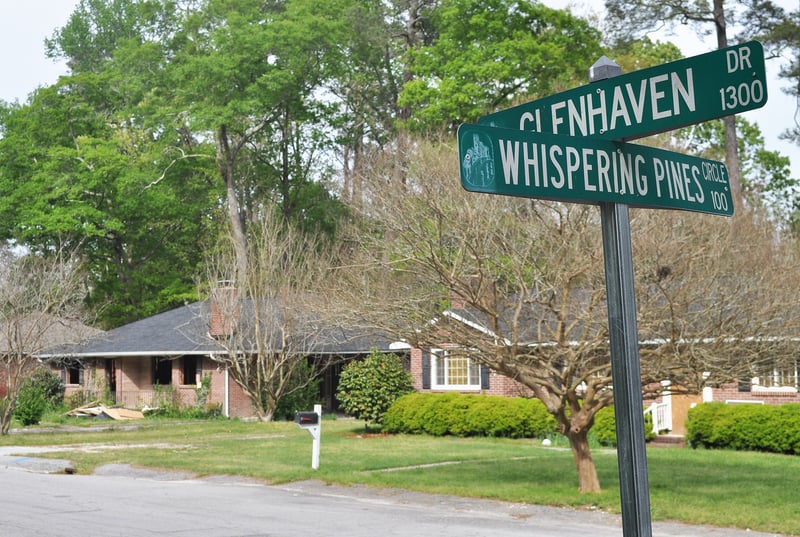 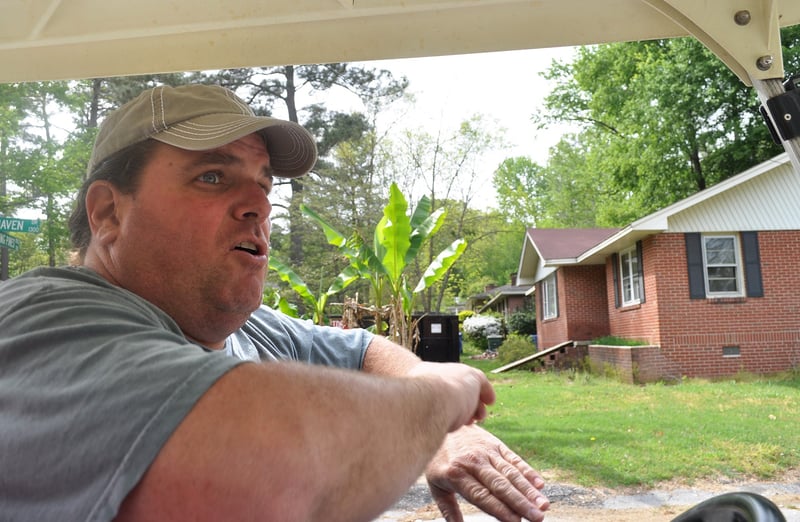 Eric Buff, a Gills Creek resident, explains how properties on the bottom of the hill were totally submerged. Buff said that certain roads looked like white water rapids the first night of the flood. Photo courtesy of Colin Demarest. 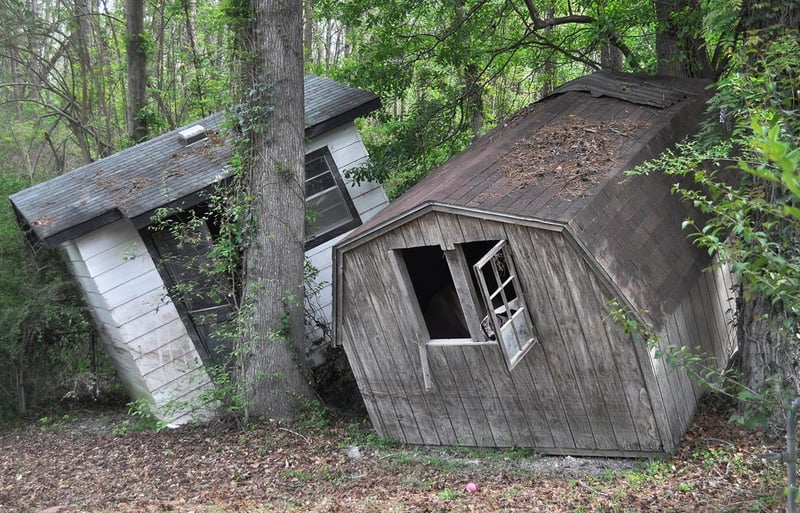 The flood currents were so strong, according to Buff, that the white shed was lifted off its original foundation and landed on a neighbor’s chainlink fence – approximately 50 feet away. Photo courtesy of Colin Demarest. 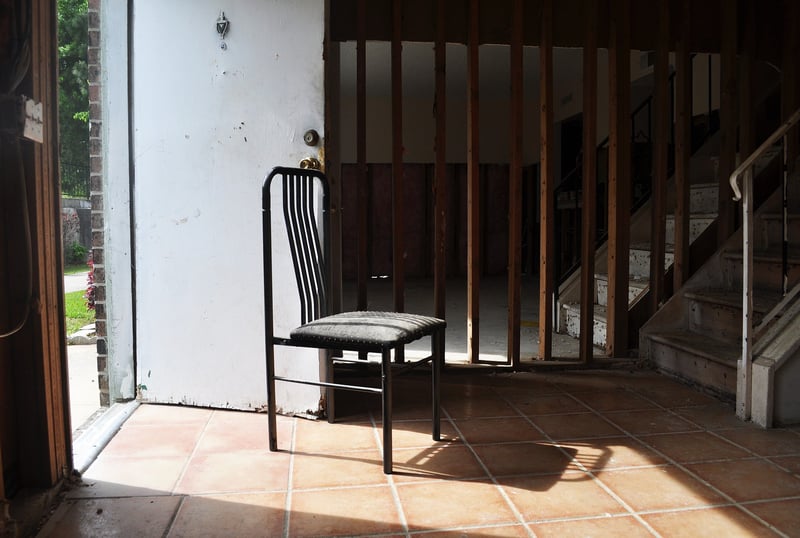 Although some efforts have been made to fix the houses and apartments around Gills Creek, most remain stripped and boarded up. Rebuilding means red tape and permit issues, which slows down the process, according to Buff. Photo courtesy of Colin Demarest.

Homes on Timberlane Drive that are bank owned have gone largely untouched. Restoration without bank permission is illegal, leaving the houses to mold, rot, and subject to vandalism. Photo courtesy of Colin Demarest.

In the early morning of Oct. 4, 2015 as a relentless, steady rain fell outside, Eric Buff received a telephone call from his older sister.

Diana Woodward told him floodwaters had inundated her yard and were pouring into her garage on Columbia’s Timberlane Drive, a neighborhood of mostly ranch style houses near Gills Creek. He got a second call at 7 a.m.: Water was up to her knees. By that time, Buff was pumping water out of his basement on nearby Whispering Pines Circle.

Soon, his street was engulfed in 10 feet of water, but his home was undamaged. He opened his home to his neighbors and sister who escaped with nothing but the clothes on their back. They watched their houses go under water in the worst flooding disaster the city of Columbia has ever witnessed.

The morning after the flood, Buff lent a hand to a neighbor. He realized that everything in their house – furniture, appliances, clothing - had to go, but they had the opportunity of saving the hardwood floors.

“From that moment on, my life was consumed in gutting homes,” he said.

Six months later, Buff worries that the future of the Gills Creek-area neighborhood is dim. Houses sit vacant and mold inside continues to creep. In a race against mold and rot, city and county officials say they are hard at work collecting necessary funds for the homes damaged by the floodwater.

The tragic disaster left many without water, power and a home. There were 19 weather-related fatalities in South Carolina. In the wake of the flood, 2,324 households in Richland County received temporary housing assistance, because the water damage was significant enough that they had to leave their homes.

Buff, who sells merchandise at USC football games, and other volunteers gutted 17 homes in the neighborhood in 10 days. Buff said he did not leave the neighborhood for nine days because he was working so hard.

His main goal was to get everything out of the houses and board up windows and door to keep the house from molding. This was the best way to salvage the house to either be repaired or bought out, he said.

Buff, who continues volunteering through the St. Bernard Project, remains frustrated because some of the residents did not obtain proper permits and had to stop the work they were doing. Some left shortly after, never completing the process they started, and Buff said this makes the neighborhood look worse.

In order to rebuild, FEMA, the Federal Emergency Management Agency, requires each house in the flood zone to be lifted two feet above the 100-year floodplain. The floodplain level is different for every area.

Raising a home could cost anywhere from $15-$18 per square foot, said Earl McLeod, executive director of the Building Industry Association of Central South Carolina. That figure could be beyond the budgets of many residents of Timberlane Drive and surrounding streets. Buff believes his neighbors do not have the necessary means to meet these requirements.

FEMA gives an extra $30,000 to those who had flood insurance to raise their home and have committed to rebuilding.

Without rebuilding, the houses must be bought out, and Buff said that doesn’t seem promising.  “(I have) no trust in what they say about a buyout,” Buff said.  “I don’t think they’re going to do it.”

Ali Khan, city floodplain manager, said the city and county are collecting data to determine which houses they can purchase and which homeowners are looking for a buyout.

The city and county are expecting to receive federal hazard mitigation money that will be used to perform these buyouts. The deadline for applying is this October.

Khan said that people should start seeing progress within the next few months.

Andrea Bolling, Richland County floodplain manager, said the county is pursuing all available federal funding opportunities and is hopeful the county will be awarded grant funding in order to continue with the recovery process.

The state estimates the total funding it will receive under the Hazard Mitigation Grant Program is $36 million, with $9 million currently projected for housing acquisition projects.  Richland County is developing grant applications in order to pursue the HMGP funding.

The Hazard Mitigation Grant Program helps communities, which have been declared by the president as a major disaster. Hazard mitigation is the “actions taken to eliminate long term risks to people and property from natural hazards,” according to FEMA.

Looking forward, Buff only sees property values plummeting and a neighborhood in decline.

The S.C. Emergency Management Division is aware “the recovery process is not over and voluntary agencies and case managers remain active in the state today,” the agency said in a statement.  Bolling said the likely scenario for homes damaged in the flood like Timberlane Drive, that are so close to the creek, is purchase and demolition. This is to help reduced future risk, she said.

Buff still worries that the city and county may not receive the necessary funding to complete this project, leaving the homes sitting vacant.

“Time will tell, but I don’t feel so confident that it will happen,” Buff said.