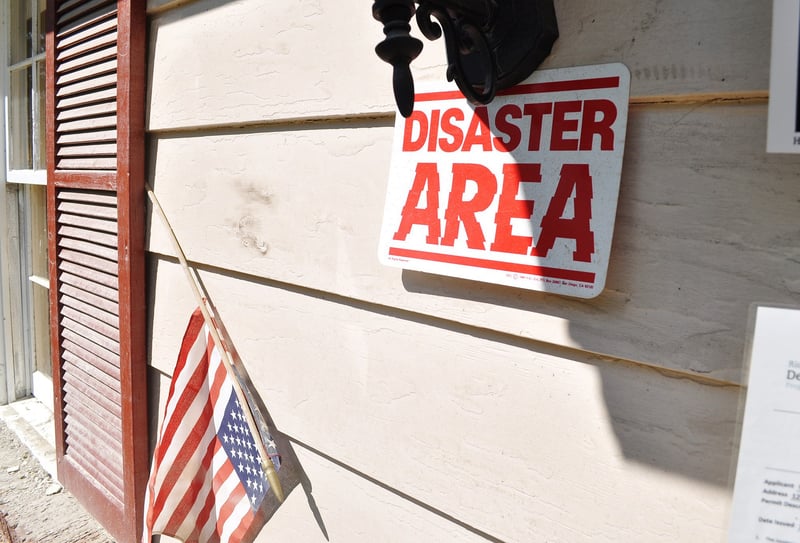 Six months after: relief and recovery 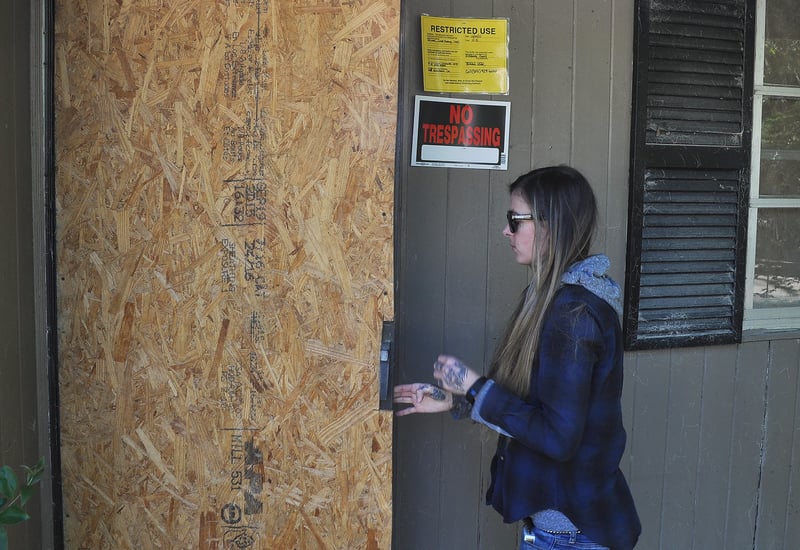 Rachel Larratt, a resident of Gills Creek, enters one of the many homes destroyed by the flood. Although most houses are now stripped and boarded up, some of doors remain open – this door locks by putting a cinderblock in front of it. 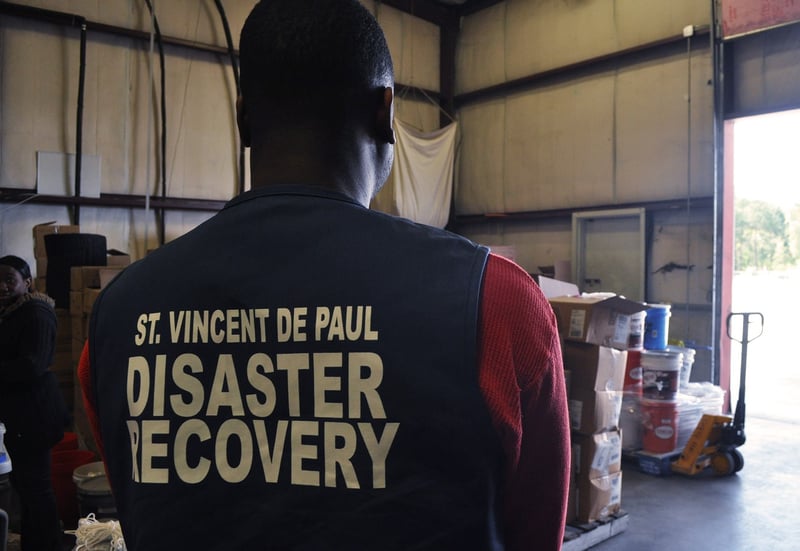 Tim James, one of the warehouse workers, takes a short break between organizing flood supplies. The foundation's warehouse off of Shop Road has served approximately 400 families and continues to do so. 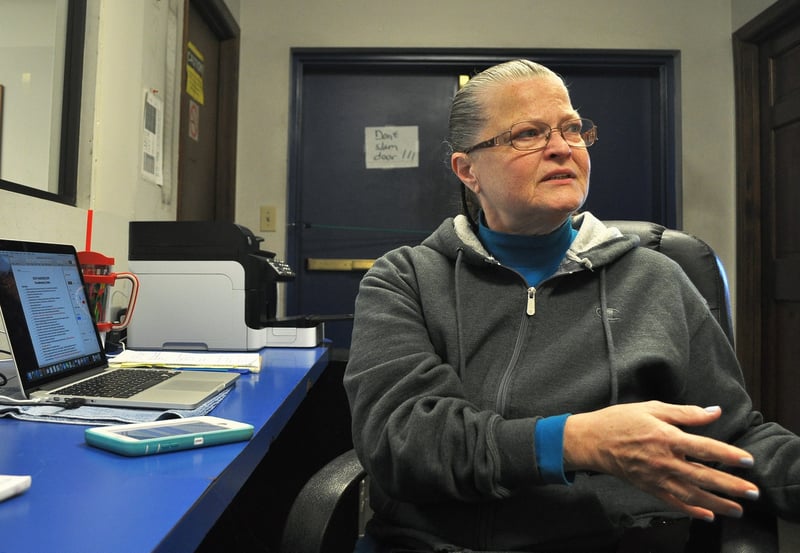 Rita Shipman started off as a volunteer in Gills Creek and ended up working long term at the warehouse. "We will be here as long as we can be here to help them," Shipman said.

By Cecilia Brown and Colin Demarest

Walking the streets near Gills Creek, you won’t see many kids playing on swing sets or hear families laughing in backyards. Instead, the Columbia neighborhood is littered with vacant houses and debris six months after a mighty flood ravaged South Carolina.

“I think depending on what your experience was during the flood, you might not just want to move back in here anyway,” said Rachel Larratt, executive administrator of the South Beltline-Gills Creek Community Relief Foundation.

Since those early flood-ravaged days, Larratt has been lending a helping hand to those who escaped rushing waters in the early hours of Oct. 4, 2015. The foundation has helped nearly 1,600 in the Midlands alone.

Larratt owns BME.com, a body modification related website. She has had to step away from her responsibilities there to focus on Gills Creek recovery.

“I am lucky that my staff has all been with me for 10 to 15 plus years so they’re able to run things while I take a break to do this,” Larratt said.

A weekend of heavy rains, spawned by Hurricane Joaquin, and the collapse of 36 dams across the state sent a swirling wall of water and debris through Columbia and neighboring Richland County, the bulls-eye of the storm that devastated South Carolina from the Midlands to the Lowcountry. Nineteen people died in South Carolina as a result of the storm.

Larratt remembers the S.C. Department of Natural Resources coming  through the Gills Creek neighborhoods by boat to check homes for bodies following the flood.

“That X just means the house was cleared. Luckily nobody died here,” Larratt said last week as she showed visitors the abandoned homes and the large letters still prominent on them.

There was speculation about whether or not higher structures and stilted homes would have prevented some of the destruction. Larratt, though, sees no point in pondering what might have been.

“If the whole point is to mitigate future hazards and loss, it just doesn’t make sense for these houses to even be here,” Larratt said.

The road to recovery remains long for this neighborhood. Gills Creek had more than 1,500 volunteers during the first three weeks after the flood.

“We definitely could not have done it without volunteers,” said Larratt of the community outreach.

Rita Shipman joined her congregation, part of the Church of Jesus Christ of Latterday Saints, for several hours one Saturday assisting the Gills Creek area.

“We believe in service. That’s one of the big things about Mormons, we believe in helping people,” Shipman said.

Shipman now works with Larratt every day, helping at the foundation warehouse on Shop Road and verifying that recipients have proper paperwork from the Federal Emergency Management Agency, the federal agency that provides immediate disaster support.

The foundation started out in tent cities and then moved into the warehouse as more donations poured in.

“Rachel and Rita are both superheroes, it would be impossible for me to describe what all they’ve done to try and help people,” said Sabrina Todd, whose split-level home on Glenhaven Road had upwards of 7 feet of water in it at the height of the flood. The foundation provided Todd and her husband with a mattress and other household supplies to get them back on their feet.

“I’ve been to the warehouse… and I was there in the neighborhood when they were running the foundation out of tents using space heaters to stay warm,” Todd said.

“The people that would come by, this was their only hope for getting what they needed – you know what they really needed today. I’ve seen people crying because they got new towels,” Todd said.

Larratt continues to request donations from businesses for the foundation to keep up with the needs of flood victims.

“Rachel’s excellent about getting stuff from manufacturers. She’ll call a manufacturer and say ‘Can you send us some shampoo.’ Well, we got a whole palette of about 500 bottles of shampoo for our customers,” Shipman said.

Approximately 400 families have registered with the foundation. Registering with the South Beltline-Gills Creek Community Relief Foundation is simple, according to Todd. Larratt agrees.

“If you were flooded, you come and register with us,” said Larratt. “You just have to register one time and you can come as often as you’d like.”

If you have filed for FEMA paperwork and want to seek flood relief from the South Beltline-Gills Creek Community Relief Foundation check out more information at their website, FEMA's website or call (803) 381-0790.

The South Beltline-Gills Creek Community Relief Foundation is one of many non-profits that will benefit from Midlands Gives, a 24-hour online giving benefit sponsored by the Central Carolina Community Foundation. It will take place on May 3.