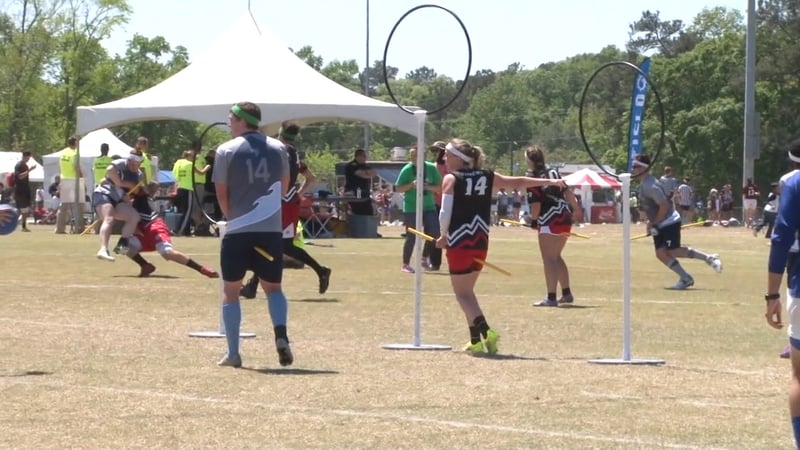 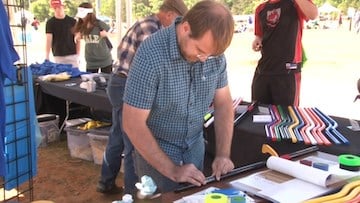 Kevin Peterson works on PVC broomsticks to sell to fans during the US Quidditch Cup. 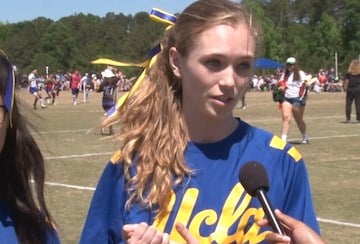 Lauren Fitzgivvon from UCLA Quidditch says being treated as an equal on the field makes her a better athlete. 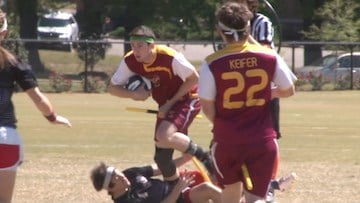 Quidditch is an intense game resulting in injuries like concussions and abrasions.

Quidditch is a sport based on the Harry Potter series played on flying broomsticks. In the books and movies, players of the game would fly after balls, called bludgers and quaffles, while looking for a small ball called a snitch that would give the player who catches it 20 points and end the game.

Fans of Harry Potter attempt this magical game but because they are Muggles, (that’s what the series calls non-magical people), they cannot fly so the game had to be altered to play on the ground.

A few years ago the game was played by super fans who wore capes and goggles while running with a broomstick between their legs just for fun. Now the game has evolved into a serious contact sport.

The top 60 Quidditch teams from across the nation competed for the US Quidditch Cup Championship in Columbia this last weekend. This game is getting more competitive and people are getting hurt.

Shawn Zink is the Quidditch athletic training coordinator. He said three years ago there were 17 disqualified concussions in a tournament. Rules had to be improved to accommodate the safety of the players.

“Concussions have been a big problem in the past couple years so they have taken certain things away,” Zink says. “You can’t hit anyone out who doesn’t have the ball…and they have developed and are utilizing tacking technique, which is a way to get the athletic down in a safe manner.”

This serious contact sport is also co-ed. UCLA player Lauren Fitzgivvon says that being treated as an equal makes her a better athlete.

“I love the fact that if a male is going to try and take me down they are not going to care about my gender and I love it,” said Fitzgivvon.

Not only has the rules evolved but so has the equipment. The uniforms are now cape-less and this is the first year that PVC pipes are used instead of traditional broomsticks with bristles.

All of the PVC pipes for the US Quidditch Cup were made by founder of Peterson Broomsticks. Kevin Peterson says he has made over a thousand PVC pipes to be used as broomsticks.

These updated broomsticks are less expensive than the ones used in the past. Peterson said that a broomstick with bristles for games a few years back would cost around $60 each, but his sportier broomstick can cost less than $30.

Trey Pressely, a Quidditch player from Boone, North Carolina says he prefers the PVC pipe over the traditional broomstick.

“These are just way lighter and less likely to shatter on contact,” Pressely said. "Cause that was a problem that was happening is people going for a tackle, brooms would shatter and people would be getting splinters and stuff."

Eliminating the broomstick and cape along with the new regulations to control safety makes the game of Quidditch visually similar to a soccer or lacrosse game.

With bits of magic slowly being picked out of the game, it has transitioned from its original form and some players think that is a good thing.

“ I’m a huge fan of that transition,” said Eric Morlock, member of the Virginia Quidditch Club. “I think the sport is great in its own right. I don’t think it needs to be connected to Harry Potter. I think we lose a lot of people who are athletic and want to get involved in a really unique sport because they think it is a Harry Potter fan club or something like that.”

There were some reminders of the Harry Potter series in the crowd. A couple of fans wore capes here and a little boy holding a toy wand while wearing round framed glasses there, but the overall affect of the US Quidditch Cup was more intense than 10 years ago and the stereotypes of Quidditch is getting shoved aside.