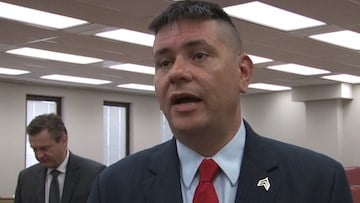 Sgt. Jonathan Lubecky suffers from PTSD and has used marijuana as a way to alleviate his symptoms. 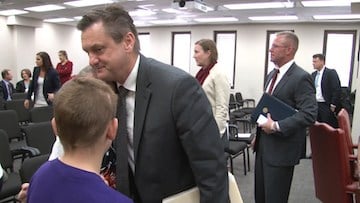 Sen. Tom Davis hugs a mom of a patient who suffers from a brain condition that medical marijuana alleviates.

A bill to legalize medical marijuana use in South Carolina was voted down in a Senate medical committee meeting despite pleas from a co-sponsor of the bill, Sen. Thomas Davis, R-Beaufort.

"Why in the world are we standing in the way of letting those patients get the relief they need?" said Davis.

The bill was crafted to be "the most conservative medical marijuana bill out there," according to Davis. Unfortunately for Davis, it was not conservative enough for other committee members. The only other senator that voted in favor of the bill was the other co-sponsor, Sen. Brad Hutto, D-Orangeburg.

Proponents of medical marijuana have said it can help people suffering from a variety of health problems, including post-traumatic stress disorder, anxiety, chemotherapy, glaucoma, H.I.V., and fibromyalgia. Retired Sgt. Jonathan Lubecky suffers from PTSD and said he gets relief from smoking marijuana.

"I've had a few suicide attempts and marijuana has helped me with getting those thoughts out of my head," said Lubecky.

Davis noted that 35 states have legalized some sort of medical marijuana use, but South Carolina does not seem to be next in line.

Sen. Mike Fair, R-Greenville, was one of nine senators to vote against the bill in the medical committee, citing law enforcement and SLED Chief Mark Keel as the main reason for his concern.

"Medical marijuana though, Chief Keel says and I believe this, is a pathway to recreational," said Fair.

Fair does not see a future for the bill anytime soon and believes most South Carolina senators agree with him.