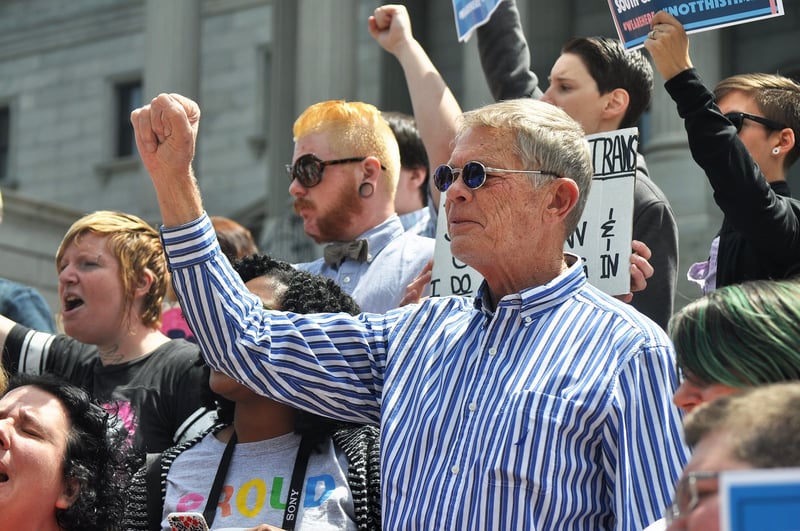 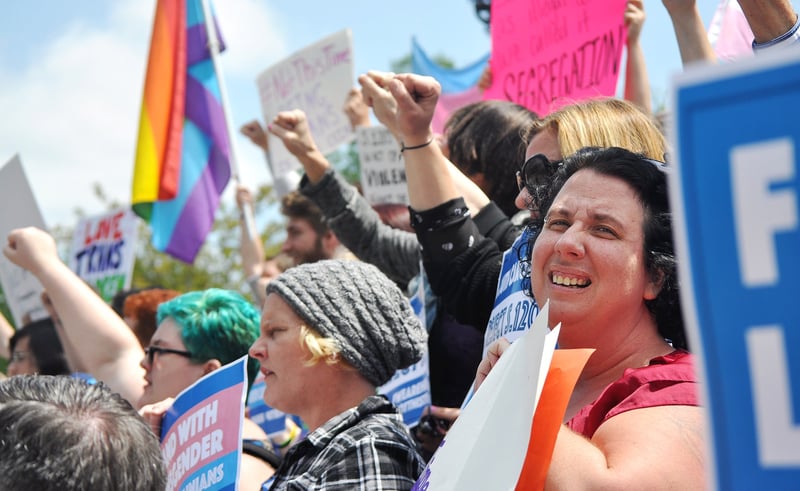 Danielle Collins was among the protestors to ensure her daughter doesn't have to endure what she did when she was younger. “There were no adults in an open support role when I was a youth,” Collins said. 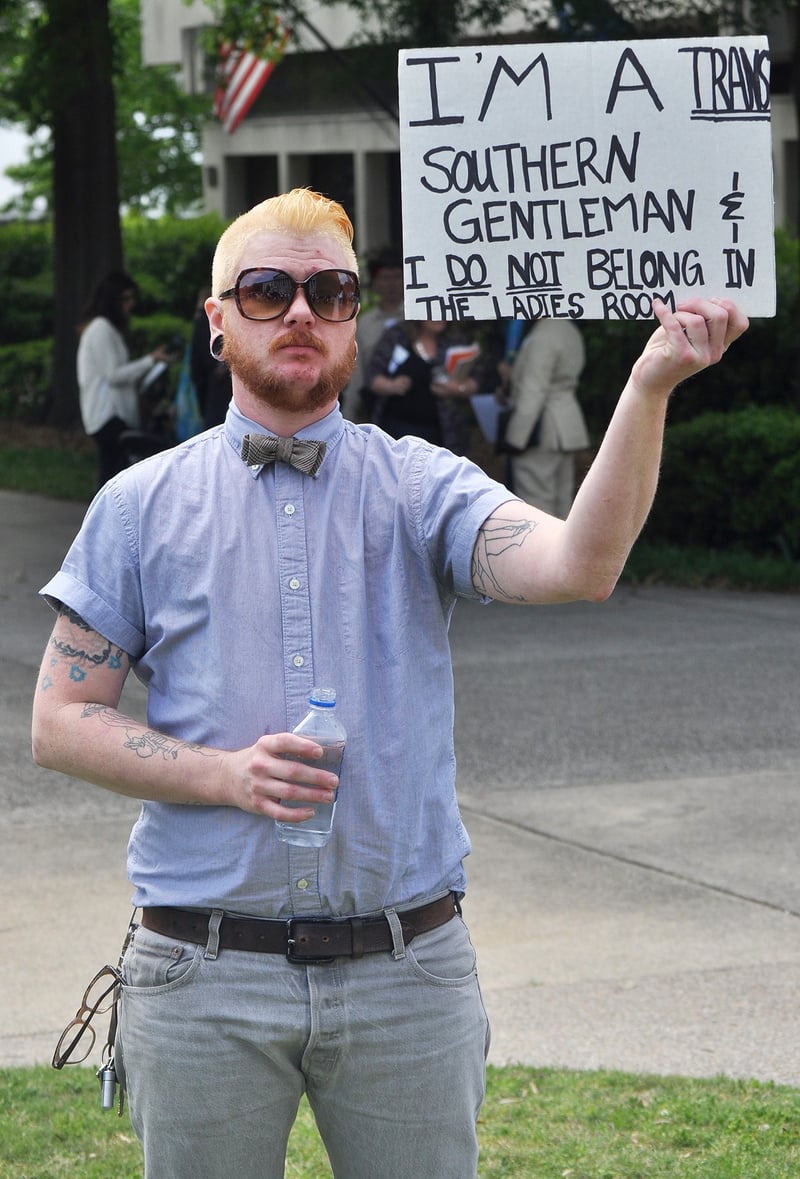 Carter Girlardo, 36, said he was there “representing Charleston.” Multiple oganizations from across South Carolina were in attendance to show support of the protest. 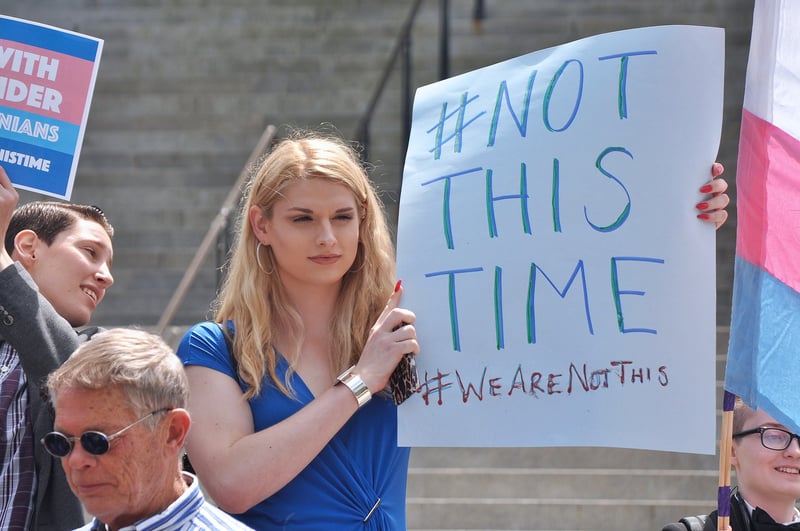 Capri Culpepper, formerly Chase Culpepper, was with the protestors and spoke on the State House steps during the rally. “I’m here just to have a voice,” she said. “Trans people have existed since the beginning of time.”

Dorothy Collins, a member of the LGBT community, recalled how difficult coping with her feelings was when she was younger. Now 41, Collins is outraged with South Carolina’s looming transgender bathroom bill. She, alongside her gender fluid daughter, made sure their voices were heard.

“The time is now. It’s time for change,” Collins said. “Having to blend in shouldn’t be the goal.”

Sayali, Collins’ 13-year-old daughter, denounced the bill and said “people should just mind their own business.”

The Senate bill, introduced April 6, is “almost identical to the North Carolina bill,” according to Sen. Lee Bright, R-Spartanburg, the main sponsor of the legislation.

Georgia Gov. Nathan Deal vetoed a similar “religious freedom” measure that would have curtailed the rights of the LGBT community by allowing faith-based organizations to deny services to gay, lesbian, bisexual, and transgender people.

North Carolina Gov. Pat McCrory has already had to dial back the legislation in his state after corporations spoke out against the measure and threatened to abandon economic development projects.

Capri Culpepper, the transgender teen who sued the SC Department of Motor Vehicles and won the right to wear makeup in her driver’s license photo, attributes the recent outcropping of “bathroom bills” to growing transgender awareness.

“The increased visibility of trans people has given rise to the hate legislation,” she said. “Legislating hate is wrong and this bill is clearly discriminatory.”

Senate bill 1203 restricts a person to using a publically accessible bathroom, locker room, changing room, or shower room based on their “biological sex” – male or female, as stated on someone’s birth certificate. Private businesses, though, can do as they like, according to Bright.

Many opponents of the bill claim this restriction would prove disastrous.

Ryan Siegmann, 23, arrived at the protest with a sign that read, “Genital Checks Slowdown Bathroom Lines.” Although lighthearted, Siegmann said that the measure would jeopardize the safety of transgender youth. Siegmann also attributed the bill’s creation to voter appeasement.

“There’s a lot of people not with the change, and this is the way of putting things back,” Henry-Rivera said. “The Bible Belt has a lot to do with it.”

Sen. Bright said the bill was created to promote safety, not to discourage it.

“When a woman goes to the restroom, in this multiple stall, we want her to be, to feel safe and realize that it’s other women in that restroom,” Bright said.

The bill, co-sponsored by Sens. Larry Martin, R-Pickens, and Martin Fair, R-Greenville, also states that local school boards would have to require students to abide by the same law.

Protestors – many of whom were middle and high school aged – argued that this clause would single them out for ridicule or bullying.

A 2012 Gallup Poll ranked South Carolina 38th in the nation in LGBT population. Approximately 2.9 percent of the 3370 interviewed said they identified personally as lesbian, gay, bisexual, or transgender. However, getting an accurate measure of sexual orientation and identity is difficult. Social climates, pressures, and stigmas all influence these numbers.

The chances of the transgender bathroom bill passing are slim though, according to protestors and LGBT advocates.

Attorney Malissa Burnette – who works with the SC Equality Coalition – spoke to the crowd on the southern steps, assuring protestors that the bill wouldn’t go through. She attributes the lack of momentum to a “pitiful turnout of supporters” at the committee meeting.

Madi Hrin, who identifies as nonbinary – an umbrella term for those who do not identify with male/female designations – says that although the bill will not pass, “it’s still necessary to protest.”