Manhunt for the suspects that attacked Brussels transportation c - DatelineCarolina 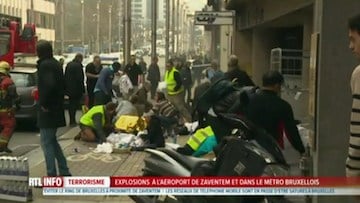 Manhunt for the suspects that attacked Brussels transportation centers 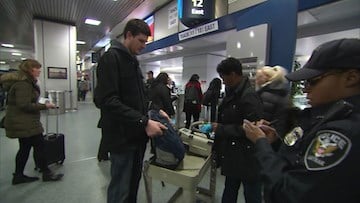 American cities have increased security after the attacks in Belgium. 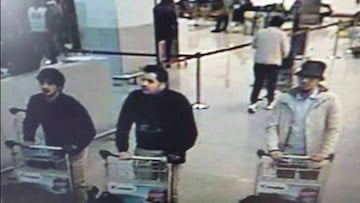 Authorities are looking for the unidentified man on the right. 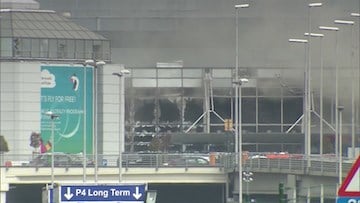 Two additional bombs were deactivated by the police in controlled explosions.

Belgian police are searching for more terrorists in connection with the Brussels bombings on Tuesday morning. Three explosions ripped through Brussels killing  least 31 and injuring 270 other people.

Two of the explosions were at the Zaventem airport in the ticketing lobby. Ten people were killed and more than 100 wounded by two bomb blasts there. The third explosion rocked the Maelbeek metro station near the city's center where at least 20 people died and over 130 were wounded.

Belgium's federal prosecutor has identified two brothers Khalid el-Bakraoui, 27, and Ibrahim el-Bakraoui, 30 as two suicide bombers in the blasts. Ibrahim el Kakraoui was killed in the bombing at the airport, and Khalid el Bakraoui was killed in the bombing at the metro. Police are looking for the one man seen in security camera video with the two brothers and they are trying to identify a third bomber who died in an airport explosion.

Police raided a house in the Brussels neighborhood of Schaerbeek rented by one of the el Bakraoui brothers. They discovered explosives, chemical products, nails, and an Islamic State flag. Authorities believe there is a link between this attack and the attacks in Paris.

Two unexploded bombs were found by the police at the airport and destroyed in a controlled explosion.

Belgium's terror alert was raised to it's maximum level after the explosions.

"What we feared has happened," said Belgian Prime Minister Charles Michel. Michel urged his nation to "be calm and show solidarity."

President Obama was in Havana Cuba during the attack.

"It is another reminder that the world must unite. We must be together regardless of nationality, race, or faith we are fighting against the scourge of terrorism," said Obama.

ISIS has claimed responsibility for the attacks.

American cities have stepped up security in their transportation hubs to protect them from possible attacks. Hundreds of flights  to and from Belgium have been canceled.