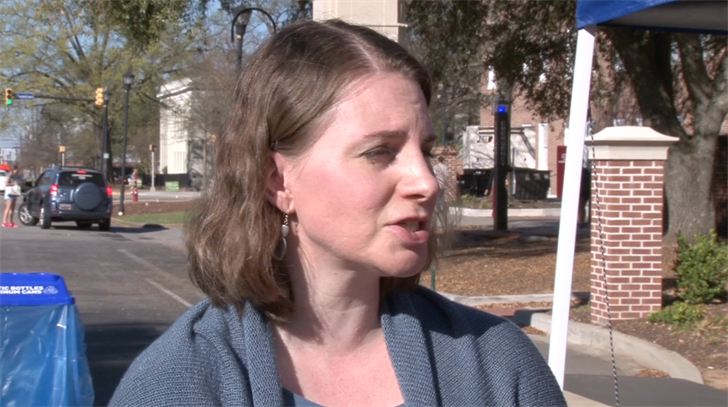 Margerie Duffie, spokeswoman for health services, said USC is making an effort to spread the word about sexual violence across the USC campus.

Green street on the USC campus was buzzing Tuesday morning during the weekly Farmers Market. One tent stood out from the rest with an important message.

Sexual Assault Awareness Month is just around the corner, and USC's Student Health Services tent was setup to get its message across: awareness is the first step to prevention.

Students were able to decorate five different colored shirts, each symbolizing something different, like survivors and victims of assault.

One student chose to decorate a shirt for personal reasons.

"Many men, even some of my own friends, have had issues and they have also been abused," said Faris Al Mahoobi. "It's not only the case of one side's gender view but male and female."

Other students were also concerned about sexual assault across the USC campus.

"I definitely don't go to places by myself," said a female student. "I don't walk very far by myself on campus at night because you don't know what is going to happen. Yeah, I don't see it on campus as much but more downtown."

The National Center for Victims of Crime says that one out of five women are likely to be sexually assaulted in her lifetime. The group says one in every four women on college campuses are assaulted, making the issue more prevalent.

Over the past two years, USC's Sexual Assault and Violence Intervention and Prevention Office says that over a hundred assault cases have been reported.

USC is making an effort to get the word out there, according to Margerie Duffie, the Spokeswoman for Health Services.

"Sexual assault is such a national conversation because it is such an issue on campuses across the nation," Duffie said. "Our campus is very proactive and we do a lot of prevention efforts."

The t-shirts will be on display April 18 on Greene Street from 10 a.m. to 2 p.m. They will then be displayed on the second floor of Russell House from April 18 to April 22.

If you wish to speak to someone in the Sexual Assault and Violence Intervention and Prevention Office, call 803-777-8248.