Mother of Trayvon Martin, Sybrina Fulton, spoke in support of presidential candidate Hillary Clinton. The death of Fulton’s son sparked the Black Lives Movement in the country, and now she is using her platform to endorse Clinton. 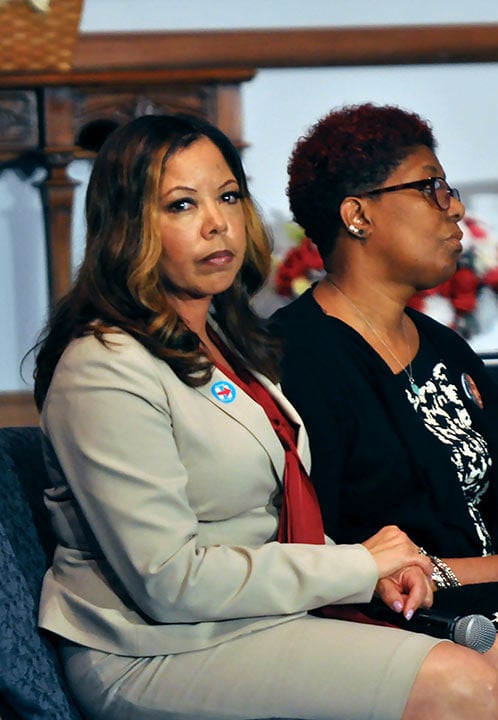 Lucia McBath sat on stage at Central Baptist Church in support of Hillary Clinton. A part of “Mothers of the Movement,” her son, Jordan Davis, was shot and killed in Jacksonville, Fla., eight months after Trayvon Martin was killed by George Zimmerman. 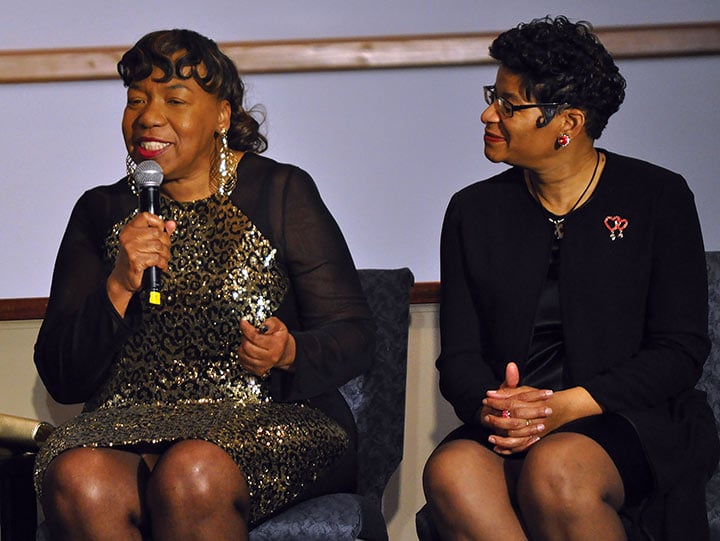 Gwen Carr, left, and Geneva Reed-Veal spoke on behalf of their children Eric Garner and Sandra Bland. Carr and Bland stressed to audience members to vote for Clinton in the upcoming South Carolina Democratic primary. 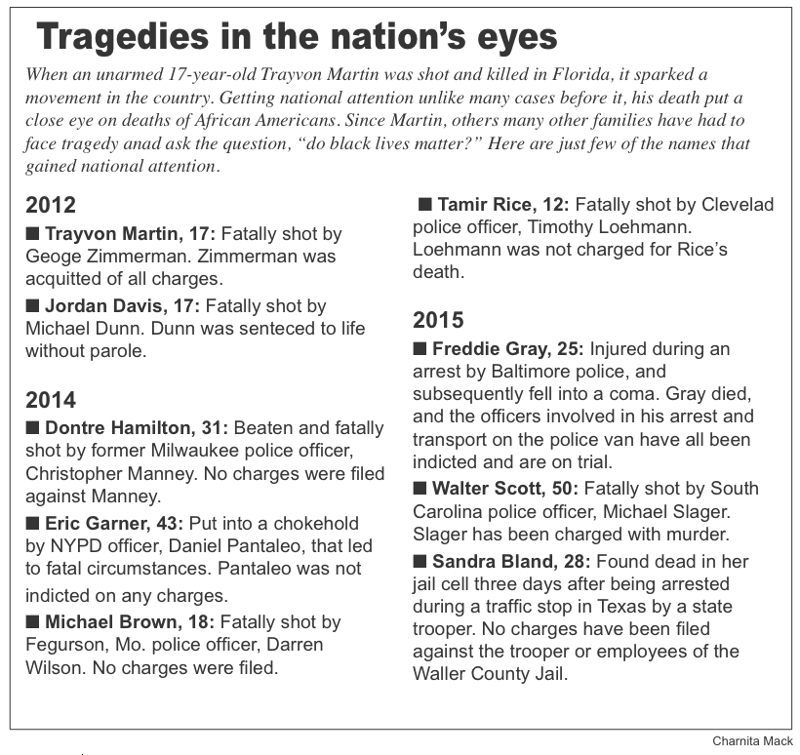 Four years ago, the mother of Trayvon Martin never imagined herself sitting on a stage with Democratic presidential candidate Hillary Clinton, much less endorsing her presidential bid publicly.

But that was before Sybrina Fulton found out that her 17-year-old son had been shot to death by a neighborhood watch volunteer suspicious of the teenager as he walked to his father’s home from a convenience store.

On Wednesday, Fulton took the stage in the sanctuary of Columbia’s Central Baptist Church next to Hillary Clinton, former Arizona Rep. Gabrielle Giffords, D-Ariz., and other mothers who have lost their children to police or gun violence. They spoke in support of Clinton at one of the Clinton campaign’s  “Breaking Down Barriers” forum.

“I was never into politics, but now I am, and one of the reasons is because of her,” Fulton said.

She and the other mothers – and the details of their sons’ deaths at the hands of police – have proven catalysts for the “Black Lives Matter” movement.

Four years ago, Fulton couldn’t have known that a presidential candidate would be sitting with her talking about the gun violence against black males in the country. Fulton didn’t know that she, along with the other mothers at the forum, would come together as the “Mothers of the Movement” because of tragedy and support Clinton.

Today, that is her reality.

Fulton used her time at the forum to tell her son’s story and recall her first meeting with Clinton, then secretary of state.

“When no other candidate would listen to us, Mrs. Clinton did,” she said, something that all of the mothers agreed on.

This wasn’t Fulton’s first time speaking out on Clinton’s behalf. In November 2015, she spoke with CNN in support of Clinton, and she also wrote an open letter in January explaining her support.

Lucia McBath, whose son, Jordan Davis, was shot outside a Florida convenience store for playing rap music too loudly, also attended the forum, along with the mothers of Eric Garner, who died in New York when he was put in a police chokehold, and Dontre Hamilton,  a diagnosed schizophrenic shot by a Milwaukee police officer.

Davis’, Michael Dunn, killer was sentenced to life in prison without parole. Garner’s family received a multi-million dollar settlement from the city of New York. No charges were filed in the Hamilton case, but the officer was fired.

Geneva Reed-Veal, mother of Sandra Bland, the young woman who was found hanged in a jail cell in Texas, was also present and made it clear the mothers were not being paid to attend.

“There is no exploitation, there are no payments being made, there aren’t any secret emails,” she said.

Martin’s death occurred during the 2012 presidential year, and now four years later, there is a national conversation about police brutality and race that resonates in the 2016 election season.

Fulton made it clear Tuesday that it’s important to remember the circumstances behind Martin’s death, as the fourth anniversary of his death approaches.

Martin had just left a store in Sanford, Florida after buying a package of Skittles candy and an iced tea. While walking back to his father’s house and on the phone with a female friend, Martin noticed he was being followed by George Zimmerman. Zimmerman was on the neighborhood watch at the time and felt that the 17-year-old looked suspicious. After following him for a while, and then getting into an altercation, Zimmerman shoots and kills Martin.

March 23, 2012 – President Obama was asked to comment on Martin’s case during remarks on the nomination of Dr. Jim Kim for World Bank president.

Alicia Garza, Patrisse Cullors and Opal Tometi came together to create the movement Black Lives Matter as a response to Martin’s death.

“#BlackLivesMatter is a call to action and a response to the virulent anti-Black racism that permeates our society,” according to their website.

The jury in the Zimmerman trial was made up of six women. None of them were black.

In the end, the jury of women decided that Zimmerman was not guilty of second-degree murder and also of the lesser charge, manslaughter.

Deaths of young black men and women become more prevalent in national news, and Fulton finds herself part of a movement.

Nov. 2, 2015 ­ – Clinton meets privately with Fulton, McBath and other mothers in Chicago.

Feb. 23, 2016 – Fulton speaks in South Carolina in support of Hillary Clinton – three days before the anniversary of her son’s death and four days before the Democratic primary in the state.