Campaign volunteers are knocking on doors and passing out literature to inform voters about their candidate. 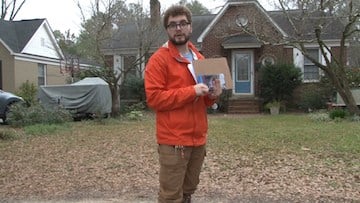 Sander's campaign volunteers are making sure he has a shot to beat Hillary Clinton.

Bernie Sanders volunteers in Columbia are knocking on a lot of doors to make sure he has a shot against Democratic front runner Hillary Clinton on February 27.

"We are organizing a lot of ground troops to get out there and canvas. That is the most effective method for any campaign to close the gap" said Sander's campaign volunteer Patrick McKenny.

Canvasing for campaigns means knocking on doors and talking to voters to inform them about the issues and give them information about a their candidate.

West Virginia resident Sam Hawkins has followed the Sanders campaign through the first primaries. Hawkins has been helping the campaign canvas neighborhoods in Iowa, Wisconsin and South Carolina.

"Canvasing is the most effective way any volunteer can spend their time because people that are canvased and say yes are more likely to actually go out and vote in the polls" says Hawkins.

Hawkins believes there is one major reason campaigns go out and canvas, that is to make a personal connection with people and to be able to have a conversation about issues.

Volunteers for the Sanders campaign say they will be out canvasing and talking about the issues every day until the Democratic primary to try and secure more votes.

"You got to talk to as many people as you can. Spread the word" says Hawkins.

"I'm going to give him everything I've got" says McKenny.

A win in South Carolina could give either candidate a boost as they head into super Tuesday.