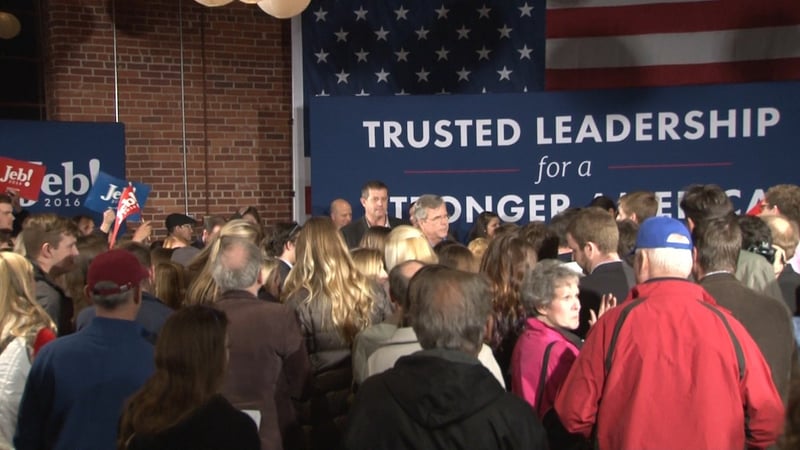 Bush took the time after the rally to take selfies with anyone in the crowd who wanted one.

One of Bush's campaign advisers, Linda Willard, talked about his strength with the military.

Brianna Wood is a student and campaign volunteer who feels passionate about Bush's policies.

A large crowd gathered in downtown Columbia Thursday night to hear what Bush had to offer them. Bush focused his conversation on the military.

"Yes, I will be a Commander in Chief that respects the military and yes, I will rebuild the military so it is the strongest in the world," said Bush.

Bush talked about how being a governor has shaped his leadership skills.

"If you want someone who's compass points north, and someone who has integrity, and humility, who is also a leader and wants to solve problems, I need your support," Bush said.

Many University of South Carolina students showed up to see Bush speak and Brianna Wood, a political science major, is a big Bush supporter.

"I think some of the other candidates on stage can give you the sound bite that people want to hear that may not be the best thing to say but it gets everyone talking and Jeb isn’t that candidate. He is the one who has a plan and goes into detail about that plan," said Wood.

Bush's campaign manager Linda Willard expected an increase in support from Iowa to New Hampshire and now in South Carolina.

Willard believes Bush must cater his campaign to the concerns of people in South Carolina.

"You can't focus on one group. Certainly in South Carolina the military and veterans are a huge voting block. He is so strong in that area. He has a stronger record of endorsements and understand in those areas", said Willard.

Bush focused his rally speech on the idea that he would be the best Commander in Chief out of the possible nominees.

Sen. Lindsey Graham, the only original presidential nominee who has military experience, made an appearance at the event and told the crowd he endorses Bush.