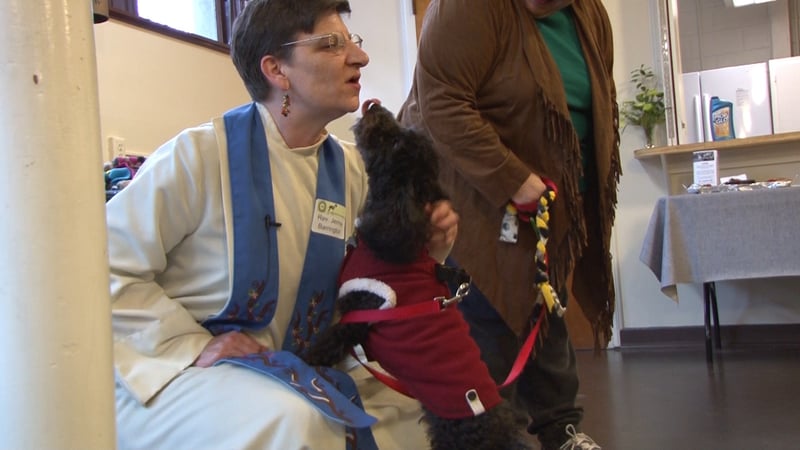 Reverend Jennie Barrington performed the Blessing of the Animals ceremony.

Sid and his temporary owner, Patrick Saucier, attended the blessing in search for Sid's forever home.

The Unitarian Universalist Congregation of Columbia hosted its fifth annual Blessing of the Animals ceremony Sunday.

The Blessing of the Animals dates back to the 13th Century in honor of St. Francis of Assisi, the Patron Saint of the Animals. St. Francis referred to all animals as his brothers and sisters, an idea that members of the Unitarian Universalist Congregation wished to highlight during Sunday's ceremony.

Interim minister the Reverend Jennie Barrington approached dozens of pets, one at a time, blessing them by name and expressing gratitude for their existence and the richness they add to human life.

"I think this is the eleventh or twelfth one I have led," said Barrington. "For many people I have known, their connection to their pet or to wild animals or to the natural world is the primary, or perhaps even sole way that they feel spiritual renewal."

Some pets attended the blessing due to their owner's concerns over medical, physical or other issues. Barrington believes the blessing can have a great positive affect on the animals, too.

"I'm sure that it affirms them and expresses love for them in honor and dignity because they're each unique and they each have their own name and their own circle of family and friends," said Barrington.

Sid was one canine in the crowd. He was brought by his temporary owner, Patrick Saucier. Saucier is temporarily caring for Sid while he assists a local veterinarian in finding Sid a forever home.

"I came of course to get some attention for Sid," said Saucier. "He could really use a blessing right now and needs help finding him a new home."

Sid was abandoned as a puppy. He's now a three-year-old pit bull mix. Despite his sweet disposition, Sid's breed mix is making it difficult to find him a home.

"He's a great dog as you can see- he's very, very smart," said Saucier. "He'd make a great companion and a watchdog."

In a world where a dog is a man's best friend, this past Sunday man gave back in the form of a blessing. A blessing to Sid that he will soon find his very own best friend.