VOICES FROM THE FLOOD: Red tape and tough decisions - DatelineCarolina 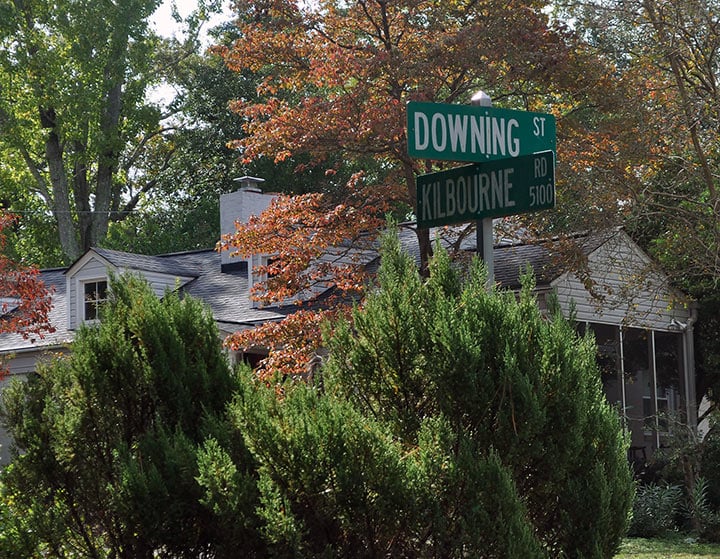 VOICES FROM THE FLOOD: Red tape and tough decisions 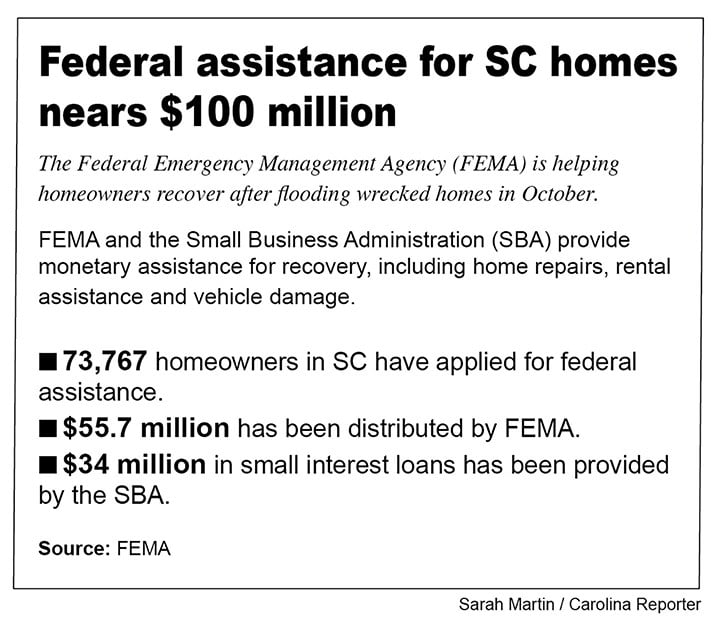 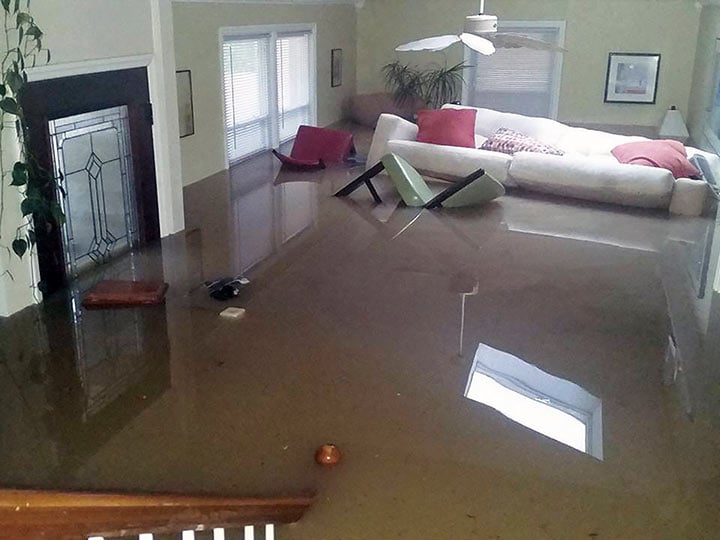 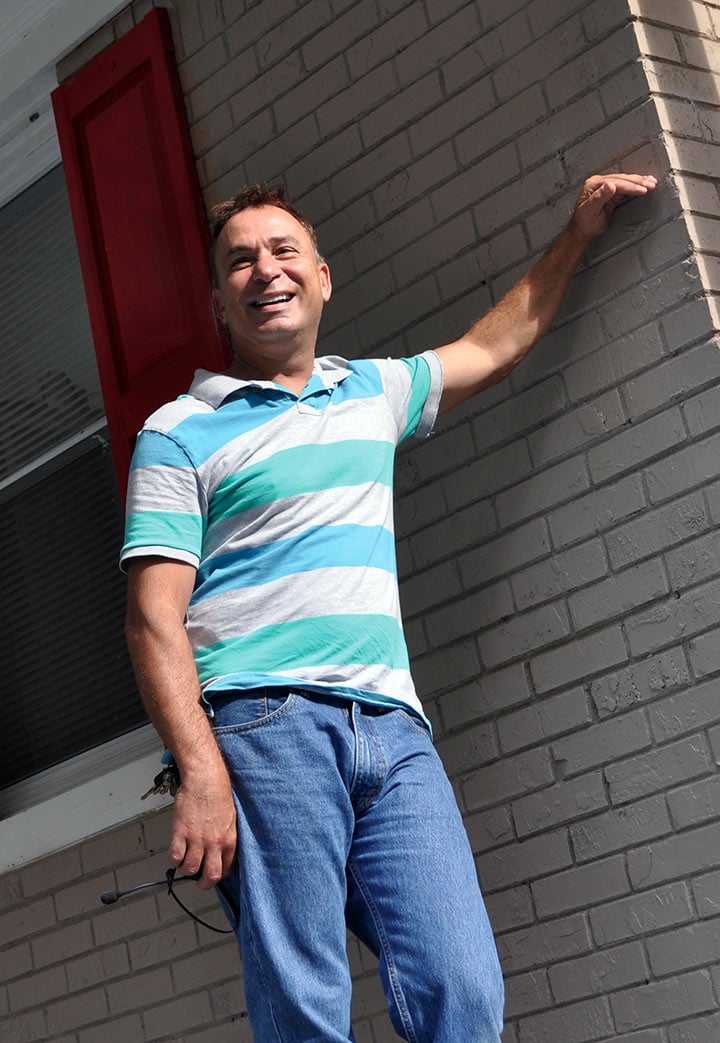 Steve Cohen shows how high the Oct. 4 flood rose at his house. Cohen said the flood demolished his backyard shed, damaged his home and ruined two of his cars.

Then, he said he was swamped with federal regulations that delayed the repairs to his house.

For 25 years, Cohen has lived at 57 Downing St., a pine tree-studded property that overlooks a picturesque swamp. During that time, he added a second floor and a garage with room above that houses a home movie theater and a pool table.

He was safe inside his home, in a neighborhood of mostly modest one-story houses near Fort Jackson, during the worst of the Oct. 4 rains and flood because he could escape to the second floor. But the historic South Carolina flood, triggered by double-digit rainfalls and the failure of a string of public and private dams, wreaked havoc on hundreds of properties from Columbia to Charleston as stormwaters rose with no place to go.

By the time the water retreated, Cohen’s backyard shed was torn from its foundation and broken up downstream, his garage and two cars were ruined, and the lower level of his home was inundated by filthy water and silted mud that flowed through at the crest of the flood.

A licensed contractor who repairs rental properties, Cohen, 55, said he could have started rebuilding his brick and siding on his 2,800-square feet home - which he said is the largest and highest valued property on the street - as soon as the demolition was complete.

But he complained that federal regulations Columbia officials have to follow to remain in the voluntary National Flood Insurance Program, or NFIP, delayed the process. For weeks, he has been living in a house without insulation or a kitchen. Cohen chuckled as he compared his current living situation to his college days, saying his home cooked meals stem from television dinners heated with his microwave.

The city of Columbia has participated in the NFIP since 1981. According to the city, this allows property owners and renters in the city to purchase flood insurance through the federal program. It also means the community is eligible for federal disaster relief funds following a catastrophic flood.

Harry “Leo” Skinner, a spokesman for the Federal Emergency Management Agency (FEMA), said that as of Nov. 1, more than 73,700 South Carolinians have applied for federal assistance. He added that FEMA has distributed $55.7 million in aid to homeowners and over $34 million has been provided in small interest loans through the Small Business Administration (SBA).

“A person may qualify for home repairs, rental assistance if they’re out of their home, or a grant if their vehicle is damaged,” he said. “It’s a case by case basis.”

Cohen posted daily on Facebook to assure friends and relatives that he had made it safely through the historic rain and flooding that damaged and destroyed hundreds of homes across South Carolina and caused at least 17 deaths. His posts form a diary of the highs and lows of the days following the disaster.

“I am absolutely overwhelmed by the compassion and generosity of the community. As we (mostly the remediation crew) work to remove all my damaged stuff and start the process, we have had at least 10 people from churches, community groups and even ‘just people’ who have brought us everything from home baked banana bread to subway sandwiches and pizza and even help with the tear out,” he said. “It is amazing to realize how thoughtful and supportive people can be. As I am usually the one offering the help...I now understand what it feels like to accept it,” Cohen posted on his Facebook days after the flood.”

On Oct. 14, Cohen wrote on his Facebook page: “Due to the massive bureaucracy of the federal government and FEMA, the repairs to my house have been delayed and/or canceled as I first have to follow the 600,900,201 steps to get a permit.”

Although he used exaggeration to make a point, Cohen was irritated with the steps he has to take to get a building permit. He said city officials have been helpful, and he appreciated their patience. Finally, on Oct. 29, he obtained the coveted building permit.

“I’m not blaming anyone in the city,” he said. “The city permit office has been great. I’m blaming the federal government, because it’s their regulations.”

City of Columbia zoning inspector Dean Hendrix, who helped Cohen navigate the city's permit process, said in an email that he understands that homeowners are often scared and frustrated by the federal and city process.

"One point that I do think is of the utmost importance is for all of the victims of the recent event to be made aware of our availability to meet with them on an individual basis, to discuss their property and situation in a professional and specific manner," said Hendrix. That provides flood victims with accurate information, he said.

Unlike many of his Downing Street neighbors, Cohen had flood insurance, paying about $380 annually for coverage. His insurance agent Marilyn Gray of GMM insurance was a godsend, he said, arriving at his doorstep immediately after the flood to see what he needed. However, he believes that his coverage may not equal the amount of money that FEMA is giving to uninsured flood victims, and he estimates that it’s going to cost him about $28,000 to fix his home.

“I pay for my flood insurance, no one gave it to me,” he said. “But because I was responsible and had it, I get nothing else.”

In some instances, Skinner said those who have flood insurance may be eligible for some FEMA assistance if their private insurance does not cover all of their damages.

“Homeowners may get assistance if they have unmet needs that their insurance does not cover,” he said. “FEMA would like to see their insurance information before deciding that, because they can’t duplicate insurance benefits. So they go through their insurance first, and if that doesn’t cover anything, they may be able to help them out.”

Cohen said that although he has been frustrated by the process, he is blessed to have been able to see the way people come together in times of need.

“To see all of the volunteers here helping, it was phenomenal,” he said. “We had more food than  a Greek wedding. And I had one of the best sloppy joes of my life from the Red Cross.”

Cohen also said that through this experience, he hopes the local government has learned how to better handle disasters and is more prepared for the next time Columbia is under water.

“My advice would be: don’t put regulations on people because it only happened once. If it happened again in 10 or 15 years, then put those regulations on,” he said. “But it was a once in a lifetime incident, and they’re leaning too much on regulations. That’s where the delays have been.”