Jacqueline's Story - One Woman's Account of how She Survived the - DatelineCarolina 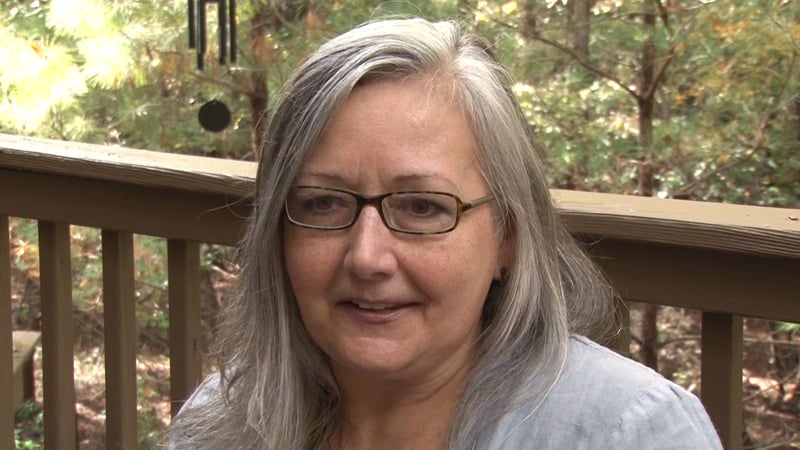 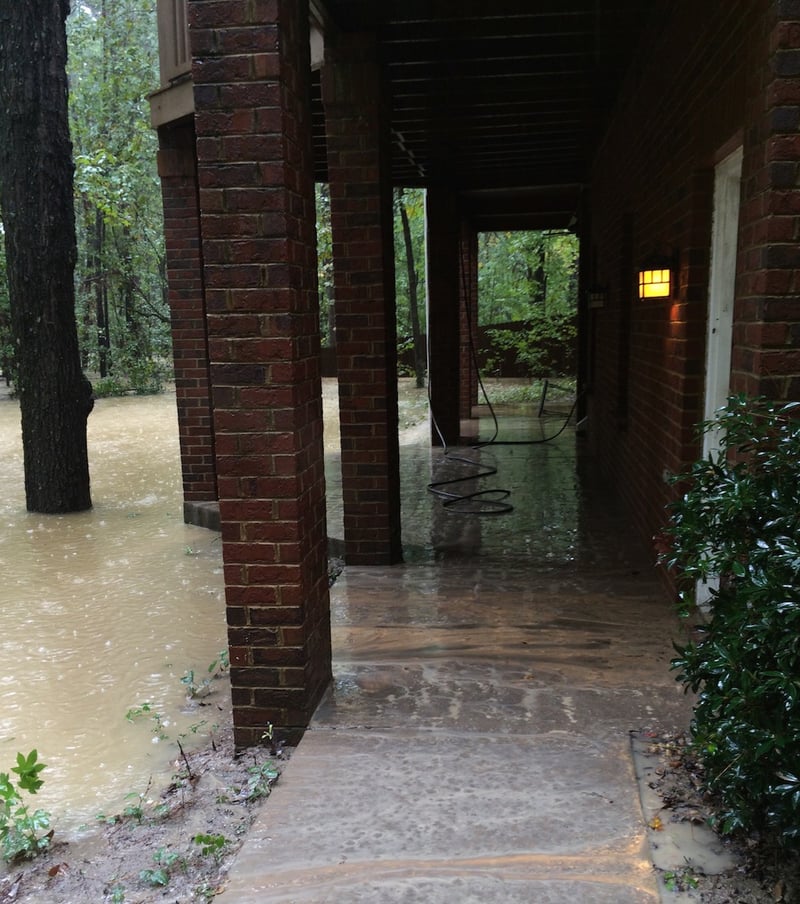 Flood water rested on the back patio with electrical wires dangling from the ceiling. 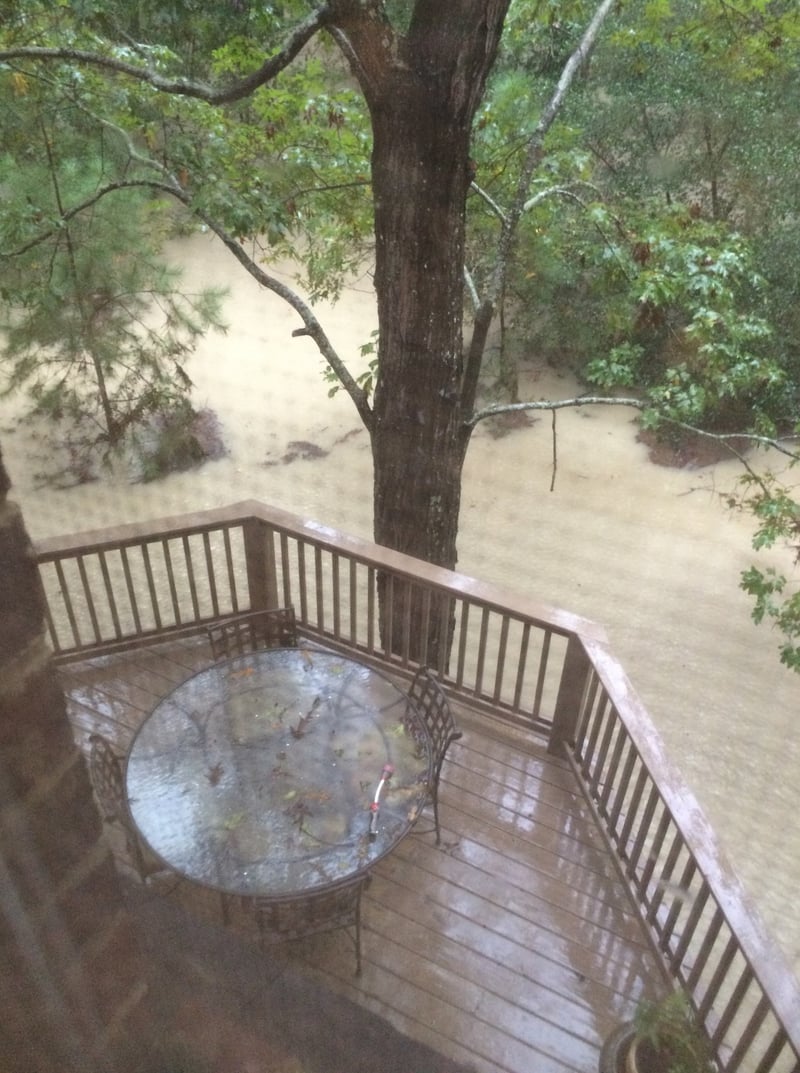 This is a view from the deck. The flood water turned the back yard into a virtual lake. 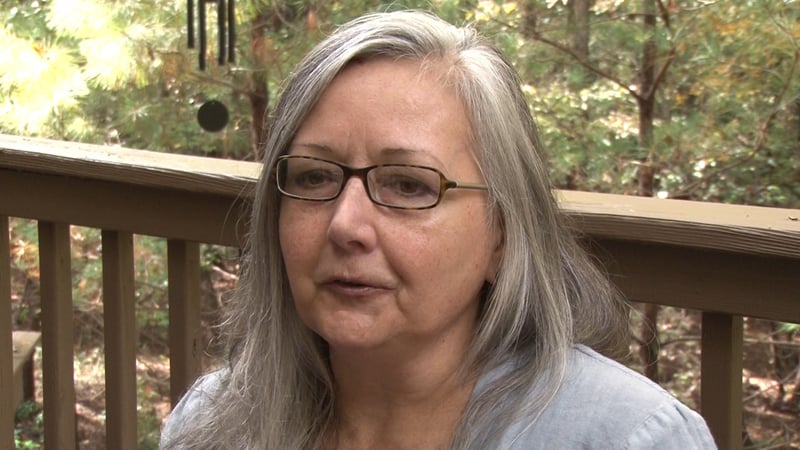 Jacqueline Myers relives the details of what happened when the dam on Lake Semmes collapsed.

Jacqueline Myers lives in the King's Grant community.  She has called the place home for the last 18 years, enjoying her custom built entertainment center,  and deck overlooking the woods.  It was a  peaceful sanctuary.

That peace was shattered on October 4,  when Jacqueline awoke to the sound of rushing water . She did not know what was going on.  She'd had recent renovations done to her house, some water lines had broken, and she thought that's what the noise was.

What she didn't know is that the dam on Lake Semmes  at Fort Jackson had collapsed.  The once placid water of the nearby creek had become the enemy, a true force of nature.

Myers got up, got dressed, then went downstairs to see what was happening.   What she experienced next was frightening.

Water was filling the house.  Debris, and fragments of an everyday life floated by, as water was forcing its way into the house.  It took off doors and anything else in its path.  Myers was still not sure what was happening.  All she could do was watch.

She says she she couldn't just stand there without warning her neighbors.  Myers had to  check on them to make sure they could get out.  She went outside.  The water was steadily rising.  By the time she got back to her own home the situation had worsened.  That's when she made a split - second decision.

Her cats were in there, and she was an avid art lover with an extensive collection.  It was worth more than just the material cost.  It was almost like an emotional tie.

"Do I go back in or stay out and just watch.  I'm not a watcher.  I got back in here and was slinging anything I could back up to the third floor," Myers said.

She had to swim back inside  the house where she was trapped in there for hours.

That  was a harrowing time. Her power never went out even though her  two electrical panels and meters were underwater.   The alarm system and doorbells sang out in a manic harmony.

"I knew  once the water crested the main floor that I couldn't put a toe in there without risking getting electrocuted," said Myers.

She went up to the third floor.

" I just went in there and shut the door, and just laid down and waited  for a while.  I just needed to rest," said Myers

Eventually she came back down after what seemed like hours.  As days passed, and the water receded, she was able to take inventory of what had happened.

She found pieces of insulation dangled from the ceiling, water and mud saturated the carpet.  Doors hung askew, torn off their hinges by the pressing flood water.  Finger size fish, from the  lake were all over the house and the yard.  Myers said Lake Semmes must have just been stocked with the small inhabitants.

Sand and debris had forced its way under her garage doors.  But, when she lifted the doors what she saw was worse.  The entire first floor was practically destroyed.  Her custom entertainment system was destroyed.

That was almost three weeks ago.  Today,  Myers is starting to rebuild.  Contractors and electricians have begun restoring the house she loves.  Boxes of personal items, and remnants of an everyday life dot the floor.  A lone tv sits off by itself in the living room just off the main entrance.

Plastic covers the bottom stairwell to the first level.  Going through it is  touring a construction site.  Two by fours stand in strong defiance to the water that almost took them out.  Bags of concrete and work lights sit on the floor.

A fireplace that was once the center  of the entertainment suite stands out.   Gas logs stacked in perfect unison sit idle.

The steady hum of progress is apparent as men repair the room with their power equipment.  Upstairs, hangers dangle in an empty closet.  A name badge rests gently on a corner shelf, a  subtle reminder of the normality of earlier days.

Myers says people shouldn't feel sorry for her.  She says some houses were hit much harder than hers.

Ms. Myers is staying in an apartment downtown, she goes back home frequently to retrieve what she can.  She takes her life one day at a time, and realizes that the restoration process will happen gradually.

Myers estimates she is one of sixteen homeowners  in her neighborhood whose homes were damaged.  Right now she is unsure of  the exact cost of  repairs to her home.  Myers has received $24,000 in FEMA funds.  She does not know whether she will be able to fully restore her home, but will keep working towards that goal.