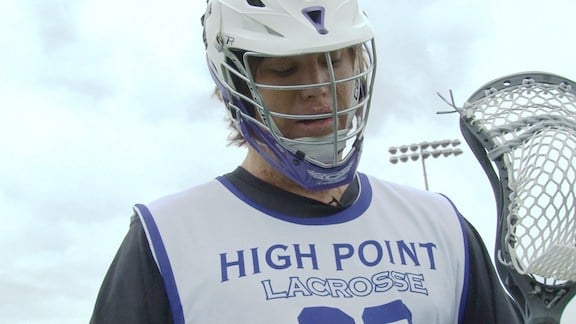 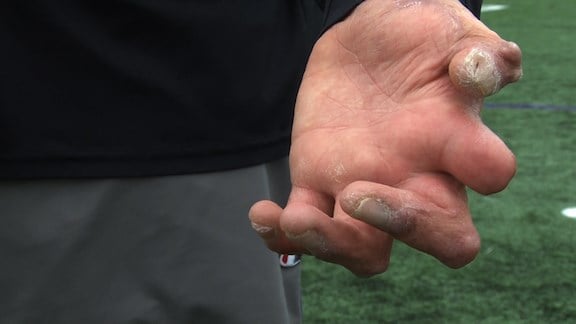 Connor has undergone over 100 injuries since the accident. 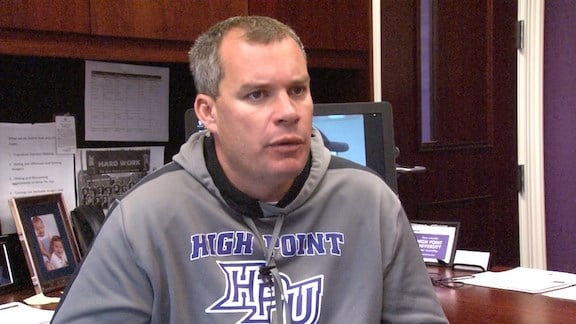 Coach Torpey says Connor has earned his spot on the team by impressing the staff both on and off the field. 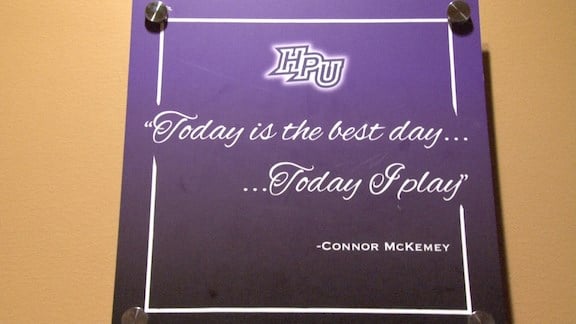 This sign inspired Connor to ask for a spot on High Point's lacrosse team.

Connor McKemey has dreamed of playing lacrosse for a Division 1 college since he was in the fourth grade.  His ability on the field was evident as he was constantly practicing, playing or watching the sport as a young star.  All athletes must work to play at a higher level, but Connor's journey was almost cut short.

On December 21, 2008, a date night by the fire at his home took a turn for the worse.  Connor was preparing a fire in his backyard while also using a space heater.  As Connor poured gasoline into the fire, the flames ignited, somehow colliding with the space heater, causing an explosion that burned 89% of Connor's body.

"I just hear a bang and there is a huge explosion and I feel this burst.  There was a glow around me and I started yelling and running.  I could hear sirens everywhere, people yelling and my mom crying," Connor said.

He remembered being lifted into an ambulance and then...everything went black.

At just thirteen years old, four days before Christmas, Connor was given a less than one percent chance of survival.

"When I woke up I kind of looked around and realized I was in a hospital room or a room that was not mine and there was Valentine's Day stuff all around the room.  At first I was curious because I was like why are we celebrating Valentine's Day when it's Christmas time?" Connor remembered.

He spent the next few days in a dark hospital room, just wanting to be alone.

"It's hard to come to grips with time has passed and you had no part of it.  It was weird for me because I never saw the calendar change from 2008 to 2009," Connor remembered.

But the hardest part of Connor's journey, came down to facing his own reflection.

"I couldn't love myself.  It was that simple.  I couldn't look in the mirror and accept what I saw," Connor said.

His burns were so severe even the doctors were shocked.

"Connor's was the most severe that I have even seen since then.  I have not seen that severity of a burn," said Tara Jensen, an occupational therapist at Levine Children's Hospital.

Connor remembered the moment he stopped looking at himself like a victim and instead saw the reflection of a survivor.

"There is nothing I can do to change what has happened, so how are we going to deal with this heading on?  One of my first things I did was look at my parents an ask them when I could play lacrosse," said Connor.

Doctors told Connor he would never be able to walk again.  He wouldn't accept that diagnosis.  He was going to beat the odds.

Connor remembers learning to stand, then walk and best of all to run.

"I couldn't stop smiling for a couple of days.  I knew that was the final step for me.  I needed to be able to run," Connor said.

He continued to run, right onto his high school lacrosse field where the team won a state championship.

"If I was to see his medical chart and look at his information, I would never believe he could do what he can do today," said Jensen.

Connor is now a junior at High Point University where he has bonded with the lacrosse coach.

Torpey first gave Connor a chance to attack an opportunity as manager of the school's lacrosse team. Torpey hung a quote from Connor after the first time he played lacrosse since his accident in the High Point lacrosse locker room.  The quote read "Today is the best day...today I play."

"That had me thinking all last year," Connor said, "how am I having the best day if I'm not playing?  All I wanted to do was play with the guys.  I wanted to go out to the trenches and work like they work."

The bond between Connor and Torpey gave him the confidence to ask for a spot on the team.  He was willing to put forth all the conditioning and work needed.

"I have already accomplished what was deemed impossible by surviving.  I feel like if I can get through what I got through, I can handle whatever is next in life," Connor said.

Although he was slow to ask, Torpey was quick to answer.

"There was no pause, there was no hesitation.  It was an absolute yes let's get you out there," said Torpey.

Connor spent the summer conditioning extremely hard.  He says he lost around forty-five pounds working to get back in shape.  He is now in his junior year of college playing lacrosse for a D1 school.  His dreams have come true.

He proved the doctors wrong, by playing, walking, standing and even living.