A place to enjoy Christmas 365 days a year - DatelineCarolina 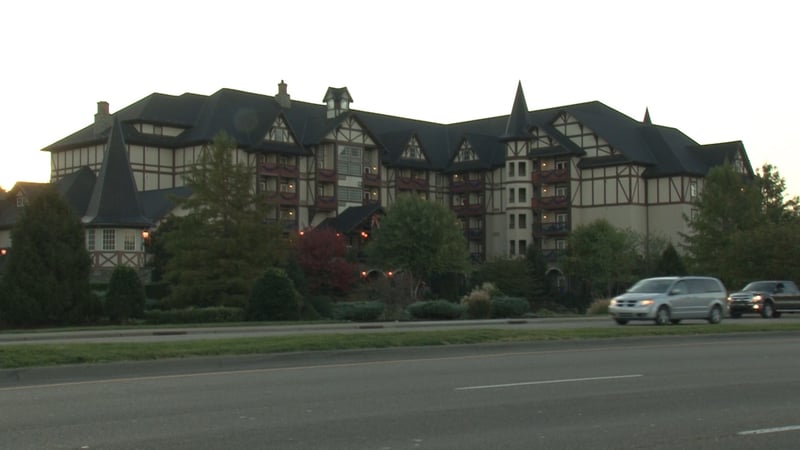 A place to enjoy Christmas 365 days a year 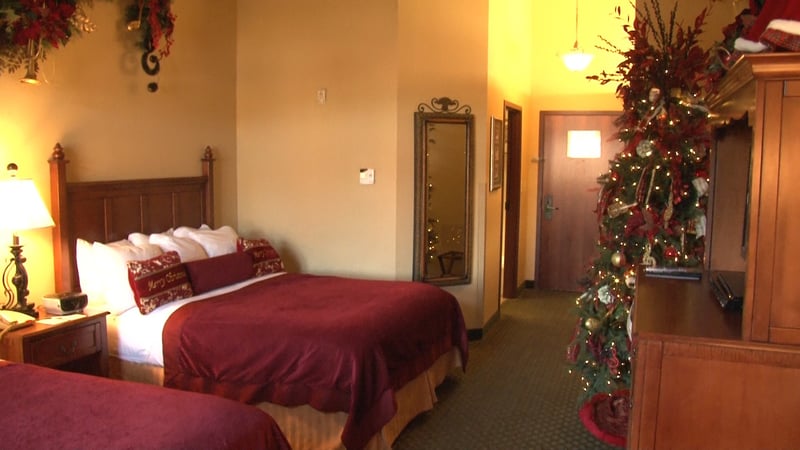 Every room in the Inn includes a decorated Christmas tree. On Christmas Day, guests will wake up to a wrapped present under their tree from Santa. 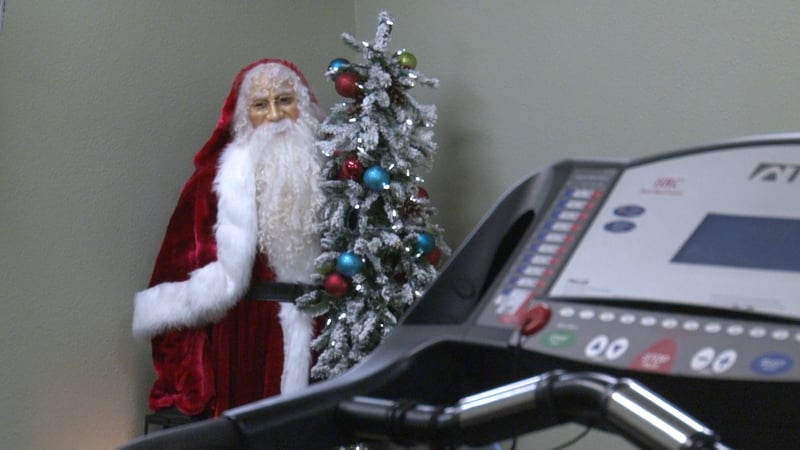 Santa watches over the Holly Health Club or gym from the corner. 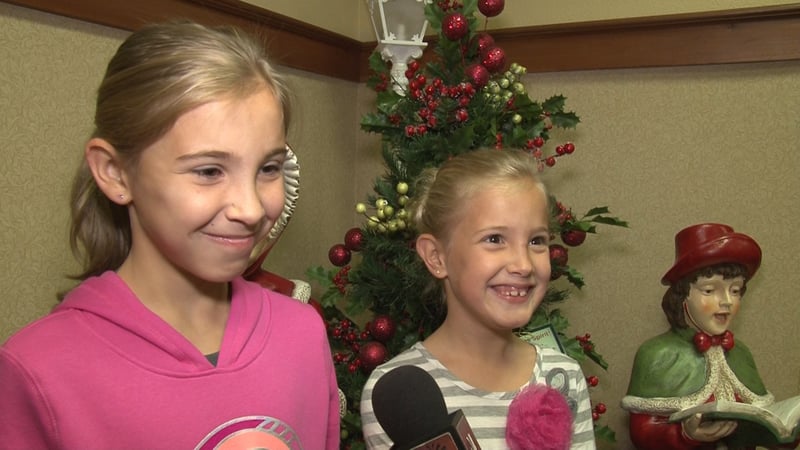 First-time guests Kylie and Kenzie Pendergraft show how excited they were to hear Santa sing to them. 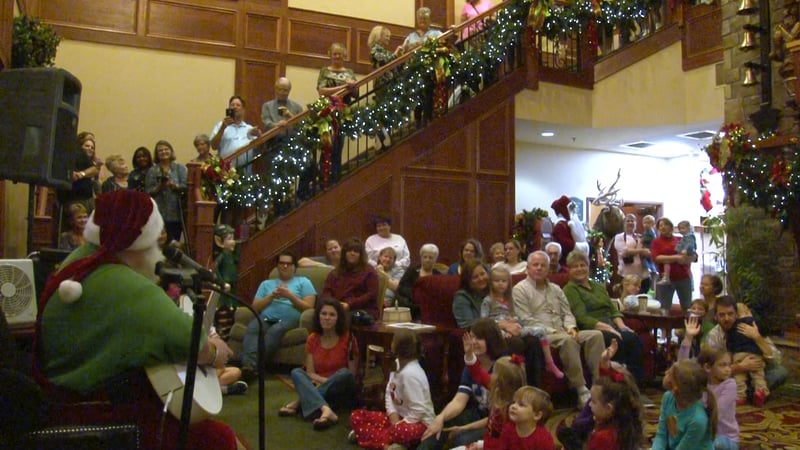 Singing Santa performs at the packed lower lobby of the Inn every Thursday and Saturday night. 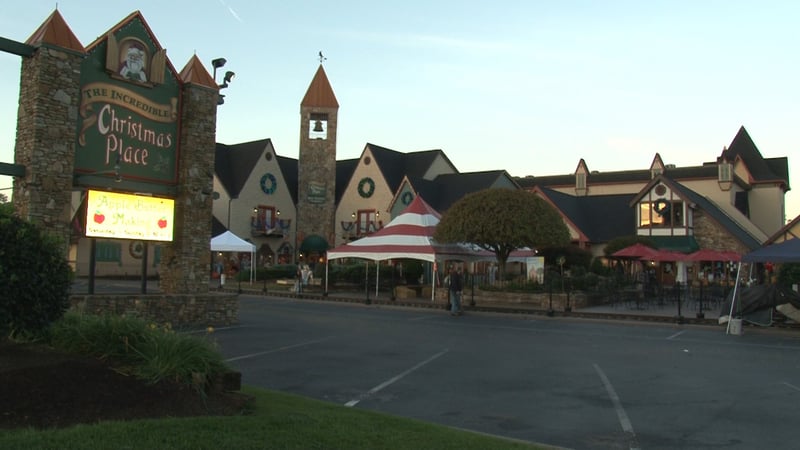 The Incredible Christmas Place is the second largest Christmas retail store in the nation.

Winter is quickly approaching, but there is good news for Christmas lovers who can't wait to start singing those Christmas carols. There is a place, not too far away, where children young and old can celebrate Christmas all 365 days in a year - The Inn at Christmas Place.

The Inn, in Pigeon Forge,Tennessee, has the Great Smoky Mountains all around. And no matter the day or time of year, guests get to celebrate Christmas when they stay the night.

Concierge Dwight McCarter has worked at the Inn since it opened nine years ago. He truly believes Christmas is the most wonderful time of the year.

"It's the most incredibly happy place on earth, and we really do strive and do celebrate the joy of Christmas everyday of the year," Dwight said.

McCarter credits the decorating team for the Inn's "Christmas feeling." He says they change out the decorations every few months and are always experimenting with new ideas. One thing is for sure, there is Christmas as far as the eye can see.

There is a display waiting as you leave the elevator on every floor. Santa stands in the corner of the Holly Health Club. And even the indoor swimming pool has giant ornaments hanging from the ceiling and plays Christmas carols through speakers.

The swimming pool made quite the impression on first-time guest, eight year-old Kylie Pendergraft.

"I like swimming and roasting smores because it was cool," Kylie said.

Roasting smores is just one of the activities the Inn plans for guests. Kylie's first stay at the Inn, her parents, Aaron and Jessica Pendergraft, are a little worried about their daughters.

"It's been a little bit concerning because they think Christmas is right around the corner so they've already started making Christmas lists," Jessica Pendergraft said.

Kylie and her little sister Kenzie denied all list-making actions. But they did write and leave letters in Santa's special mailbox. The Inn has its very own Singing Santa who has been performing here since 1997. Dean Townsend, better known as Singing Santa, says his favorite part of the Inn is seeing all the children's reactions.

"In the summer, because they've heard all their lives that Santa's always watching and they walk in and actually see Santa there," Dean said. "They don't expect to see him in June or July and they're like it's true. He is watching us year round."

The most notable reactions though are from the guests about the Inn's staff. At least that's what guests Hollis and Pam Townsend believe.

"Wow," Hollis said. "They do everything with great detail and intent and with just a passion for Christmas and we love that."

Hollis and Pam could call themselves the Inn's greatest fans. They have stayed 17 separate times for over 54 nights since 2009. They keep coming back for the "Christmas feeling."

Dean says all the staff are specifically taught how to treat their guests.

"We call it being elf-like," Dean said.

Pam Townsend says being "elf-like" has already given the Inn a lasting reputation.

"It's home away from home," she said.

The idea for this home was born right across the street at The Incredible Christmas Place, a collection of shops that have sold Christmas decor all year round for almost 30 years straight. The owners say they were tired of happy customers asking for a bed because they loved the store so much they wanted to stay the night.

The Inn is only nine years old now, but guests stays are memorable.

"We look forward to the next time because we probably already have reservations to come back," Pam said.

And in fact, they do. The Townsends will be returning on Christmas day, less than two months away, for their 18th stay. In the meantime, they dread ever  leaving.

"We don't like to leave but we have to go back to that thing called real life," Hollis said.

At the Inn at Christmas Place, celebrating Christmas all the time is real life, no matter the day or time of year. So go ahead and pull out your stockings and start making those lists because Santa's always watching.