VOICES FROM THE FLOOD: Broken dams and rushing waters ruin the p - DatelineCarolina 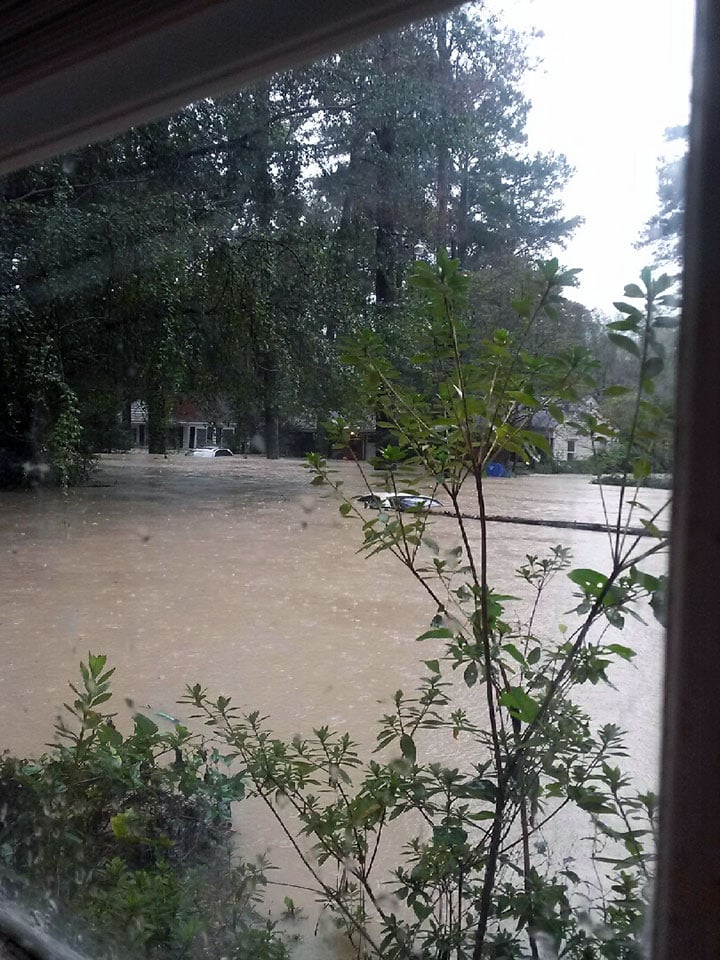 VOICES FROM THE FLOOD: Broken dams and rushing waters ruin the peace of a quiet neighborhood 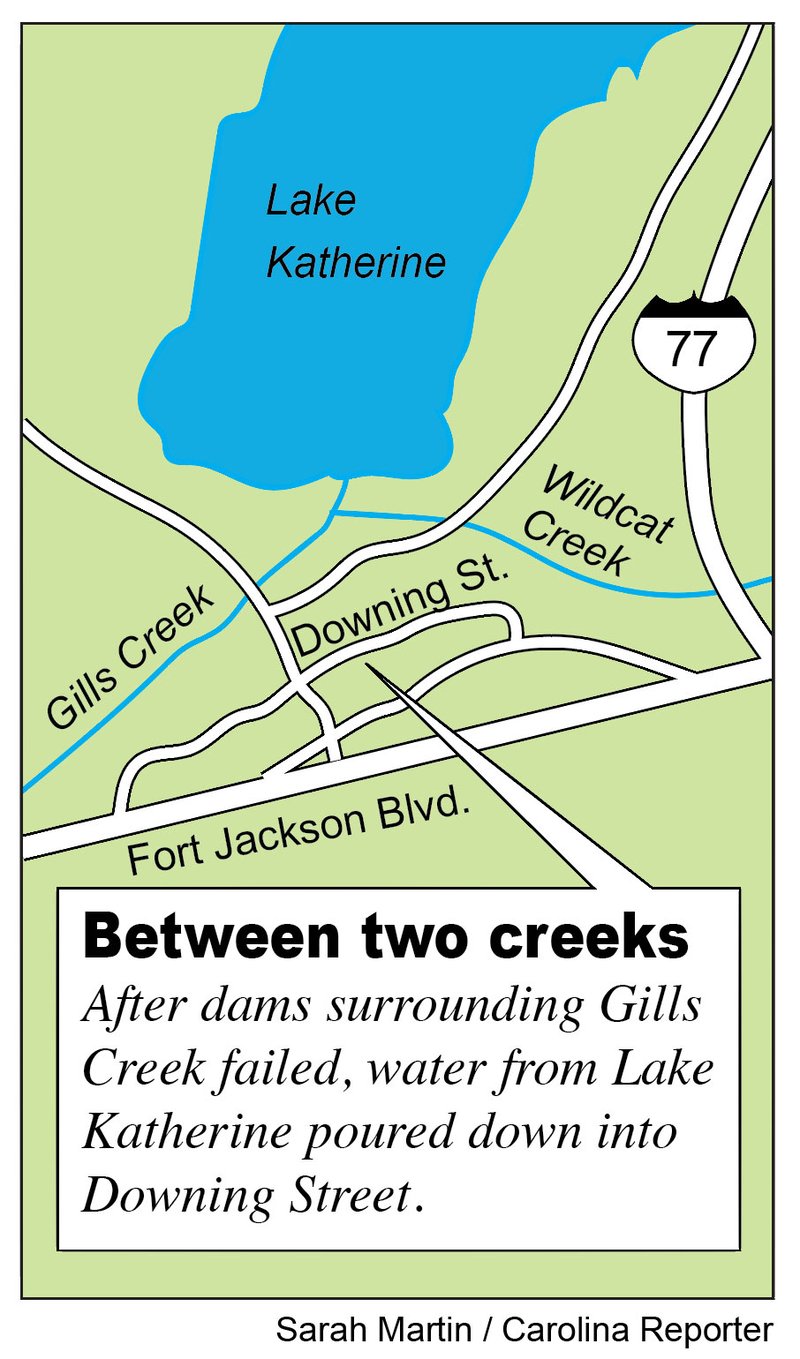 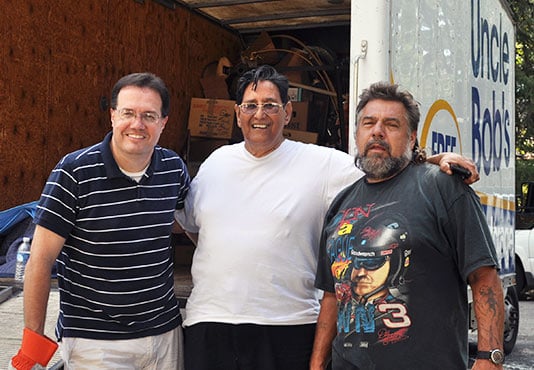 Bobby Greene, his stepdad Frank Guerra, and brother Ronnie Sherbert have been spending days salvaging what was inside of the home during the flooding. 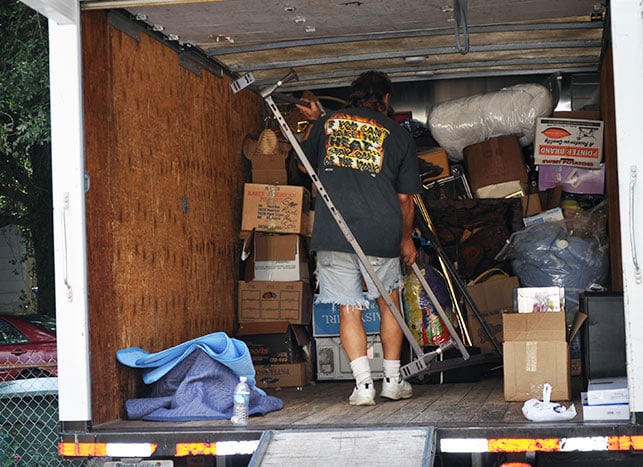 Ronnie Sherbert and his family got help moving their possessions out of their home on Downing Street by volunteers and neighbors who weren’t affected by the flooding.

Bordered by Gills Creek and surrounded by tall, majestic pine trees, Downing Street and its surrounding neighborhood has always been a quiet and peaceful place to live, residents say.

So quiet, Debra Walker recalled, that she didn’t realize her home was flooding early on Sunday morning, Oct. 4, until her 7-year old granddaughter Tailyn asked for help with the television.

People in Columbia were expecting some rain over the weekend, but it wasn’t until dams across Richland County started failing early on Sunday, Oct. 4, that they realized flooding would soon ravage their communities and rival the devastation that followed Hurricane Hugo in 1989. Unprepared for the rising waters and currents, hundreds of homeowners were stranded as their homes began to sink below the murky surface.

“When I came out of the bathroom, water was running down the hall,” said Walker, 47, a cosmetologist at Fort Jackson.

She lifted up a hall heating vent and saw water bubbling up through that as well. Then Tailyn looked out the window and felt confused.

Walked called 911 and waited for rescue along with her 24-year old son, Dartanus Young, Tailyn and her granddaughter’s cousin. Another son had left the house earlier trying to help his girlfriend, who had gone to work early and was stranded near flowing water on Devine Street.

Three hours later, a small fishing boat pulled up to Walker’s house and ferried the four of them up the hill toward Fort Jackson Boulevard to dry land.

“I thank God (for the rescuers),” she said. “I sure would like to know who they were so I could give them a hug.”

The family then stood in the rain as other flood victims were also ferried to the road.

“They were standing, looking puzzled too,” she said.

With both of the family cars underwater, Walker’s family wasn’t sure where to go until a neighbor one street over offered the shelter of her home so the children, who were shoeless, could get dry.

Walker, who was renting the one-story home on Downing Street, said she had no flood insurance on her soaked furniture, but the American Red Cross and other organizations have helped her in the days following the flood. She has also applied for assistance from the Federal Emergency Management Agency (FEMA).

Other than suffering the loss of one of her dogs, a German Shepherd-chow mix named Silver, who she said succumbed after a few days from the chill and stress of the rescue, Walker said one of the hardest things she is facing now is having to give up the peacefulness of her neighborhood and find a new place to live.

Until then, the family will be camping out in their flooded home and trying to salvage their belongings.

Across from Debra Walker’s house sits 79 Downing Street, a one-story yellow home with blue shutters and an American flag flying in the front yard.

On that same Sunday morning, the floodwaters also sneaked up on Betty Guerra, 85, and her husband, Frank, who have lived in that home for almost 50 years. At 8 a.m., she frantically called her son, Bobby Greene, to tell him she was in her recliner and surrounded by water.

“Talk about adrenaline,” said Greene, 50. “Thankfully I had the wherewithal to take my watch off and put on lighter clothes.”

Rushing into his car, he drove from his Forest Acres home only to find roads blocked by rushing water. By 10 a.m., he got to the top of Downing Street and waded into the neighborhood, pushing open the back door and hustling his parents and brother out the front. He held his crying, shoeless mother up and struggled with her through water up to their chests until they reached the yard of a neighbor up the street.

“From the very first day, I told my mom it’s just stuff,” he said. “We’ve still got our memories.”

Since then, the family has been overwhelmed by the kindness of strangers who have volunteered to help them gut and excavate the inside of their home and move their soaked belongings outside on the grass to dry. Greene said the family has also applied for assistance from FEMA to recover what they have lost, but the family home may be beyond repair.

“It has been the most incredible amount of giving that I have ever seen,” he said, adding that the American Red Cross has given them hot meals throughout the week and a woman with small children drove up and down the street handing out homemade brownies.

Their neighbor, Greg Patterson, said he suffers a bit from survivor’s guilt because his home was untouched by the floods. Working as a kitchen manager at a catering company, he said that guilt has motivated him to help his neighbors by providing them with food while he marvels at their resilience.

“These guys lost everything and they can still laugh,” Patterson said.