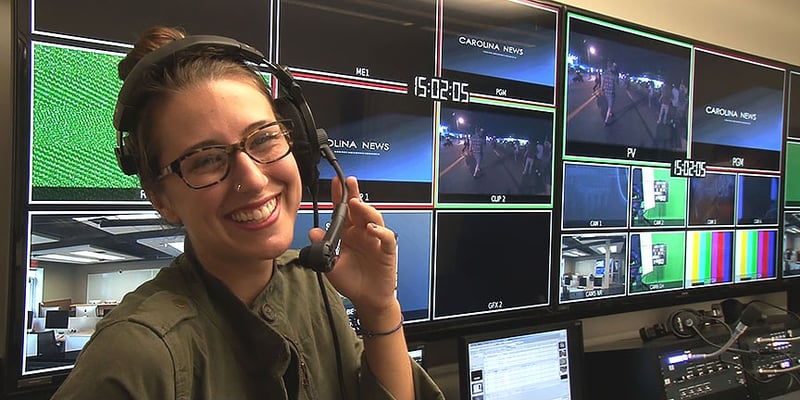 Mackenzie knew since she was little that she wanted to be journalist. While other little girls were playing dress up, Mackenzie says she would wear her mom’s blazers, walk around with a microphone and “report from the sidelines” of her T.V.

As she grew up, and developed her voice for writing, Mackenzie focused her goals on television news, specifically producing. Moving far away from Florida, she found a new home in Columbia and at the University of South Carolina. There she honed her skills as a journalist, interning for the university’s communication’s department, WIS-TV, WCSC-TV and Gamecock Productions.

Mackenzie is constantly plugged into news, following and creating social media on a daily basis. She says she loves the fast-paced nature of news and the every changing routine. She is passionate about producing and making a creative show every single days.

When Mackenzie is not at school, she loves to travel and be outdoors. Her miniature black lab Micah is her favorite hiking companion. Along with her friends, Mackenzie loves to take day trips to Charleston, Greenville, Asheville and Charlotte, to take in the views and shop. She loves to tour breweries or coffee shops to try local beers or coffees.

She also enjoying singing and playing guitar, as well as composing her own music.  Mackenzie started playing the violin when she was four and since then, music has been a huge part of her life. She also plays piano.

She is excited to graduate college in December. She will be graduating a semester early, eager to begin her career in journalism.