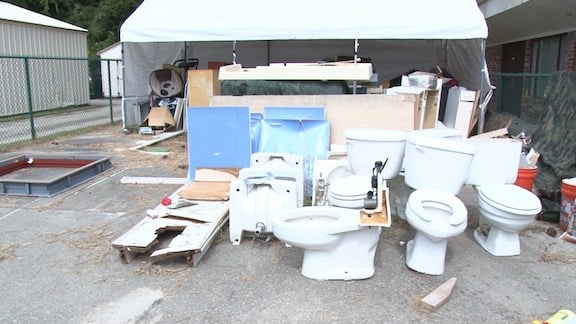 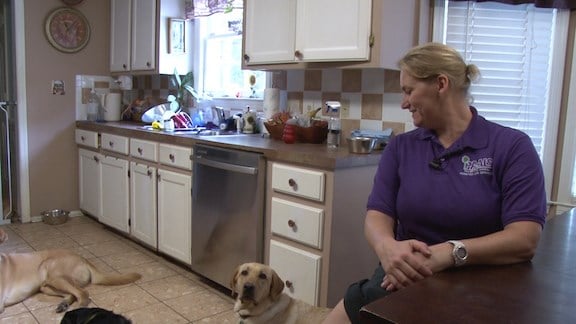 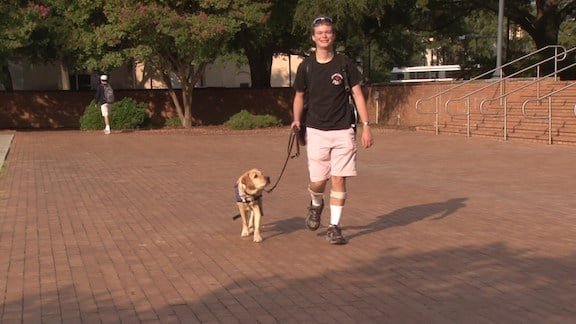 Jory got Daisy two years ago to help him with his genetic metabolic condition, as well as autism.

Palmetto Animal Assisted Life Services is trying to get back on their paws after a sewage pipe burst, flooding their new facility, just 10 days after they moved in.

The organization, better known as PAALS, raises and trains service dogs and pairs them with people in need.

Now displaced, the dogs in training are bunking with Executive Director Jen Rogers. All 14 of them. Crates and dog bowls fill her Northeast Columbia home as she continues to train the puppies for those waiting for service dogs.

Rogers started the non-profit organization nine years ago with a goal of helping.

“My dream was really to use animals to help people, while hopefully benefiting the animals at the same time,” she says.

Nothing will stop her. Not even four inches of raw sewage.

Rogers says the flood was caused by a block in the main county sewage line that is not even located on their property. A clause in their insurance, updated two weeks before the flood, says that sewage floods are not covered.

Left to clean up a mess they didn’t make, Rogers estimates the renovations will cost about $150,000. They are relying on the community to help them raise that money. On their Go Fund Me page, PAALS has raised over $14,000 in just 12 days; proof that people are hearing about their programs.

“The blessing in all of this is that we’re connecting with a lot more people, not in any way I ever would have imagined us getting the word out,” says Rogers.

She’s speaking to anyone who will listen and urging people to share her story and the story of their clients on their social media.

Clients like Jory Fleming, a University of South Carolina junior, who got his service dog Daisy from PAALS two years ago.

Fleming was born with a genetic, metabolic condition. He can’t have fats, so he is fed through a medical feeding pump that he carries in a backpack and connected directly to his stomach. If the pump malfunctions, it sends out a high-pitched beep, meant to alert him to the issue.

Fleming says the beep is difficult to hear if there is any background noise, especially around campus or at sporting events. Daisy is trained to nudge Fleming to alert him to the beep so he can fix the issue.

He also struggles autism, another battle Daisy has been right alongside for.

“She’s made me so much more independent,” he says.

PAALS acted as the perfect matchmaker in Fleming’s life, and so many others. Roger’s goal is to keep matching two-legged clients with their four-legged helpers, even with the setback of the flood.

With the money already raised, renovations can slowly begin on the PAALS building. Rogers is hopeful. It’s hard to be sad with a house full of puppies and a history of helping people.