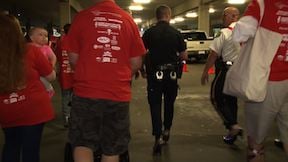 Men put on high heels to walk to raise awareness for sexual assault. 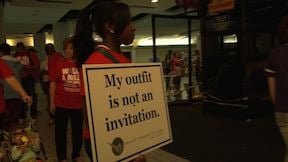 Jesslyn West was among those affected walking at the event.

Hundreds of Midlands residents came out on Wednesday to help raise awareness of sexual assault victims.

Men stepped out of their comfort zones by walking a mile in high heels as part of the "Walk a Mile in Her Shoes" event. Courtland Thomas knows it's important for men to help raise awareness.

"It shows that men can be involved in a positive way when it comes to sexual trauma," Thomas said.

Sexual Trauma Services of the Midlands reports that someone in the United States is sexually assaulted every two minutes, and one in every six women will be a victim.

Jesslyn West is a survivor of sexual assault and supports the walk each year. She says her main goal is to let other victims know that they are not alone.

"Silence empowers the attacker. And when you think about it... exposure is like their kryptonite. So I had to come for everything they took from me and everything they said I couldn't have," West said.

The event was about a serious topic, but it allowed for the community to step up and help victims heal in a fun way. All donations that were raised will go to support victims and help educate the community about sexual assault.