Gamecock women headed to their first Final Four ever - DatelineCarolina

Gamecock women headed to their first Final Four ever

Head coach Dawn Staley thanked all the fans for the suppot and said see you in Tampa! 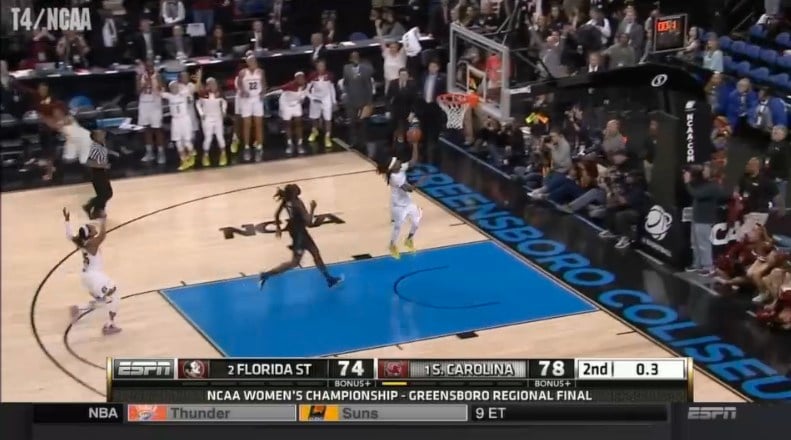 Khadijah Sessions scored the final shot for the historic game.

The Seminoles took control of the game early on strong rebounding and tough defense to gain a double-digit lead.  But Gamecock hot shooting toward the end of the first half cut the advantage to 10 by halftime.

Florida State lead for the majority of the game until Tiffany Mitchell hit the go-ahead lay up to put the Gamecocks ahead 69-67 with 2:00 minutes to play.  Adut Bulgak pulled Florida State to within two points of the lead with a three pointer with less than 20 seconds left int he game.

In the final seconds of the game, Khadijah Sessions stole the ball from Maegan Conwright and finished at the other end of the court for the final basket of the game for the Gamecocks. Sessions is a three-time WPDE Miss Hoop Zone winner, and finished the game with four points, four steals, three rebounds, and an assist.

The Gamecocks were led by Junior Tiffany Mitchell, who scored a game high of 21 points.  Seven of those came in the last two minutes, including a crucial three pointer, along with six rebounds and five assists in the win.

"It's great to take this program to a final four and enjoy this with the team," Mitchell said after the game.

USC got rid of the rebounding edge in the second half, forcing FSU players into hard shots and turnovers.

The Seminoles kept the lead until late in the game partially because the Gamecocks struggled from the free throw line.  At one point in the game they were just 10 of 19 until they began to find their groove in the games final minutes.

Lady Gamecock Alaina Coates finished up with 14 points, A'ja Wilson added another 10 and Asia Dozier hit four free throws in the final 20 seconds for the Gamecocks.

The match was basically a home game for the Gamecocks, the crowd in the Greensboro Coliseum was filled with garnet and black.  You could even hear the USC hype song of Sandstorm blaring form the speakers in the second half of the game.

The Gamecocks received the trophy for winning the Greensboro regional and cut down the nets.

Head coach Dawn Staley thanked the fans for their overwhelming support throughout the Gamecocks' great season and said she looked forward to seeing them all in Tampa, but she warned everyone that they meant business.

"We're not going to just show up and be happy to be there," Head coach Dawn Staley warned of next weeks game.

The win contributes to undeniably one of the greatest seasons in team history.  USC set a record of 34 wins, won a regular season and conference title, had SEC co-coach of the year and player of the year, and now are advancing even further in the NCAA tournament.

USC will head to Tampa, FL. on April 5 to play Notre Dame in the semi-final round.