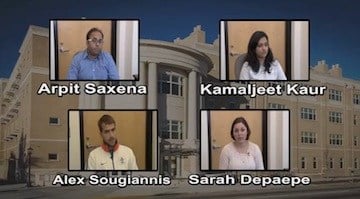 Arpit Saxena, Doctoral student, says Dr. Fayad was his mentor and is still struggling with the loss.

The loss of University of South Carolina Professor Raja Fayad, who was shot and killed on Feb. 5, has left a void in the hearts of many people in the Carolina community.

Some people may still be searching for answers to why the 45-year-old professor's life was cut short at such a young age, but four students who knew him best are searching for different answers.

Arpit Saxena, is a Doctoral student who is one group continuing Professor Fayad's colon cancer research.

“We are continuing his projects,” Saxena said.  “We are submitting his papers because it was just brilliant.  I mean the ideas were just great.”

Fayad's research examines the impact of diet, exercise and obesity on inflammatory bowel disease and colon cancer, and how to better treat it.

Sougiannis has been testing the drug on mice and hopes to someday make a positive impact with his developments.

“Since Dr. Fayad was a MD. his dream, and one thing that we always talked about that he wanted to do, was eventually bring this drug to human trials,” Sougiannis said.

He believes he owes it to the late professor to see those dreams fulfilled.

“It's exactly what he would have wanted,” he said.  “People who know Dr. Fayad would say that if he were here right now and he were telling us what to do in this situation he'd say so what keep going, keep going.”

But, the initiative continuing to examine the professor's ideas is not just something that his former students are taking on.

James Carson is Associate Director of the Center of Colon Cancer Research at USC.  He believes what these students are doing casts a positive light on what the beloved professor should be remembered for.  He has since taken the supervisory role to oversee the research.

“What I've done now is just trying to fill in and help these students to get the resources they need to finish up these important studies and just sort of guiding them,” Carson said.

Fayad's peers and students have dedicated countless hours to ensure his work isn't in vain, but they sometimes still struggle to deal with the tragic loss.

“It's overwhelming sometimes,” PhD. student, Kamaljeet Kaur, said.  “The smell a bleach lingered around for about a month and would just bring back memories.”

Arpit Saxena says coming to work in the Public Health building is a challenge for him.

“Going to the fourth floor is a hard, especially going to the lab.  It brings a lot of memories and it's starting to settle down a bit, but sometimes it's hard man,” Saxena said.

The four say they will push forwards with their efforts despite their mourning.  Saxena says the group will be submitting two research papers to the Journal of Inflammation within the next nine months.  He also says he plans to publish the research papers with Dr. Raja Fayad's name at the top.