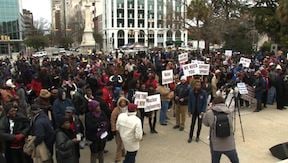 Ariel Wilkins, a South Carolina State student who is concerned about her future. 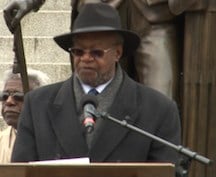 The South Carolina NAACP and other supporters of South Carolina State University protested the proposal to shut the school down Monday afternoon.  The large crowd was urged to not sit back and allow the state legislature to close the university over financial problems.

Hundreds of people gathered on the Statehouse steps, making it clear that closing the school would not just impact the current students and faculty.

"More importantly, what do we do with our children, grandchildren, and nieces,"  Jerry Hannah, a Bulldog alumni, asked.  "I have a niece at South Carolina State.  I'm anticipating going to her graduation.  How can this happen?"

SC State biology student Ariel Wilkins, wondered as well.  Wilkins said, for her, finding a back-up plan if the school were to close wouldn't be a simple walk in the park.

"When you have a certain plan set in place, that kind of throws everything off," she said.  "We have to figure out, okay what's the next step to go about transferring into another school and where do I go from there?  And you have to worry about money.  Most people don't have money, because school is expensive, books are expensive, and most people don't have money to pay for this stuff that they need."

SC State alumnus the Rev. Joe Darby said, being a student from SC State puts these students at even more of a disadvantage.   He said students at the university don't have the same educational opportunities as other students around the state due to poor funding.

His words resonated across the cheering crowd, but Darby had one final message to legislators.

"This is not the Jim Crow South," he exclaimed.  "Not only will South Carolina State remain open, but the state will start treating our students equally.  We are sick and tired of just getting by!"

Monday's protest was held less than a week after some House members voted to suggest shutting down South Carolina State until the 2017-2018 school year.

This plan lets the state to assume more than a $100,000,000 of debt the university has accumulated over the years.

The university is now raising funds in efforts to pay off its debt.