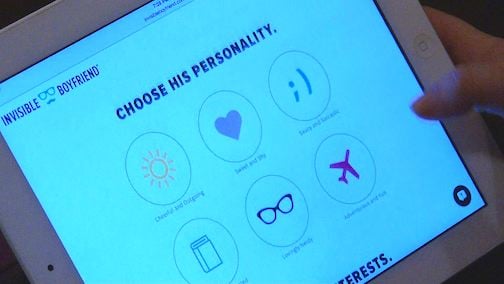 Elyse Bryman is skeptical of the app

Popular dating apps typically match users based on personality traits they share. But what if you could customize exactly what you wanted in a partner from the ground up, and you could communicate with this imaginary partner?

The Invisible Boyfriend app allows users to create an online character who will look to their friends and family like a real significant other. The process includes selecting a photo, age, interests and even personality traits. Users must also choose their reason for using the app. The choices range from quieting nagging family members to avoiding a persistent co-worker. Then, the communication begins. For $24.99 per month, the "boyfriend" (or girlfriend) will send 100 text messages, 10 voice mails and one hand written note.

The new technology brings to mind a science fiction movie. Some have compared the app to the 2013 film Her, in which the protagonist falls in love with his phone's operating system.

University of South Carolina student Jax Bouchar gave it a try, and was impressed with the results. Her new match (Hunter, age 21) send her a text message immediately. He even included a smiley face.

However, Jax's friend Elyse Bryman was not impressed. She even has some advice for those looking for love through the app.

"I would recommend some therapy," said Elyse.

For those brave enough to give it a shot, the app announced new communication forms to be released soon.