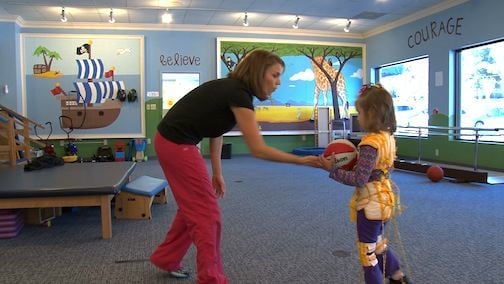 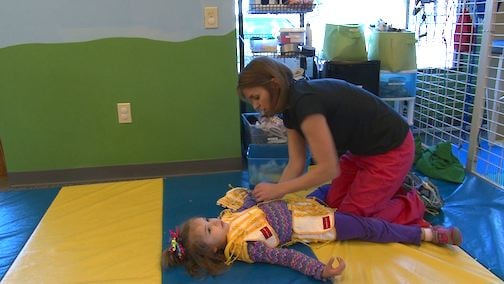 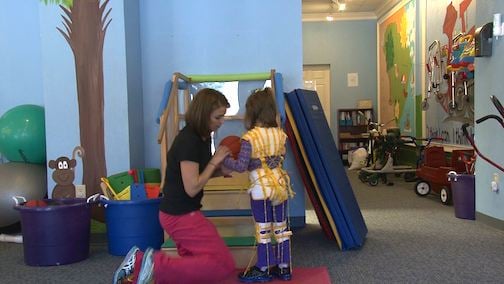 The TheraSuit helps to retrain muscles to work properly. Exercises, such as walking up stairs, are part of the therapy process.

Five-year-old Sophie Zimmerman suffers from severe developmental problems that affect her ability to walk and talk.  She has been receiving physical therapy since she was six months old.  Sophie's mother says she has seen improvements over the years.

Even though Marcey Zimmerman has seen Sophie make progress with regular physical therapy, she thought there was something more out there.  After she was introduced to the TheraSuit, she saw even more improvements.

"She just put the top part of the TheraSuit on Sophie during the evaluation and immediately Sophie was walking straight.  She could lean over and pick up something off the floor and then just stand back up, where before, she couldn't do that.  Even just five minutes before," said Zimmerman.

The Therapy Place, on Covenant Road in Columbia, says it is the only clinic in South Carolina using the TheraSuit.  It is a full body suit that consists of a vest, shorts, and knee pads.

The TheraSuit mimics muscles and retrains them to operate the correct way.  Resistance bungees help to imitate muscle action.

"The suit is applied so we can do more functional tasks.  With the intensive therapy program, we can get more repetitions from the kids, which is typically what the children lack in their traditional one hour session for therapy, thus improving their gross motor skills and functional independence," said Stoner.

Dr. Harley Morgan works for the Division of Pediatric Neurology at USC and he has been Sophie's doctor since 2010.  Dr. Morgan said he is excited to learn more about the TheraSuit because it is beneficial in a lot of ways.  He has also seen the excitement from Marcey Zimmerman.

"The TheraSuit seems to improve that particular muscle, nerve, brain interaction, and thereby, you can sort of reinforce appropriate movements and make the child move better," said Dr. Morgan.

The TheraSuit is an intensive form of therapy that requires action three hours per day, five days per week, and for three weeks.  Medicaid does not cover this cost, and everything is billed directly to the family.  One suit costs $2,500, and the physical therapist must be certified to operate the TheraSuit.  The Therasuit it exclusively manufactured, imported, and distributed by TheraSuit LLC.

The cost to use the suit for the recommended time of three hours per day, five times per week, for three weeks is $4,500.  The cost of one therapy hour is $100.

There are benefits to using the TheraSuit but it comes at a very high price.  Sophie only uses the TheraSuit once per week as a part of her physical therapy.

"We cannot afford it because I can't work outside the home because of her, and I think it's going to be great and I want to help with trying to get funding, too, for anybody," said Zimmerman.

"I think it's something that would be good if all children like Sophie could at least try it out and have more access to this type of innovative therapy," said Dr. Morgan.

The Zimmermans are hoping to find a way to pay for Sophie to take part in the three week intensive therapy program with the TheraSuit.  Until then, she will continue to use it as often as her family financially can, in hopes that she will become increasingly more stable.