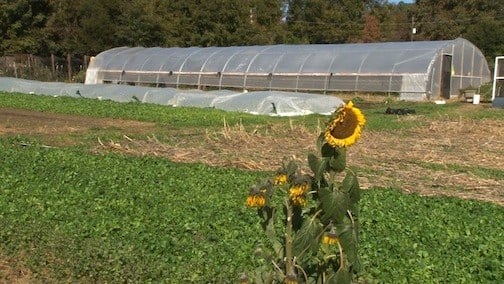 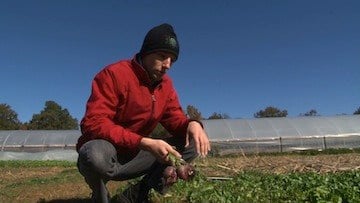 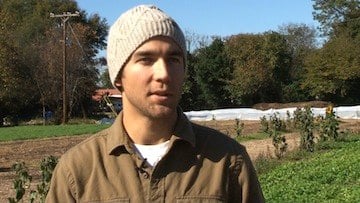 Temperatures are dropping below freezing and the City Roots Sustainable Farm in Columbia is using precautions to save their crops. They are trying to extend their growing season into the winter using things like agricultural fabric, tunnels, and greenhouses.

Bobby Weslowski has worked at City Roots for five years. He uses the fabric to cover crops like lettuce when temperatures drop below freezing.

"What it does the ground heat is retained in this little pocket that's created. You get about a four to six degree buffer with the rogue cover," Weslowski explains.

The fabric is spread across the field with metal stakes pushed into the ground to keep the material off the crops. The sunlight can peek through the material so that crops can grow and eventually be harvested.

Crops like kale are considered cold hardy crops and can survive in the cold because of their thick leaves. Other crops like carrots and radishes that are root vegetables, are protected from the cold air by the ground.

"The ground itself retains a good bit of heat from the daily sun it gets. The ground temperature is usually warmer than the air temperature," Weslowski says.

"It's kind of like our refrigerator it's easier to keep them cool and it actually extends the shelf life," farm owner Eric McClem says.

McClem opened the farm with his father more than five years ago.

"It's a four season production we do that through season extension stuff like rogue covers, and high tunnels, and green houses, and that allows for a farmers cash flow to stay a little bit more even," explains McClem.

"These tunnels, this being our low tunnel, you're able to either plant something that would not normally grow during that season or you can actually start your season a little earlier," Weslowski says.

Tunnels do provide more protection but they do not have a heat source like greenhouses.

"This greenhouse used to produce micro greens sits around 60 to 65 degrees," Weslowski says.

They use fans to maintain an even and consistent temperature in the greenhouse and help to distribute moisture.

City Roots will try to produce and harvest their winter crops, but even with all their precautions, they say a significant snow or ice storm could wipe out their fields.