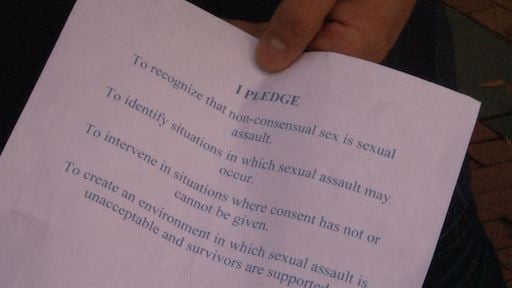 Students must understand the "I Pledge" statement before signing the banner. 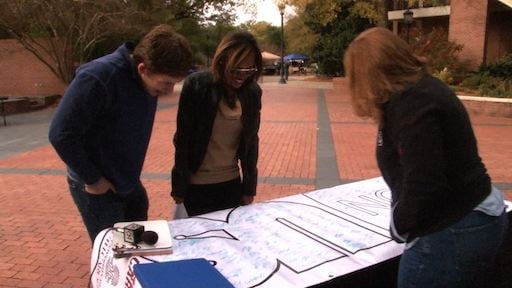 Ian says it is important to sign the banner.

University of South Carolina's Student Government is encouraging Carolinians to take the "It's On Us" pledge against sexual assault. By taking the pledge, students will promise to recognize that non-consensual sex is assault.

USC is in competition with Clemson as a part of Rivalry Week to see which school can collect the most pledges. Pledges will be counted on social media using the joint hashtag #ItsOnUs #UofSC.

Maggie Reid is a USC Junior who is not a victim, but says bringing attention to sexual assault with just a signature is important.

"I have friends who have not been to the level of rape, but they've been in a scenario when they've been in danger and needed someone to be there for them, and I think they knew how to handle it. But I know that other people don't," said Maggie.

People hear about sexual assault crimes but USC's Interpersonal Violence Coordinator Michelle Eichelberger says this is one of the least reported crimes.

She says it's going to take more than just one person to stop this crime from happening.

"It's not just one person's responsibility, and it's going to take a whole campus to spread on to the whole world to address it and let people know we aren't going to accept this type of behavior," says Eichelberger.

Student Government Representative Ian Shannon says although this is a competition with Clemson, he appreciates being able to join forces to combat a serious problem.

"We're working together for an issue that's so serious, and it's so cool to be in a situation where we have such a rivalry but we can come together and support an issue as prevalent as this," says Shannon.

This is a competition USC hopes to win but it's also a bigger issue that needs to stop says event organizers.

The winner of the "Its On Us" pledge drive will be announced at the Carolina-Clemson game on November 29.