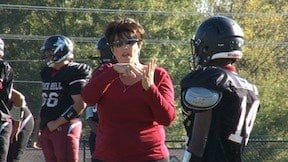 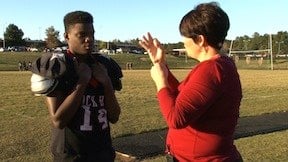 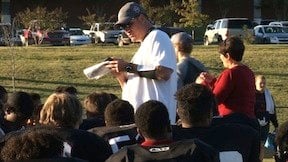 Head coach David Pittman has coached Kevi Hardin for two years and has been his teacher.

Kevi Hardin is a sophomore on the Rock Hill High School JV football team, and he has been deaf since birth. He says he decided to play football because he likes playing with his friends and playing offense as a wide receiver. He has caught five passes this season, and the team has a six and two record.

He plays with the help from Angie Shafer, his interpreter, who helps break the silence on the sidelines through sign language.

"I am the only girl on the football team. I've been stepped on, I've been hit, the ball has hit me several times. But the boys are really good about protecting me. Mrs. Shafer get out of the way, Mrs. Shafer watch out. It's been a really great experience," says Shafer.

Shafer is with Hardin eight to ten hours everyday in and out of the classroom. She is critical to his success on the football field.

"You see her running up and down the field, from drill to drill, play to play, and making sure she's right there to tell Kevi," said Head Football Coach David Pittman.

Pittman says that Shafer is like a team mom, and has probably learned more about football that she ever wanted to.

"I didn't know anything about football. I knew there was a defense and offense. I knew you made six points, one point. When they started talking flats, I was like sorry I have a girl question. Ok another girl question," said Shafer.

She has been signing on the sidelines for Kevi since seventh grade, but she says some things get lost in translation.

"Just like earlier I wasn't close enough to him to call the play, and he was like you can hear! And I was like I know, but I can't hear him! So it's hard. The frustrating part is trying to get the plat into him quickly," said Shafer.

Football and Shafer are helping Hardin become a more independent teenager. He is successful on and off the field because he is overcoming a disability and not letting it define him.

"Football has brought him out, I think with his personality. It's helped him make friends at school. But Kevi is just a joy to be around," says Pittman.

Pittman says Hardin is a good football player. He says his best qualities are that he tries hard everyday and doesn't let mistakes get to him.

Kevi says he would like to play college football and go onto the NFL. Safer says she would like to see him go to Gallaudet University, which is the world leader in deaf education for college students.

"We are working towards independence with him. And I think football gives him that. You know I can call in the plays and tell him what to do, and the coaches can coach him but I can't make the touchdowns," says Shafer.

Kevi is working on getting his first touch down. Shafer plans to stay on the sidelines for the next two years, because she wants him to succeed and be productive in society.