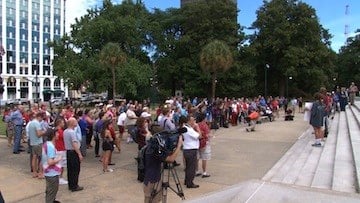 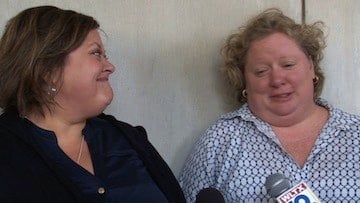 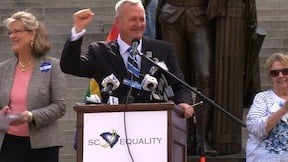 On Monday the U.S. Supreme Court refused to consider an appeal from five states whose same sex marriage bans had been ruled illegal by lower courts.  One of those decisions involved Virginia from the Fourth Circuit Court whose jurisdiction includes South Carolina. The protestors argue the decision means South Carolina's ban is illegal as well.

Colleen Condon and Nichols Bleckley were the first same sex couple to apply for a marriage license in Charleston County at 9:00 a.m. Wednesday. Probate Judge Irvin G. Condon accepted the application as a result of the actions of the U.S. Supreme Court.

South Carolina Attorney General Alan Wilson immediately asked the state Supreme Court Order to order countys not issue same sex marriage licenses. The state's high court has not yet responded and it is unknown when they will address the issue. State law requires a twenty-four hour waiting period before issuing marriage licenses.

Condon and Bleckley drove straight to Columbia after filing for their marriage license to participate in the rally. They were excited not only about their marriage, but for others who have been waiting a long time.

"This is not about us this is about everybody's right to marry the person they love," Condon says.

Both are from South Carolina. They want to marry in their home state, surrounded by family and friends.

The rally was lead by S.C. Equality on the Statehouse steps. Jeff Ayers spoke at the rally as the chair of the S.C. Equality board of directors.

"Who's ready to get married in South Carolina," he shouted to the crowd.

"We are just trying to get the message out to Attorney General Alan Wilson and governor Nikki Haley this battle is won, this battle is over, just give up on it and don't waste anymore tax payers money," Ayers stated.

Ayers lead the crowd from the Statehouse steps, across the grounds to Attorney General Alan Wilson's office. The crowd chanted as they marched a petition with 5,000 signatures directly to Wilson's office. Malissa Burnette was one of the marchers who handed over the documents as a Columbia attorney and chair of the S.C. Equality Litigation Task Force.

"We delivered all 5,000 petitions and hopefully they aren't in the shredder yet," Burnette reported.

Condon and Bleckley advise others to go out and get a license.

"They think we are different but we are not to be quite honest we are just like two other people in love we want to plan our wedding," Condon exclaimed.

The couple picked up their marriage license exactly twenty-four hours after they applied for marriage Thursday morning.