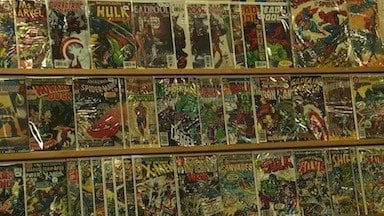 Supah Pop gave people the chance to check out vintage comics they wouldn't see anywhere else. 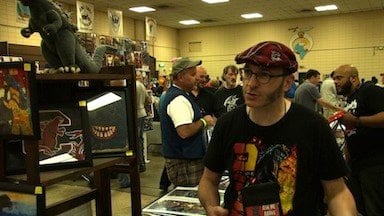 Sean McGuinness has been reading comics his entire life and is glad to see them gain mainstream exposure.

Hundreds of people, many of whom were in costume, flocked to the Jamil Temple this weekend for the first Supah Pop Comic Convention.

Here you could browse through over a quarter million comic books that would stretch for over two miles if lined up end to end. You could also meet artists and illustrators, as well as some of the zombies from the hit TV show "The Walking Dead".

The recent success of Marvel movies like The Avengers and Captain America shows comic books have become part of the mainstream, allowing comic book readers to come out of the closet and step into costume at events like Supah Pop.

Lyn Powell has had his batman costume for over twenty years, and he was glad to have a chance to dust off the cape and become the caped crusader once again.

"I've had this costume since 1990, but I usually only wear it for Halloween or appearances at children's hospitals. I can't tell you how much fun it is to have something like this going on in Columbia where I can put on the mask and become the bat," said Powell.

Sean McGuinness, better known around Columbia's art scene as That Godzilla Guy, was thrilled to see an event like Supah Pop come to Columbia.

"This is awesome! You've got comics, you've got artists, you've got celebrities, and you've got a huge crowd of fans, all under one roof in South Carolina. It's just incredible," said McGuinness.

Comic books may be cool now, but he can recall a time when comic books were not so accepted by everyone.

"When I was growing up, I got beat up and made fun of for reading comic books. Now I can say I was at the forefront of bringing it into pop culture," he said.

Judging by the crowd that was at Supah Pop, comic books have definitely solidified their spot in pop culture.