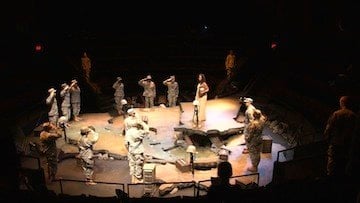 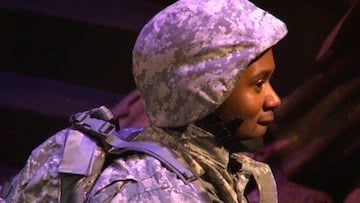 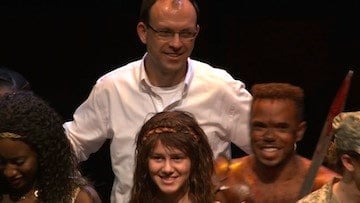 USC's Theatre Department is performing "Ajax in Iraq" for the first time this Friday night. The actors take the audience overseas and into the war in Iraq. It focuses on the struggles Marines face both in war and once they return home. Some of the actors brought their personal experience to their characters on the stage.

Jonathon McClinton is a theatre student who served in the Marine Corps from 2006 until 2014.

"When I found out it was 'Ajax in Iraq' I was like oh I've been to Iraq," exclaims McClinton.

In fact, he spent four years as a marine in Iraq.

"There is nothing like being over there and experiencing it yourself..." stated McClinton.

McClinton says he shares his experience with his fellow actors to make the play honest.

"You can't necessarily put yourself in my shoes. You can definitely relate and feel you know similar to what I'm feeling and that's what I feel these actors have done," says McClinton.

McClinton performs multiple roles, but is accompanied on stage by another veteran. The lead character of Ajax is played by Leroy Kelly, who served in both Iraq and Afghanistan. Kelly was a member of the Marine Corps until 2012.

"Ajax in Iraq" opens this Friday night at the Long Street Theatre. Peter Duffy directs the play and says a veteran really enhances the performance.

"They are two experts in what it is like and what it feels like. You know the sand in your shoes all the time and the heat and what that feels like," says Duffy.

Duffy believes the play pays respect to those serving in the military.

"It's important because it asks us as Americans what's our responsibility to these men and women who go off and fight for us," Duffy says.

He focuses not only on the struggles in Iraq, but also here at home.

It's a very real fear that affects McClinton.

"Because of the dialect in the play it's very similar to what I've heard and said a few things myself so I was afraid it might hit a little too close to home but it's actually been very therapeutic so it was good," explains McClinton.

These veterans bring to the stage their real struggles and are re-enacting all that they have been through.