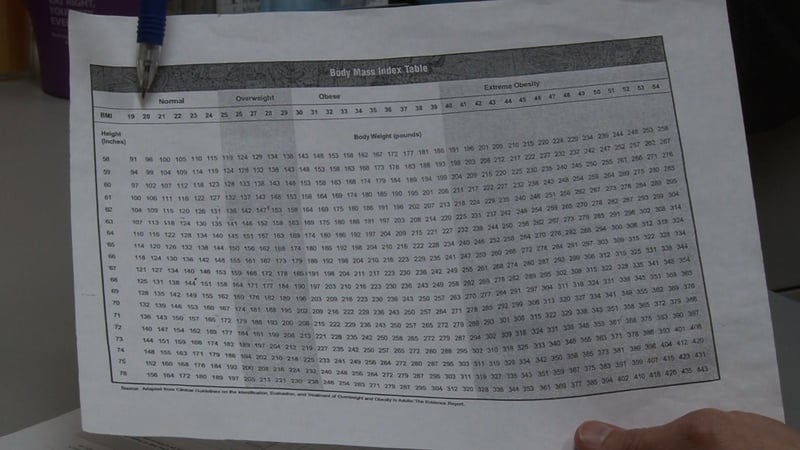 Michael Wines developed Orthorexia Nervosa and almost had to be hospitalized after taking what he learned in a nutrition class too far.

Dietitian Lisa Money believes the BMI is a standard that works for most people.

Summer is just around the corner and many people are kicking their fitness routines into full gear. One guide people use is a chart with standards for how much you should weigh depending on your height called the Body Mass Index.

The BMI simply calculates weight and height to determine if someone is obese or not. It does not take muscle weight, which weighs more than fat, into account.

Michael Wines is an Exercise Science major at USC who believes you shouldn't let a number define you. He took what he learned in a nutrition class too far his sophomore year trying to get his BMI down.

"I developed what was called Orthorexia Nervosa, which is an eating disorder of quote unquote, clean and unclean foods. Dropped about 130 pounds, was almost hospitalized," he says.

Orthorexia Nervosa is a psychological condition that can cause the heart, liver and kidneys to shut down.

An article on the nationaleatingdisorders.org website says Orthorexia Nervosa is a term which literally means "fixation on righteous eating." Orthorexics become fixated on food quality and purity.

Wines is now healthier and wants to be a personal trainer, but he cautions those who see the BMI as the gold standard.

"For the average person BMI is just one tool in the toolbox and it definitely shouldn't be anything you consider the be-all end-all. I think more you should look at your daily energy levels, your performance," Wines explains.

USC nutritionist Lisa Money says the BMI is a standard that works for most people.

"Besides for athletes and other people with high body compositions, it's a good screening tool. So that's the place to start," Money says.

Students and faculty at USC can get their body fat percentage calculated for free at the Strom Thurmond Fitness Center.

Despite conflicting opinions about the usefulness of calculating BMI, Wines and Money both believe you should do what makes you the happiest.

"Go by the way you feel and what makes you happy, I mean, if you're 5% body fat and miserable it doesn't really matter if you look that great," Wines says.

Money says being healthy is ultimately what matters most, something that Wines had to learn the hard way.