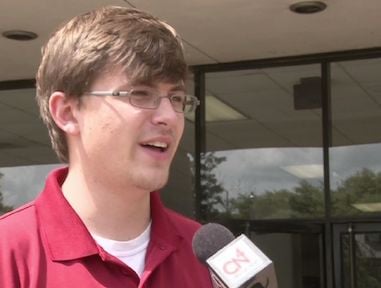 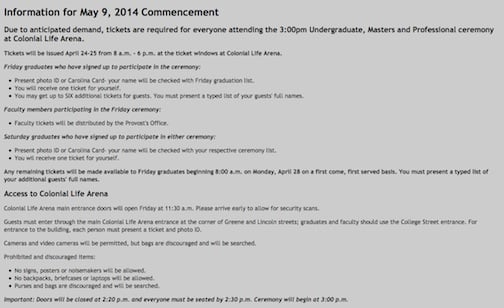 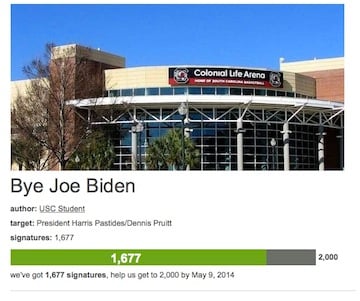 University of South Carolina seniors graduating on May 9 will now be able to invite six guests instead of four to graduation. Vice President Joe Biden will be the keynote speaker.

On Tuesday, many students discovered through the university's commencement website that due to anticipated crowd, they will only get four tickets each family members waiting to attend the 3 p.m. Bachelor's & Master's Ceremony on Friday, May 9.

Word spread fast and phone calls flooded the school's Registrar and Board of Trustees' lines. Some students say they were left on hold for over an hour.

The university's commencement ceremonies are normally open to the public and do not require tickets.

Wes Hickman, USC's chief communications officer, said the university received many calls expressing concern that four tickets would not be enough, leading a request for an increase in seating.

A lot of graduating seniors found out about the last minute changes and are not too happy with the announcement.

"It's pretty bad, because I only graduate from college once and if my family doesn't get to see it, they're missing that opportunity to share with me," said one senior.

"For one, they should have given more of notice, two, you have to open up standing seating or something," said another.

" I'm upset about it. I've spoken with a lot of classmates. There are people who have booked trips across the country, hotel rooms, it's really not fair. You're putting us in the back seat to Joe Biden. it's not fair. It's not his graduation. You're making it his show, and it should be our graduation," one USC senior said.

Senior broadcast journalism student Brie Nurse took to the internet to make her voice heard. She created a petition demanding the university find a happy medium and make changes to what she describes as an "unfair and disheartening decision".

The voices of Nurse and her fellow graduates was heard and yesterday afternoon USC released an updated ticket ruling on Tuesday evening increasing the number of guest tickets from four to six.

Nurse spoke exclusively to Carolina News after the increase was released,

"I'm excited that the limit is now six, but based on comments on the petition along with my own personal wishes, six is not enough."

Friday graduates who have signed up to participate in the ceremony:

Any unclaimed tickets will be available on April 28 at Colonial Life Arena starting at 8 a.m.

Hickman says he is still hopeful that anyone who wants to attend graduation, will be able to.