People gathered at Columbia City Hall to hear "The Insiders" speak about their situations. 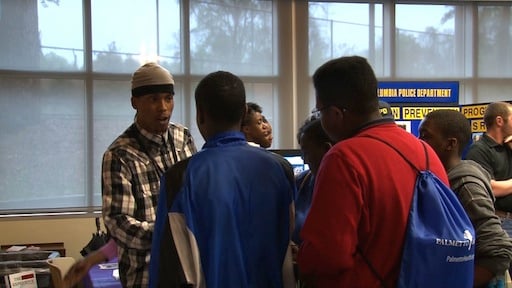 Jairus Glover is serving an 18-36 month sentence for burglary and unlawful possession of a pistol in the Department of Juvenile Justice prison. He says he got into trouble by hanging out with the wrong crowd who led him down the wrong path.

"It started with stealing, got to bigger things like breaking into people's houses, stealing people's cars, things like that. Now I'm committed to my 21st birthday at the Department of Juvenile Justice," said Glover.

But Jairus is using his past to help others learn from his mistakes. He is part of a group called "The Insiders," a group of inmates in DJJ who travel around South Carolina encouraging young people and promoting community awareness of juvenile crime.

The Insiders spoke at Columbia City Hall as part of National Youth Violence Prevention week. The six panelists gave a first-hand account of life behind bars, hoping their stories will help motivate teens to stay out of trouble.

"I just wanted to give back to the community by the things I did and look back and try to change things so other people don't go out and do those same things," said Glover.

As part of National Youth Violence Prevention week, Columbia also hosted a fair at Earlwood Park to showcase many organizations looking to help youth stay out of trouble. Organizations had displays and talked with young people and parents about different programs they offered.

Columbia has a higher crime rate than the state average, and South Carolina's crime rate is 44 percent higher than the national average. City leaders hope all of these opportunities like hearing "The Insiders" will help steer youth in the right direction and prevent violence.

"To save one child. The ultimate goal, if we can save one child that's great. We want to save as many as we can but if we can turn one away from drugs and gangs we think it's a success," said Lieutenant Ron Felder with the Columbia Police Department.

Glover is also hopeful kids will listen to what he has to say and take advantage of the resources the city is offering.

"For the kids, it's very important for them to get this because they could easily end up in the same place that I'm at or even dead," said Glover.

He and other Columbia leaders hope these efforts will help one teenager stay on the right path and make positive decisions.